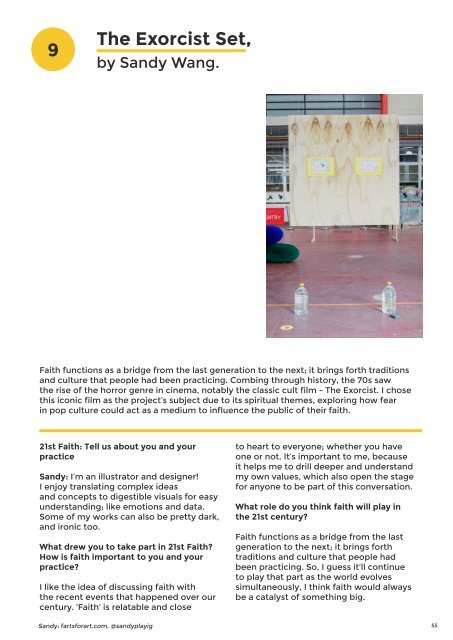 We are a collaborative research project, investigating and questioning faith as a human feeling.

This publication presents 32 creative projects created for an exhibition in October 2017 at The Workshop, Lambeth.

Faith functions as a bridge from the last generation to the next; it brings forth traditions

and culture that people had been practicing. Combing through history, the 70s saw

the rise of the horror genre in cinema, notably the classic cult film - The Exorcist. I chose

this iconic film as the project’s subject due to its spiritual themes, exploring how fear

in pop culture could act as a medium to influence the public of their faith.

21st Faith: Tell us about you and your

Sandy: I’m an illustrator and designer!

and concepts to digestible visuals for easy

Some of my works can also be pretty dark,

What drew you to take part in 21st Faith?

How is faith important to you and your

the recent events that happened over our

century. ‘Faith’ is relatable and close

to heart to everyone; whether you have

one or not. It’s important to me, because

it helps me to drill deeper and understand

my own values, which also open the stage

for anyone to be part of this conversation.

What role do you think faith will play in

Faith functions as a bridge from the last

generation to the next; it brings forth

traditions and culture that people had

been practicing. So, I guess it’ll continue

to play that part as the world evolves

simultaneously, I think faith would always

be a catalyst of something big.