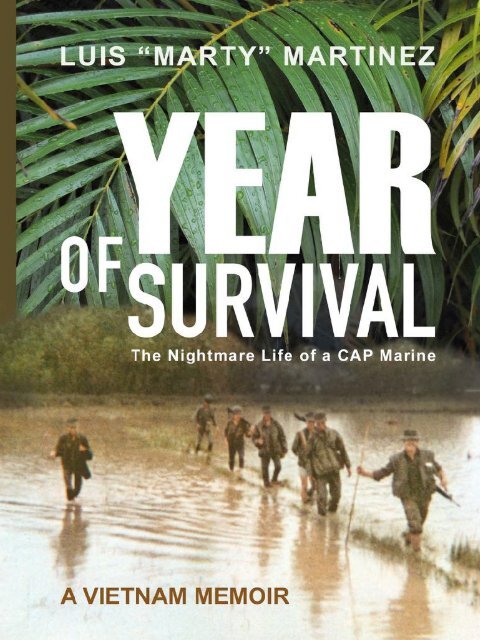 1970, and I mean that both literally and figuratively. I was assigned to a

villages and hamlets off the Red Line (Highway #1 was called

20 miles south of DaNang, Vietnam. This was a 24/7 survival challenge.

We weren’t sent out into the jungle for missions. We lived in the jungle.

Our mission was to survive. I still remember my first night.

The sheer weight of the gear and ammunition I carried was overwhelming;

my legs trembled when I walked. I struggled to keep my balance in the

pitch black of night. I worried about being ambushed and not able to

disentangle myself from the straitjacket of weapons and gear strapped to

my sweat drenched body. There was a moment when I held my hand up

to flick sweat from my brow, and I could not see it. It was like being

completely blind. There were no lights in the bush. No stars. No

reflection. It was just pitch black darkness, and man let me tell you…” it

was a real bummer.” We knew we were surrounded by the enemy. In

fact, there were VC residing in the villages where we lived. I recall a time

laceration on his leg. A couple of nights later we ambushed and killed 2

VC. One of them was the village chief. He still had the bandages that Doc

wrapped his wound with on his leg.

Within one month in the bush CAP 10 had engaged in several firefights,

exposed an enemy soldier embedded within our ranks. This happened

before my first letter home even got back to Lorain, Ohio. At age 21 I was

struggling with emotions tied to my family’s low-income status, staying in

college and chasing girls. By 22 I was struggling with the emotions tied to

a war I couldn’t run and hide from: losing fellow Marines in my arms,

On one occasion, we went on patrol and against tactical basics returned

villagers had laid out as a bridge to cross an irrigation canal. When we

eturned to the canal Gary, BooBoo, and Dakota, who was carrying the

PRIC 25 radio, started across the plank. Little did we know that while we

were out blowing empty bunkers, the VC had hidden a rigged command

detonated 105mm artillery round under the far end of the plank. In

addition, they had set a kerosene-soaked command detonated claymore

mine in the bushes on a rice paddy dike in front of us. They waited for

Dakota to walk over the 105 round when it was detonated. Frenchy,

out our communications and grenade launcher at the same time. I was on

skyward and we splashed into the canal.

the murky bottom of the channel. But, each time I tried to reach it I

needed to do an underwater dog paddle in order to stay erect. I had tied

leg to stand. Desperate to surface for air I was able to use the knife to cut

the rope and I was able to reach my rifle. I could hear gunfire on the

surface so I stayed underwater as long as I could. Gasping for air, I

surfaced and despite the dinning sound in my ears, I could hear the guys

When I looked back I saw Frenchy floating face down, arms stretched out

as if on a cross and blood saturating the water around his head. The

sucked at my boots. When I reached his unconscious body I turned him

pinched it tightly. In a half-conscious state, he murmured, “Ah It hurts” so I

let go and was surprised that the bleeding had stopped. I pulled him

toward the edge of the canal where Caiado, our dog handler, jumped in.

hand in lifting him up onto the bank. As I pulled myself out of the canal I

aid and in the commotion, I could see Gary excitedly talking on the radio

calling for a medevac helicopter. While we waited in a defensive perimeter

Boosinger spotted a kerosene-soaked claymore mine that had been aimed

at us. It had malfunctioned when detonated and broke in half. Had it not

malfunctioned it would have fired 600 steel bearings into our column.

weeks later when discharged from the 95th Evacuation Hospital in

in the middle of the night. The Russian roulette nature of war and the

care attitude. Except for Dan Gallagher, the CAP Marines I knew that were

birthday. Rippetoe, Gaffigan and Ross were killed by PFs our “allies.”

Even though some have passed, this book could not have been

undertaken without the support of 7th Company members that lived the

Scottie Shirley, Al Simmons, and others that are mentioned in this book.

We survived horrors that no human being should ever face, but we made

it. Some of us crippled. All of us traumatized. So when I say that I came

to know the darkness in Vietnam, I mean complete and utter mental and

physical darkness. I consider this memoir the first ray of light to shed light

on those memories. My hope is that it can attest to the insanity of war and

honor the heroism of the Patriots asked to fight it. All incidents and

Marines that have graciously shared them with me.