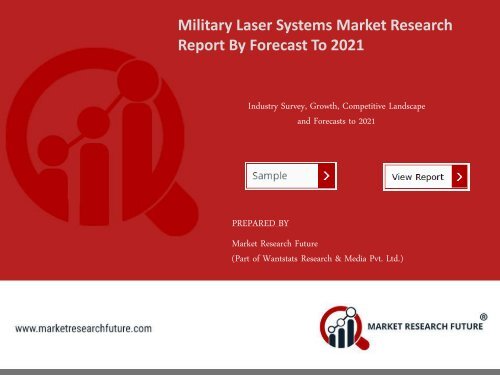 weapons and infrared countermeasures. Laser weapons are capable and utilized as both lethal and non-lethal weapons.

there has been a huge spending on such military laser systems R&D programs.

The laser systems are being utilized for offensive as well as defensive operations by the military for various air, ground, naval

and space operations. Laser based weapons are also used by different countries and is considered as the weapons of the

future. This demand for military laser systems and mainly the laser based weapons has mostly helped the growth of the

military applications, mainly the laser based weapons. In 2014, China unveiled its laser cannon system that could shoot

down UAVs from more than a mile away with a very high accuracy. More than 40 percent of the China's laser research and

development capability is focused towards military applications. China has also been investing heavily in the development

Similarly, the Indian Ministry of Defense has regrded the development of advanced weapon and DEWs as a top priority for

its roadmap till 2020-2025. India has been working on the development of such laser weapons and aims to make it

accessible to fighter aircrafts, naval destroyers and submarines by 2025. It is also working on DEWs to improve anti-ballistic

missile capability. India's LASTEC, a laboratory developing lasers and related technologies, belonging to the DRDO, has been

working to develop such laser weapons for the Indian Armed Forces.

The laser systems are also expected to pave the way for next-gen weapon systems. The laser-based weapons could be used

as a defense system for manned and unmanned aircrafts, to save it from heat-seeking missiles. DARPA in cooperation with

Northrop Grumman and Lockheed Martin has been actively working towards the development of such systems. It aims to

develop such laser weapons to defend the aircraft from EO/IR guided surface-to-air missiles. Ultimately, the goal is to

develop a next-gen laser weapon system, that would be ten times lighter and more compact than the current high power

chemical laser systems, and which could be mounted on a pod to the manned aircraft and UAVs.

vendors; in terms of cost, technology, and to win major military deals and projects in various emerging and established

markets. To survive and succeed in such an intensely competitive environment, it is crucial for the vendors to develop highly

capable and efficient laser systems and also need to involve in major laser weapon development projects. Five of the key

For the convenience of the report and enhanced understanding; the military laser systems market is segmented in to three

laser systems. The R&D spending on such military laser systems has also been increasing which has helped the growth of

the global military laser systems market. For example, DARPA in the US has been involved in such R&D projects. In the US,

such R&D activities are focused around many projects related to military applications such as rangefinders, infrared

plan), also has a substantial amount of funding towards the 'photonics programs' which includes the lasers, and is expected

to fund more than US$137 million per year through 2020. The rise in terrorism and conflict has also increased the R&D

efforts for such military laser systems and weapons.

At Market Research Future (MRFR), we enable our customers to unravel the complexity of various industries through our Cooked Research Report

enable our clients to see more, know more, and do more, which help to answer all their most important questions.

In order to stay updated with technology and work process of the industry, MRFR often plans & conducts meet with the industry experts and

All Rights Reserved. This document contains highly confidential information and is the sole property of Market Research Future. No part of it may be