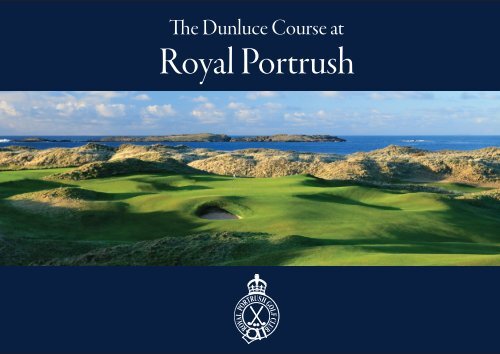 to the famed Dunluce Course at Royal Portrush. The reason for the adjustments is

Open. However, the overriding principle has been to ensure that the members

and visitors enjoy the Dunluce Course even more than before.

As part of the overall course review exercise, investigation of the evolution of golf

in 1932. That has highlighted a fundamental issue. When Harry Colt designed

the Dunluce in 1932, the clubhouse was over 1,200 yards away from the present

clubhouse in the town of Portrush. Two of his original holes - the key 1st & 18th

holes - are now lost. They provided a link from the old clubhouse to the old

11th) did not exist. Although Harry Colt was consulted over the addition of the

replacement 8th and 9th holes and approved of them, they were the conception

of the Club’s professional, P.G. Stevenson, and Colt was not involved with the

detail of the holes. This shows that Harry Colt was open to adjustments to the

Would Harry Colt advocate such a change if he were alive today? We believe that

he certainly would. Not just because the prize of The Open awaited but also due

to the fact that the adjustments strengthen the layout. He would always look

strongest land which Portrush has to offer.

an increase in quality of the course? There is little doubt that the two new holes

are far superior in natural character compared with the old 17th and 18th holes.

That, on its own, has led to the course receiving even greater plaudits than it did

course for all golfers.

The Land Of The Old

the course to make it possible for the 148th Open to return to Royal Portrush.

Claret Jug when the event was held over the links in 1951. The R&A was clear from

put in place to support the Championship. Following an intensive study of all

options, the inescapable conclusion was drawn that the old 17th and 18th holes

holes, the conclusion was that two replacement holes for the Dunluce could be

Course. This is a tremendous arena for two dramatic and iconic holes which should

Mackenzie & Ebert have the utmost respect for the work of the

great architects of the past and especially that of Harry Colt. Any

The land in the ‘Triangle’ providing two of Harry Colt’s original holes was fine links ground. It

would have provided wonderful start and finish holes for his course.

The old clubhouse sat high on the hill right in the heart of the town of Portrush.

The Long Course used to be a completely different configuration and occupied land now taken up by the Valley & Skerries Courses.

The ‘Triangle’ - No longer part

both courses but his focus was on the original clubhouse location.

longer part of the course

If there had been a criticism of the Dunluce Course over the years, it was that

the dunes over the first 16 holes. That has been addressed by creating two new

holes that continue to improve Colt’s finest links. The dunescape which they

occupy is second to none, giving rise to two holes which are more in-keeping

with the other 16 holes on the course.

Firstly, a new par 5 hole plays down into the valley, over the route of the old

6th hole of the Valley Course and rises gently up to a new green, hugging the

enormous dunes to its right. ‘Big Nellie’, a huge bunker on the old 17th hole,

has been recreated to the right of this new hole. This fits very well into the

Secondly, a new par 4 hole has the potential to become one of the most

Dunluce Course. From a tee position close to the old 5th tee on the Valley, the

tee and fairway to a green close to the existing 8th green.

throughout the world of golf.

The Changes To The Original Dunluce Holes

Along with the two new holes which have been created, the other sixteen holes

merited. This was carried out in conjunction with officers of the Club and The R&A.

However, any improvements implemented have borne in mind the fact that the

course is used as a private members’ facility for the vast majority of its life. Hence any

of the members. A few back tees have been added which will not be used by the

affects, on the whole, the landing areas of the elite players rather than the handicap

holes on the course other than adding a back tee at the famous Calamity. Without

exception they have all withstood the test of time. However, adjustments have been

made to every other hole although a number of them are relatively minor in nature.

In terms of lengthening the holes and the course, there was no target set for the

overall length of the layout. Instead each hole has been considered on an individual

basis and to ensure an even balance of lengths of holes throughout the course.

team. There are some wonderful shapes to admire. There was further evidence of

which did not benefit from his attention to detail as these holes were added later.

old 8th (new 10th) did. Hence the 10th green was reshaped during the works to

provide it with a surface which we think Mr Colt would approve of.

As with the design concept for the two new holes, any adjustments to the existing

holes have paid respect to the original design philosophy of Harry Colt. He made

very sparing use of bunkers at Portrush. The nature of terrain and the penalty of

the rough would have rendered over reliance on bunkers unnecessary. There is

of bunkers removed. That is far lower than any other Open venue. Turnberry is the

closest having 87 bunkers with the majority of the venues having around 100,

last time The Open was held there!

of the best players. That has proved to be the case at Royal Portrush. The most

the green further back. That seemed to be a natural opportunity to implement

although the hole is still reachable with two well struck shots. The 11th hole (old

played as a par 4 for The Open. The 12th hole (the old 10th) has been lengthened

just for the elite players with tees to the left of the preceding green. The old 17th

Club on both the Dunluce and Valley Courses since Mackenzie & Ebert was formed.

improvement of the practice ground, the creation of the short game practice area, the

the Dunluce and Valley Courses. Over the past five years, this major project at Royal

the Dunluce Course is as good as it can be for the return of The Open to Royal Portrush.

the feted Royal Dornoch in Scotland, Royal Porthcawl in Wales, Royal County Down in

Northern Ireland and Portmarnock in Ireland amongst a long portfolio of links courses.

Royal Troon, Carnoustie and Royal Liverpool have to present an enjoyable experience

for members and visitors as well as the supreme test of the world’s best players.

heritage of these courses.

to the Dunluce Course which has enabled it to once again host The Open. This has

involved a close working relationship with the Club and The R&A.

Card of the Dunluce Course

148th Open. However, they have also strengthened the character and quality of this renowned links for all golfers. The

in an increase in its popularity. Golf at Portrush should now be an even more enjoyable experience for the members and

visitors as well as providing one of the greatest stages for The Open Championship. 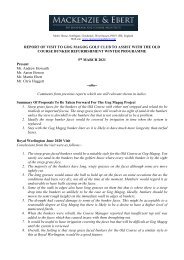 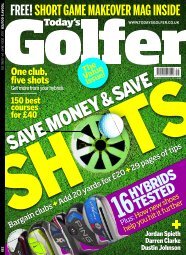 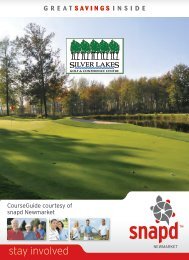 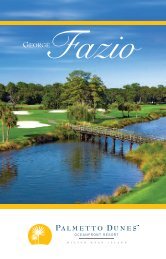