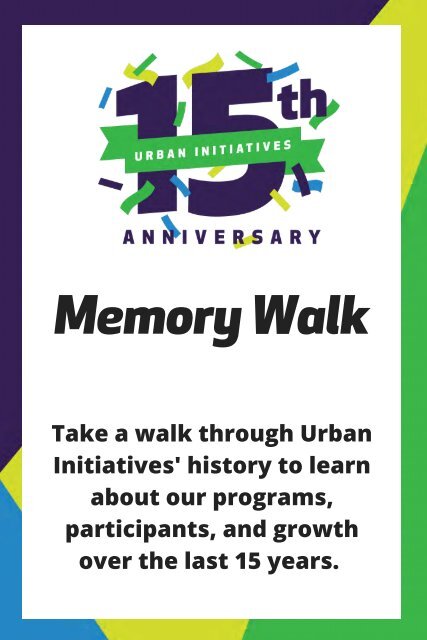 Take a walk through UI's history to learn about our programs, participants, and growth over the last 15 years.

Take a walk through Urban

Urban Initiatives is founded by

At the time of UI's founding, Jim was a substitute teacher at Byrd

Academy in Cabrini Green (the neighborhood you're standing in

right now!). Together they saw a need for extracurricular

activities that would not only allow students to be active outside

of school hours, but that also could act as a community unifier

and a way to motivate students to perform in the classroom.

Fun Fact: Before deciding to have a soccer program, they

Classic with the Wilmette Wings.

Both Jim and Dan coached for the Wilmette Wings, a soccer club

on the Northshore, when they started UI. In order to bring these

two communities together, they arranged a day of soccer, fun,

and friendship that started the tradition of the Wings Crosstown.

Every year, UI buses several Work to Play teams to Wilmette for

health and education soccer program that is the foundation for

our continuum of programming today! Work to Play aims to promote

Urban Initiatives. This annual gala raises money for our

programs and celebrates the stakeholders that make our

programs possible. In its first year, the Soccer Ball raised

trademark event that is always the party of the year!

UI's programs were made possible with the help of

volunteers and part-time coaches for years. In 2007, we

employs over 200 part and full time staff members across

In 2017, Urban Initiatives rolled out our partnership with After School

Matters. This partnership allows UI participants who are now high

Over the years, Urban Initiatives has been invited to participate

in experiences across the city thanks to incredible partners like

the Chicago Cubs. Check out some of the partner sites that UI

has visited over the years!

recess at every school. This

decision was made in

to prioritize exercise, but

many schools didn't have the

resources or staff needed to

run a safe, productive, and

worked to fill this need by

Potential. This structured recess program aims to maximize the

benefits of play time for all students at a school, grades K-8, while

learning during the school day. It impacts every child in a school

community and works to have widespread impact on the culture

and climate of a school. Today, Play with Potential impacts over

influence a school's culture as a whole.

As Urban Initiatives' participants grew older, there became a

need for a program that served graduates of Work to Play. UI

launched Take the Lead- a leadership development and high

school readiness program- in 2013 to serve the students who

were exemplary leaders in Work to Play.

Take the Lead provides students opportunities to serve as Team

The Work to Play Cup is Urban Initiatives' largest programming

event of the school year. It is the capstone event of our

program year that celebrates the dedication and hard work of

were invited for a day that includes small-sided soccer, recess

games and activities, an awards ceremony, and a dance party.

In 2013, we hosted our first ever Work to Play Cup at the

Midway Plaisance and it brought together over 1,000

day of soccer, fun, and friendship has become an annual

highlight for our staff, volunteers, and participants.

The Work to Play program has consistently grown throughout

the years. Check out our growth by the numbers and how

our uniforms have changed in the last fifteen years!

sends their first cohort to

Urban Initiatives seeks not only to impact our participants

through our programming but also to connect our

participants to other experiences and resources to enrich

their learning. In 2014, we sent our first cohort of students to

wilderness expedition that teaches leadership through

uncertainty. NOLS is one of many summer opportunities

afforded to high performing Take the Lead (5-8th grade) and

travel across the country for opportunities like NOLS, the

The Corporate Challenge Cup is the third of UI's banner eventswhich

also include Soccer Ball and Work to Play Cup. The

together all the incredible corporate citizens that support our

students in a co-ed adult soccer tournament. Over 20

corporations compile their teams for a day of friendly

competition, an all day DJ, team building opportunities, and the

champion! Since 2015 this exciting event has raised over

2017- CBRE came back and triumphed again

provider of the Community

enrichment activities and extracurricular programs into

schools. We serve as the lead partner organization for schools

and coordinate the program. This program allows Urban

Initiatives to touch all aspects of a school culture and climate.

We categorize the Community Schools Initiative alongside Play

with Potential in what we call our Culture & Climate

programming because by impacting every student in a school

community we can address the culture of a school as a whole.

In 2016, Urban Initiatives launched the final program in our

continuum of programming. Coach for Success is a college and

participants with mentors from Chicago’s professional

during summer camp, and they have the opportunity to “pay it

forward” by leading and mentoring younger Captains and

Coach for Success wouldn't be possible without the incredible dedication of

the mentors that support our students throughout their high school

journey. These mentors attend monthly meetings with their mentees,

make critical choices about their future.

This year we had several students who progressed all the way

through the continuum of programming graduate from high

school. These graduates are attending colleges and trade

Christian Gordon (bottom right) is a Cubs Scholar and will be

attending Depaul University on a full ride scholarship where he

will study accounting. We are continually impressed with the

accomplishments made by the incredible students in our Coach

Urban Initiatives has grown up from a small health and

education soccer program, into a progressive organization with

diverse programmatic offerings that allow us to engage with

students and families from a young age and build relationships

that last through high school and beyond. This year we are not

only thanking those who have made our work possible, but

also looking towards the future where sport and play will

continue to impact our city by empowering our next generation

its current strategic plan and

at which point we hope to be serving 30,000 students across

Chicago's neighborhoods. This goal can only be met with the

help of our partners, volunteers, and supporters. We are so

excited to continue this work for the next fifteen years and

we are glad you're part of our team.

Memory Walk Take a walk through Urban Initiatives' history to learn about our programs, participants, and growth over the last 15 years.