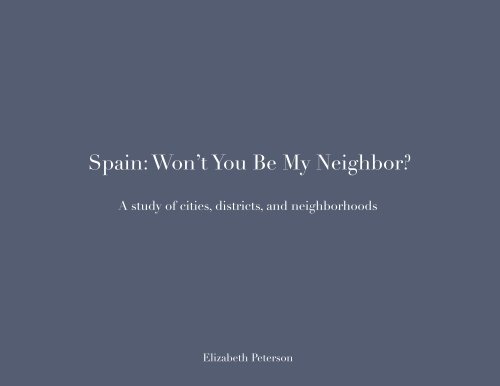 Spain: Won’t You Be My Neighbor?

A study of cities, districts, and neighborhoods

This book is a photographical study focusing on six of Spains most interesting cities:

Barcelona, A Coruña, Madrid, and the small Spanish towns of Granada, Sevilla, and Cordoba.

I chose to focus on the architecture, streets, and people of each neighboring community. I

quickly realized that while the flag of Spain binds each of them together, they also have their

own charm and culture. I hope you enjoy browsing the pages of this book and that it provides

you with a glimpse of what I experienced on my study abroad journey to Spain.

Spain: Won’t You Be My Neighbor? A study of cities, districts, and neighborhoods Elizabeth Peterson