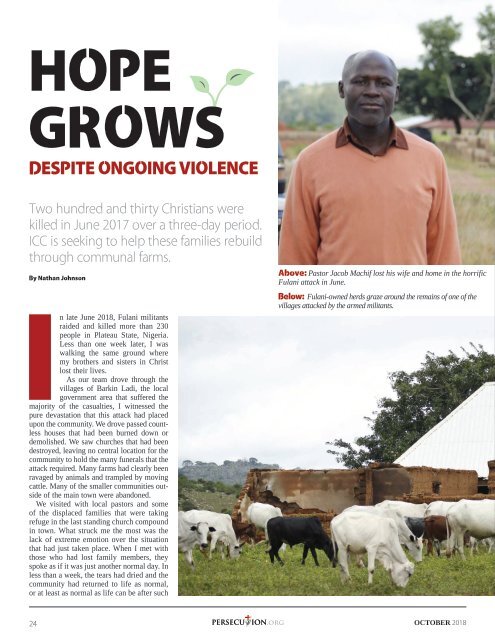 Two hundred and thirty Christians were

killed in June 2017 over a three-day period.

ICC is seeking to help these families rebuild

raided and killed more than 230

Less than one week later, I was

walking the same ground where

my brothers and sisters in Christ

As our team drove through the

villages of Barkin Ladi, the local

government area that suffered the

majority of the casualties, I witnessed the

pure devastation that this attack had placed

upon the community. We drove passed countless

houses that had been burned down or

demolished. We saw churches that had been

destroyed, leaving no central location for the

community to hold the many funerals that the

attack required. Many farms had clearly been

ravaged by animals and trampled by moving

cattle. Many of the smaller communities outside

of the main town were abandoned.

We visited with local pastors and some

of the displaced families that were taking

in town. What struck me the most was the

lack of extreme emotion over the situation

that had just taken place. When I met with

those who had lost family members, they

spoke as if it was just another normal day. In

less than a week, the tears had dried and the

community had returned to life as normal,

or at least as normal as life can be after such

Above: Pastor Jacob Machif lost his wife and home in the horrific

Below: Fulani-owned herds graze around the remains of one of the

villages attacked by the armed militants.