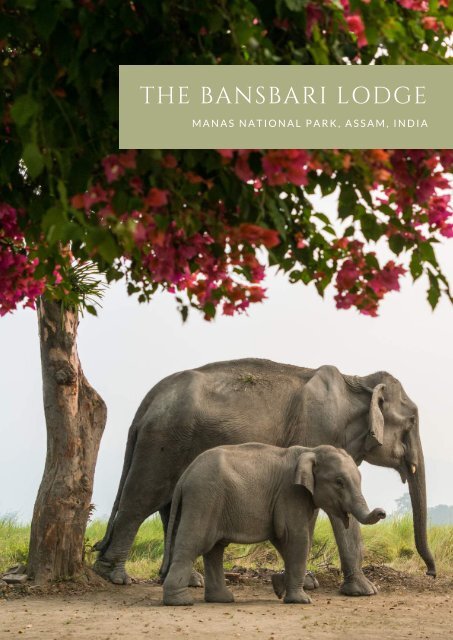 At the UNESCO World Heritage Site of Manas

its own jungle accommodation,

in prime position right at the

of the national park – with tea

on one side, jungle and views of the

foothills on the other – the lodge’s

large twin-bedded rooms are simple but

furnished. There is a welcoming

to the lodge, which includes an

attractive dining room and a lobby where you

can relax on sofas, browsing through books

from our library. In fine weather, tables and

chairs are set outside for breakfast and the

in which to stroll.

Each bedroom has comfortable twin beds, a

writing/dressing table, cane chairs to relax in, and good

hanging cupboard space, while the bathrooms have

excellent hot and cold showers with a basin and W.C.

Our policy at ABN is to provide as much employment as

possible within the area and most of our furniture has

also been beautifully made – to our specification – by

Although simpler in style than ABN’s Brahmaputra river

cruises, our renowned standards of service prevail at The

Bansbari Lodge as well. Our smiling staff includes an

meals, be they of local Assamese cuisine, north Indian,

Manas National Park is situated at the foothills of

the Himalayas and a part of it extends to Bhutan.

It was designated as a Project Tiger Reserve in

then, subsequently, a Biosphere Reserve in 1989

because of its beauty and importance to the

environment. It is indeed breathtakingly beautiful,

situated between the Sankos river in the west

and the Dhansiri river in the east. Bounded by

a great variety of wildlife, including many

Three unique residents of Manas are the rare

Pygmy Hog, the Hispid Hare and the Golden

Langur, and the park is a haven for no less than 20

population of Manas includes some fierce or

potentially aggressive creatures such as Tigers,

Gaur and Himalayan Black Bear, as well as more

timid creatures such as many varieties of deer.

Due to its climatic conditions and

topography, Manas is home to many bird

species, both resident and migratory.

Amongst these are the Bengal Florican,

The walk starts near the Mothanguri Forest

booked in advance through us. Manas spans a

Lodge and initially follows the bank of the

Manas river, where there is the best chance of

huge and varied area and there is much to see.

Currently, we offer 60 or 90 kilometre drives,

route turns from the river to follow an animal

with the longer one being of special interest to

trail through dense jungle foliage underneath

birdwatchers. ABN is continually endeavouring to

open up new routes to combine with these

and even the rare Golden Langur may be seen.

safaris, working in conjunction with the

This walk is accompanied by forest guards and

the overgrown tea estate opposite The

a naturalist. A gentle walk on your own around

Bansbari Lodge in the cool of the evening is

Some of the animals that come out on the banks

herds of elephants, can best be seen from the

of the Manas river, such as wild buffalo, deer and

safety and serenity of a rubber boat which

commences its ride from Mothanguri and ends

At The Bansbari Lodge, we arrange traditional

dance performances of the local Bodo and tea

about 35km away at Bispani, from where you will

be picked up by pre-arranged transport. The

round a camp fire watching age-old stories of

rural life unfold through dance. These

performances are a regular feature for

The Bodo tribe, indigenous to Assam, have a rich

culture of textile, handloom and music. We

organise walks through the villages where you can

The tourist season runs from October through to the end of

April, and The Bansbari Lodge is open throughout this time. The

peak time to visit the park is between November and

Days can be quite warm in

km from Guwahati and

October, March and April with

cooler evenings. During these

Guwahati is the nearest

months, particularly in April, a

few showers are to be

by direct flights from

expected. From December to

the end of February it can be

Kolkata and Delhi and by

quite cold, particularly at night

when the temperature can

railhead is at Barpeta

drop to a single digit and

jackets or pullovers are

are available at Barpeta

needed after sunset. During

the day in these months the

Road and from Guwahati

and we can organize to

temperature hovers around a

pick up from either place 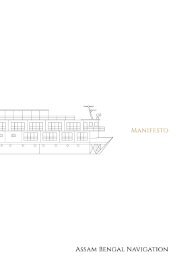 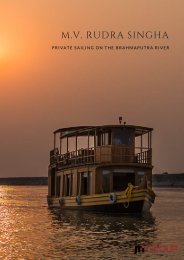 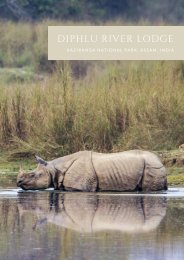