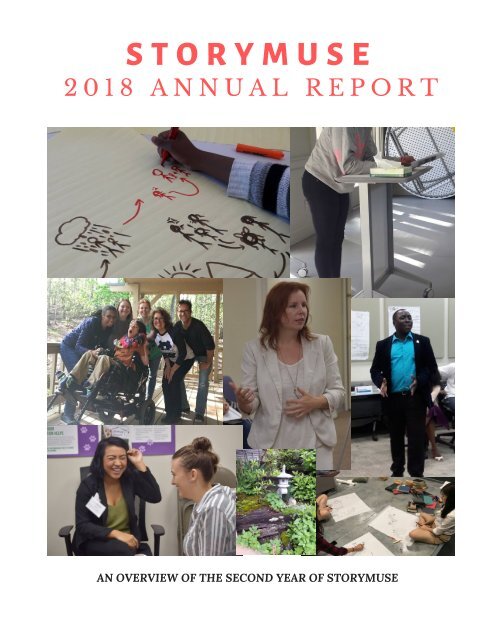 An overview of StoryMuse LLC's second year of projects, partnerships, and activities.

An overview of StoryMuse LLC's second year of projects, partnerships, and activities.

AN OVERVIEW OF THE SECOND YEAR OF STORYMUSE

Two years. It's so hard to

believe it's been two years since

StoryMuse came to be. This one

has certainly been a whirlwind.

I called Year One an

experiment. I didn't want to feel

bad if it didn't work out.

In the proverbial "sophomore

year," StoryMuse grew to a level

I feel so proud of all that was

sustaining contract. I've spent all of 2018

traveling the state of Georgia as part of a

team, collecting 75 stories that represent the

experience of individuals living with a

developmental disability. These stories, in

from each of Georgia’s 56 State Senate

Districts. Story packages are being used for

the Georgia Council on Developmental

project helped me increase my

understanding and appreciation of

intersectionality between race, class, and

disability. There are 9000 Georgians on the

the people who need these resources most

As primary storyteller on the project, I

stories. Along with the GCDD, project

photographers (pictured to the right on our

new version of the Storytelling

Project, a deeper dive with 25

feature audio from these

forward to the opportunity to

explore themes that have

already bubbled up from this

Our Stories, Our Journeys

will be with teenage boys in

treatment foster care. There will

be another round following to

be scheduled. I can't tell you

how pleased I am to be working

with this organization. The staff

there are thoughtful and

You may remember Trigger Warning, the

production back in June 2017. Trigger

and violence. As a result of that project, I

facility. Dr. Graham could see the

therapeutic value embedded in the

of a storytelling show. Thanks to an

internal grant from the Devereux

Foundation, we have worked in

partnership throughout 2018. The pilot

project with girls who have been

May of this year. A second six-week cycle

with the same population came in

Note: Due to the necessarily private and

sensitive nature of the work, I'm afraid I

can't speak specifically about the girls and

their stories. Just know that it has been

"They say you gotta play the hand you're

dealt. But my deck started with one king, one

Despite the enormity of the GCDD and Devereux Storytelling Projects, I was able to

panel discussions, and short-term residencies all over the region:

(*Thanks to your giving through the December 2017 Indiegogo campaign.)

Using Our Stories for Advocacy

As I enter into the third year of StoryMuse, 2019

is shaping up to be a full and fulfilling new

On top of returning to the GCDD Storytelling

Project and Devereux, I already have several

other projects underway or in serious

conversation. Of note, I'll be returning to the

Pending grant funding, I will be working with the

Atlanta Center for Self-Sufficiency to produce a

two-night storytelling show with their homeless

constituents, board, and staff. This project will

There are other irons in the fire, too early to discuss. I hope they work out so that I will

be making pages about them in this publication next year.

The biggest news about the next phase of my career, though, is that I'm currently

Walks with Grief will be a collection of short essays and stories, reflections on my

personal experiences of grief, what I've learned through my work in the world about

the function of grief, and a discussion of how my walking practice has helped me move

Just like I coach people through the process of making a manifesting story, I close my

eyes now and picture holding my first book in my hands in the future. I imagine

sending out the announcement that it's finished and ready for sale. I see myself signing

it, putting it in an envelope, and sending it in the mail to you.

Until then, never forget the proverb:

The shortest distance between two people is a story.