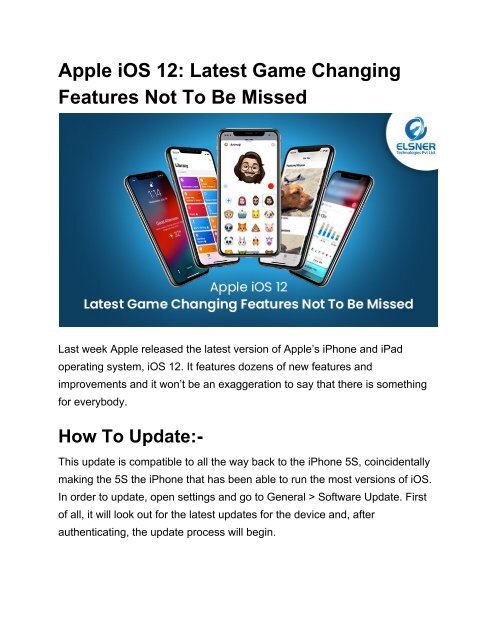 Apple iOS 12 Latest Game Changing Features Not To Be Missed

A bunch of iPhone app development got updated along with some new apps featuring with the latest technology. Look here: https://bit.ly/2EGKZzM

Features Not To Be Missed

operating system, iOS 12. It features dozens of new features and

This update is compatible to all the way back to the iPhone 5S, coincidentally

making the 5S the iPhone that has been able to run the most versions of iOS.

In order to update, open settings and go to General > Software Update. First

of all, it will look out for the latest updates for the device and, after

authenticating, the update process will begin.

It will take some while to update for the device, but when the device finishes

with the gray Apple progress bar, the device will be boot up to the world of

featuring with the latest technology:-

● Voice Memos​:- It got a new interface, as well as iCloud sync, which is

appropriate because it has now become the first class iPad app.

Majority of iPhone users use voice memos as it is a user-friendly app.

● iBooks​:- It got a makeover, reminiscent of the App store remake that

Apple unveiled recently. Even the name got an update and it is now

Apple Books. The reading experience is optimized in different ways

depending on the device that the user is using. Audiobooks get their

own section, and a couple of new options in the settings app allow them

to determine what information syncs between their devices.

● Apple Music​:- It can now search for songs using lyrics. That is a subtle

but pretty cool update right there. There is also a change on the Radio

tab that replaces ‘Recent Stations’ with featured Radio Stations. The

and the millions of songs to make them more engaging user experience.

● Dictionary​:- The Dictionary now includes a thesaurus, as well as a mew

Hebrew dictionary and bilingual dictionaries for Arabic and Hindi. There

were many suggestions which were passed on related to the

multi-language dictionary and the company accepted those feedbacks

and added other languages too.

throughout login screens and apps. When the user taps the ‘Strong

adds it to their iOS keychain.

● Siri And Shortcuts:-​Siri gets a new app called Shortcuts, although

rather than arriving with iOS 12, a user needs to download it from the

App Store in order to get it. Once installed, open Siri shortcuts app and

tap on Gallery to see a gallery of ready-made shortcuts, such as

many notifications a user receives. From the lock screen itself, Apple

refers to this as ‘instant tuning’. When the user press into a notification

source entirely, or simply tune the circumstances under which it notifies

● Wrap Up: –​No other ​Mobile App Development​ company brings out

this level of perfection in the software upgradation like the Apple. Apple

will, of course, have long-term plans in place, as the iOS team will not

For any queries !! Just fill up the ​contact form​ and our experts will get back to 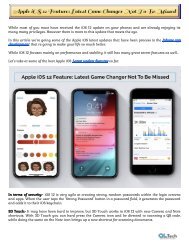 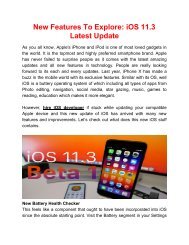