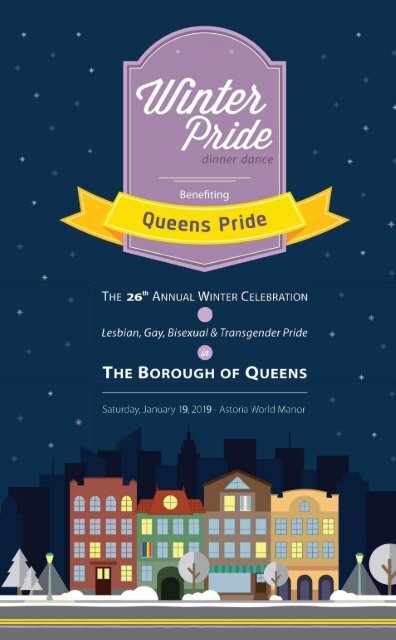 Welcome to Winter Pride 2019! The funds raised this evening support the

Queens Pride Parade & Festival in June. Without your support, we could

not hold these events.

success, we take pleasure and pride this year in honoring three amazing

Advocate and Melissa Sklarz - Political Advocate. We are so proud to

that uplifts the LGBT+ community.

Finally, we want to say thank you again, all of you... our members,

business manager, volunteers, sponsors, supporters and Board of

Thank you again for being with us tonight and see you all on Sunday,

June 2nd for the 27th Queens Pride Parade and Festival...Enjoy!

Queens Pride was established to

about the gay, lesbian, bisexual,

education among and of the gay,

community and shall support efforts

by organizations and individuals that

for and of gay, lesbian, bisexual,

QLG PC shall organize a

In addition to our core mission to

organize and host the annual

County in June of each year.

festival, our group works to foster

awareness and education within

programming and to engage our

elected officials on issues pertinent to

Scarborough, Trinidad and Tobago. Although

Jackson grew up with her grandmother, she still

experienced a traumatic upbringing that included

bullying and sexual abuse. She fled to the United

States at the age of eighteen due to not being

accepted as transgender by her family.

During her time in the United States, Jackson has

and living off credit cards for survival. It was in

1993, while living in Baltimore, Maryland, that

Jackson was introduced to the ballroom scene. She

then lived in various "houses" and eventually settled

in the House of Sinclair which was stationed in New

Overcoming memories of a dark childhood, Dominique self-published the hurdles,

hurts, revelations and triumphs of her journey in an autobiography titled “The

Transsexual from Tobago.” Dominique is a LGBT and human rights activist who

wants to encourage those who need hope and inspiration.

Jackson has been open about her mental health struggles. After a thirteen-year writing

process, she released her autobiography The Transsexual from Tobago. She has also

worked for several nonprofit organizations (such as Destination Tomorrow in the

Bronx) that provide outreach and services to the LGBTQ community.

In 2018, Jackson began appearing in the leading role of Elektra Abundance on the FX

series Pose, which is based on the ballroom subculture in New York City of the late

1980s. The first season boasted the largest cast of transgender actors ever for a scripted

announced that the series had been renewed for a second season, which is set to

Angeles for an exciting opportunity. With vast experience in the industry, Dominique

serves as a mentor to the models at Slay.

In 1999, Melissa became the first transgender

person elected to office in New York when she was

elected a Judicial Delegate from the 66th Assembly

District. In 2004, Melissa became the first

transgender person from New York to be part of the

state delegation at the Democratic National

Convention, by being appointed to the Credentials

Committee and again on the Rules Committee in

elected to be a delegate to the Democratic National

first trans American to be selected for the Electoral

law in 2002, served on the Working Group with the New York Human Rights Commission

to flesh out the law, and has been a lobbying leader for GENDA (Gender Expression Non

Discrimination Act) since the bill was developed in 2002. Melissa was a leader of trans

expansive birth certificate at the local and state level for the last 10 years.

In 2008, Melissa was a co-chair for Obama Pride NYC, helping to organize the LGBT

White House in June 2009 to celebrate the Stonewall Rebellion.

In 2010, Melissa was at the side of Governor Paterson when he announced an executive

New Yorkers in 2015. Currently, Melissa is a member of the Failla Unified Court

Commission, to ensure the New York Court system is fair for all LGBT New Yorkers.

Melissa was the first member appointed.

Melissa moved to Queens in 2005 and has been active in Queens politics, and serving on

the executive board of Northern Regular Democrats in North Woodside. She is also a

Melissa had a featured role in the film Transamerica.

LaLa is an dedicated and passionate advocate, and

who speaks out on issues related to anti-LGBTQ

violence, and especially the disproportionate

people of color face as a tool for her personal

LaLa was a member of the National Coalition of

Building Committee. Professionally LaLa is the

outreach, and networking on behalf of LGBTQ New Yorkers who have experienced

testified at the first historic Congressional Forum on violence against transgender people.

searched by the NYPD. Was a member of the Trans Women of Color Collective (TWOCC)

of Color better. Recently LaLa has partnered up with two of her chosen sisters to become

all of our collective power in.

THANK YOU TO OUR

THANK YOU TO OUR

is proud to support Queens Pride

Congratulations to the Winter Pride 2019 honorees

and all of this year’s

Men Who Brunch is an lifestyle

brunches and other social events.

The purpose of these events is to

persons to network and bond. 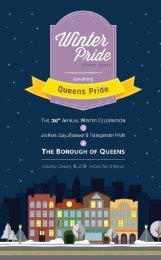 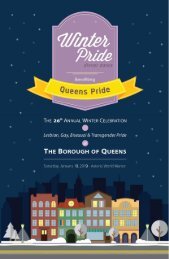