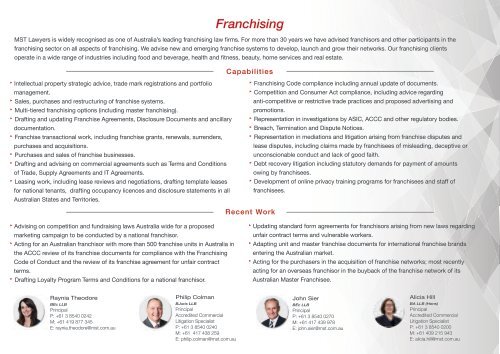 MST Lawyers is a progressive law firm comprising some 60 dedicated Lawyers and support staff. MST has grown from a small firm originally founded in the 1950s, into a dynamic mid-tier commercial and private client legal practice.

Our clients include individuals, entrepreneurs and businesses, small to medium sized enterprises, national and international corporations, including publicly listed corporations, national retail groups and national franchise groups, many of whom are household names throughout Australia and the world.

MST Lawyers is divided into teams, each headed by a Principal experienced in a specific discipline of legal practice. The teams are as follows:

MST Lawyers’ experienced, friendly and dedicated team of lawyers prides itself on delivering great service and sensible solutions to our clients every day.

MST Lawyers is widely recognised as one of Australia’s leading franchising law firms. For more than 30 years we have advised franchisors and other participants in the

franchising sector on all aspects of franchising. We advise new and emerging franchise systems to develop, launch and grow their networks. Our franchising clients

operate in a wide range of industries including food and beverage, health and fitness, beauty, home services and real estate.

‣ Drafting and advising on commercial agreements such as Terms and Conditions

for national tenants, drafting occupancy licences and disclosure statements in all

‣ Competition and Consumer Act compliance, including advice regarding

anti-competitive or restrictive trade practices and proposed advertising and

‣ Representation in investigations by ASIC, ACCC and other regulatory bodies.

‣ Representation in mediations and litigation arising from franchise disputes and

lease disputes, including claims made by franchisees of misleading, deceptive or

‣ Development of online privacy training programs for franchisees and staff of

‣ Advising on competition and fundraising laws Australia wide for a proposed

marketing campaign to be conducted by a national franchisor.

‣ Acting for the purchasers in the acquisition of franchise networks; most recently

Insolvency And Restructuring Our team provides advice to insolvency practitioners and major creditors. We advise clients and deliver practical, commercial solutions when faced with corporate administrations, liquidations and receiverships. Our experienced lawyers can assist with business recovery, reconstruction and restructuring strategies. Capabilities Advising and acting for: ‣ Liquidators and bankruptcy trustees seeking to recover voidable transactions in the Federal Court of Australia and State Courts; carry out their statutory obligations and wind up companies or bankrupt estates. ‣ Secured Creditors seeking to confirm priority or enforce PPSR interests/mortgages and charges affecting real and personal property. ‣ Administrators conducting trade-ons under the voluntary administration regime with a view to sale of the business. ‣ Receivers seeking to realise and recover for secured creditors debts owed by the company subject of the security. ‣ Unsecured creditors in responding to queries, demands or claims by external administrators or the entrance into new supply or ongoing supply arrangements. ‣ Directors defending recovery claims made by liquidators of insolvent companies and bankruptcy trustees for unfair director related transactions, insolvent trading, unfair preferences and other voidable transactions. ‣ Various parties to: » Obtain injunctions and restraining orders including freezing orders and search orders. » Enforce local and foreign judgments and advise on cross-border proceedings. » Advise on the turnaround and restructure of financially troubled businesses in conjunction with directors, turnaround specialists, financiers and other advisers. Recent Work ‣ Acting for a secured creditor proposing to a liquidator of NQR Pty Ltd to facilitate the entrance into a Deed of Company Arrangement to pay out all employee entitlements, pay a dividend to unsecured creditors greater than if the company was liquidated and secure the return of the company to the directors. ‣ Acting for Gess Rambaldi and Andrew Yeo as Bankruptcy Trustees to seek recovery of voidable transactions for the bankrupt estate of Ronnie Bensimon. ‣ Acting as trustee in bankruptcy to defend David Clout, in the Federal Court of Australia from claims of inappropriate conduct of an administration made by a secured creditor seeking to set aside a compromise of the bankruptcy. ‣ Acting for Karen Kelson and Craig Bolwell as liquidators to recover preferential payments for the ATO in respect of corporate trustees of trading trusts. Philip Colman BJuris LLB Principal Accredited Commercial Litigation Specialist P: +61 3 8540 0240 M: +61 417 438 259 E: philip.colman@mst.com.au Mark Skermer LLB (Hons) Principal P: +61 3 8540 0262 M: +61 448 901 681 E: mark.skermer@mst.com.au Alicia Hill BA LLB (Hons) Principal Accredited Commercial Litigation Specialist P: +61 3 8540 0200 M: +61 409 215 943 E: alicia.hill@mst.com.au