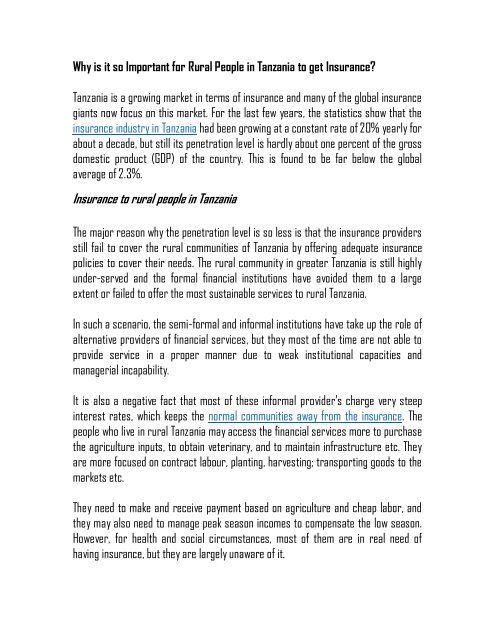 The major reason why the penetration level is so less is that the insurance providers still fail to cover the rural communities of Tanzania by offering adequate insurance policies to cover their needs.

Why is it so Important for Rural People in Tanzania to get Insurance?

giants now focus on this market. For the last few years, the statistics show that the

about a decade, but still its penetration level is hardly about one percent of the gross

domestic product (GDP) of the country. This is found to be far below the global

Insurance to rural people in Tanzania

policies to cover their needs. The rural community in greater Tanzania is still highly

extent or failed to offer the most sustainable services to rural Tanzania.

In such a scenario, the semi-formal and informal institutions have take up the role of

alternative providers of financial services, but they most of the time are not able to

interest rates, which keeps the normal communities away from the insurance. The

the agriculture inputs, to obtain veterinary, and to maintain infrastructure etc. They

are more focused on contract labour, planting, harvesting; transporting goods to the

They need to make and receive payment based on agriculture and cheap labor, and

they may also need to manage peak season incomes to compensate the low season.

However, for health and social circumstances, most of them are in real need of

having insurance, but they are largely unaware of it.

When it comes to the rural Tanzania, most of those who live there are not even aware

of the concept of insurance and the benefits coming packed with it. So the approach

insurance will help them live a more secured and healthy life.

access to any sort of financial services, and this percentage is higher in the rural

Tanzania. There are many microfinance institutions (MFIs) have enhanced their rural

operations lately, but still they were not able to penetrate more than 5% of the rural

down their opportunities for employment. So, insuring their corps from natural

hazards will be one of their primary priorities. Considering the scenario of social

insecurity, people of rural Tanzania may be interested in getting insured for their life

and also against accidents and theft etc. 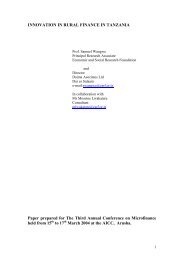