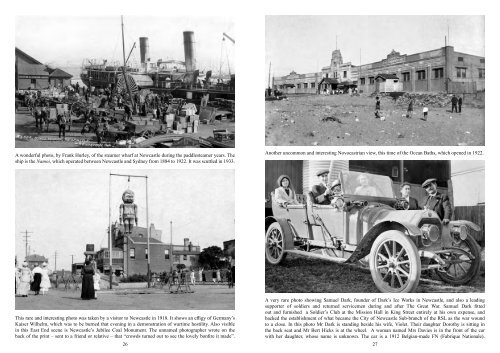 Travelling Through Time by sea, road and rail in Newcastle and the Hunter

A wonderful photo, by Frank Hurley, of the steamer wharf at Newcastle during the paddlesteamer years. The

Another uncommon and interesting Novocastrian view, this time of the Ocean Baths, which opened in 1922.

This rare and interesting photo was taken by a visitor to Newcastle in 1918. It shows an effigy of Germany’s

Kaiser Wilhelm, which was to be burned that evening in a demonstration of wartime hostility. Also visible

in this East End scene is Newcastle’s Jubilee Coal Monument. The unnamed photographer wrote on the

back of the print – sent to a friend or relative – that “crowds turned out to see the lovely bonfire it made”.

supporter of soldiers and returned servicemen during and after The Great War. Samuel Dark fitted

out and furnished a Soldier’s Club at the Mission Hall in King Street entirely at his own expense, and

to a close. In this photo Mr Dark is standing beside his wife, Violet. Their daughter Dorothy is sitting in

the back seat and Mr Bert Hicks is at the wheel. A woman named Mrs Davies is in the front of the car

with her daughter, whose name is unknown. The car is a 1912 Belgian-made FN (Fabrique Nationale). 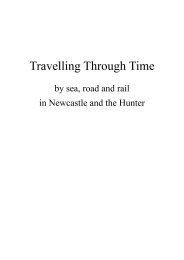 Magazine: Travelling Through Time by sea, road and rail in Newcastle and the Hunter