For one week in February 2019 I had an art residency at Brison’s Veor, a solidly built house

as far west in Cornwall as is possible (well, maybe Lands End...). It is a dear house, unspoilt

and practical with two studios, and a view out of the window so exciting that I would defy

anybody to get used to it. I spent hours and hours gawping out at the waves rolling in, trying

to catch the copper green colour in my memory as the water folded over again and again. We

clambered all over the little peninsula of the Cape and beyond to West Penwith. I wanted to

absorb as much of the place as I could, and I am aware that I have only scratched the surface. I

was there for a week, but came away with enough ideas for a year!

Cape Cornwall is not actually the furthest

west point of this island, but they thought it

was when they named it, so the name stuck.

Known as ‘General de Gaulle in his bath’

This became an obsession. The Brisons rocks look so much like

General de Gaulle lying down with a big tummy sticking up,

that every time I glanced over at him, I expected him to get up

and wander over looking for a bath towell.

I did a few watercolours. I wished I had brought some oils

with me, the rocks are too meaty for subtle washes. I had been

collecting stones, so I had a go at making some pictures with

them. I even made an animation with them, but I couldn’t get

the camera in the right mode, and it jumped about too much

because I hadn’t secured it to anything.

the animation, then I would have Mary to help me. She knows

all about the complicated camera and how to animate. I got

Gaulle getting up and wandering over to look in the window.

The history of mining for tin and copper goes

back over 3000 years in this part of Cornwall,

with traders from the Mediterranean during

or the ‘Tin Islands’. In fact this area was the

centre of the world for copper mining a

couple of hundred years ago.

These chimneys are dotted around the

landscape in what seems to be romantic

abandon. There is one almost wherever you

look. However, I expect the romance wasn’t

so great a hundred years ago, and the fumes

from the arsenic burners must have been

something. Each chimney is built with a

different design of granite and brickwork,

large granite blocks at the base topped off

fishermen’s jumpers. Some of these are

ventilation chimneys, some are chimneys to

vent steam and smoke from the engine houses

which were pumping water out of the shafts,

and some are smelting chimneys where they

burned the copper to get rid of the arsenic.

You can’t always tell which is which.

Here are some from around West Penwith.

Geevor is the most wonderful example of perseverance

and preservation set in the horror of Tory eighties’ mine

closures. The mine operation couldn’t be saved, but

thankfully it has been re-purposed to show us what we

have lost. And the importance of Geevor is massive! I

honestly think it’s the best museum I’ve ever been in. I

could (and did) spend days there.

What a massive operation it was, and how proud the men

who worked the ore out of the ground and processed it.

They were brilliant. The most emotional place is ‘the dry’,

where miners’ clothes are hung out on the hot pipes, and as

starting up. It was spooky!

I loved the rock museum, I found out about Cassiterite

and Botallackite. But I didn’t find out enough! Why is

Cassiterite, or tin oxide (SnO2) black, but can also be a

white powder? Something to do with organic or inorganic?

I tested some of the black Cassiterite from Geevor in a

glaze and got an unimpressive black sludge. Compared

with the whitening opaqueness that my regular pot of

SnO2 produces, I didn’t feel too happy. I want more

information! I learned so much, and had to revisit to fill

in some gaps. I actually need to go back again, it feels

Saveall’s Lode. Killas to the left (slate) and granite to the right. The seam consists of quartz, tourmaline,

hematite (iron - that gives the red stain) and cassiterite (tin).

with veins of tourmaline and quartz.

Copper and tin is found in these veins, seams,

or lodes between killas and granite. Seams

run at a near vertical angle, and are up to 3ft

wide. At Priest’s Cove there is a seam that has

been mined called Saveall’s Lode. It has a rusty

locked gate beyond which there is a cold dark

I wanted to do something that showed the

killas and the smoothness and purity of tin.

I tore and squished some rough black clay

and pushed and swivelled a smooth round

pebble of killas into it to form small bowls. I

fired them and glazed the inside of the bowl,

then fired with lustres (copper and platinum).

I noticed that the angle of the quartz lodes

was always just off the vertical and I wanted

to get something of that into my work, so I

made some rough black pots with copper and

tin lustre lines up the outside and a glowing

copper or tin interior. I threw some Vulcan

black clay vessels, glazed them and then added

silver leaf to the outside. Leaf was fun to apply,

and I could put it onto parts of the pot that

hadn’t been glazed. I was a bit disappointed

that the clay fired to a dark brown and not a

Quartz seam formed in cracks in the killas.

Stoneware vase with an off-the-vertical seam.

Then of course on the rocks are all these lichens.

Lichens are actually a symbiotic relationship

between fungi and algae. Maybe a bit like the happy

strengthening marriage between copper and tin to

(fructicose, I think this may be ‘oak moss’), leafy

green and orange. The colours are quite exciting, and

To get something resembling lichen for my purposes

I needed a dark background, ie black clay, with

splodges of white, tan, green and orange. I thought

it would be a simple task, but soon realised that the

glazes I was using weren’t always coming out opaque,

and were possibly reacting unpredictably to the black

clay. the green one was firing to transparent red! Also

wasn’t sure what temperature had been reached. Then

I realised I would be better off splodging with slip.

I will get there in the end. What a time consuming

I had this idea to take some impressions

in stoneware clay from the rocks around

Priest’s Cove. In fact the rocks were

incredibly interesting and beautiful the

more I looked at them with cracks running

in all directions and the flat pancakes of

lichen. The clay impressions I took were

spoiled a bit by having been squashed

against some canvas beforehand, but I

managed to get a few good ones.

I bisque fired these tiles and then took

some impressions from them to get

positive relief tiles. I made the tiles square

and smaller, and lost quite a lot of detail,

especially when I glazed them.

The next time I made the tiles the same size

and shape as the originals, and out of black

clay. I also wanted to get the feel of the

original colours on the rock when I came

to use the glaze. I’m still working on this!

into first tile. With various glazes (‘South Pacific’ and

At Priest’s Cove showing killas with granite boulders in forground.

As well as taking impressions from rocks, I couldn’t resist sampling a few plants from the area. The first

impressions were pretty sharp, but the second tiles came out quite muted and muffled looking. The glaze

colour wasn’t what I wanted either. I wanted the copper/bronze/wave green. I joined the square rock and

plant tiles with some wire that ties bags of clay at the top, and made a hanging, which looks ok.

LOOKING OUT THE WINDOW

It was a fabulous view south towards Carn Gloose and

Land’s End! I did a bit of sketching and painting onto leather

hard clay. I moulded them into plates and glazed them

adventurously. They all went a bit wonky.

I had so much trouble finding this green. It was everywhere

at Cape Cornwall, but nowhere in my pottery. I had gone up

40ºc to stoneware temperature, and could get a nice blue, but

the green eluded me. I bought loads of glazes to try: ‘Seaweed’,

Turquoise Mottled’... I added copper to a green grey glaze,

which turned it black, tore my hair out a bit. All the glazes

failed: they were grey, orange, black... My old earthenware

lead glaze had produced a lovely green by adding chrome and

cobalt oxides, but I could not get it at this higher temperature.

I bought some more glazes. One called ‘Copper Patina’ looked

It’s not over, the quest goes on. I find something, and I lose it. I

do something spectacular, and next time it goes wrong. I have

the greatest idea, and it comes out differently. Some call it Wabi

Sabi, but when you think about it, it’s just life! 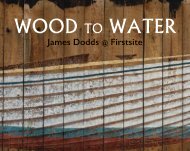