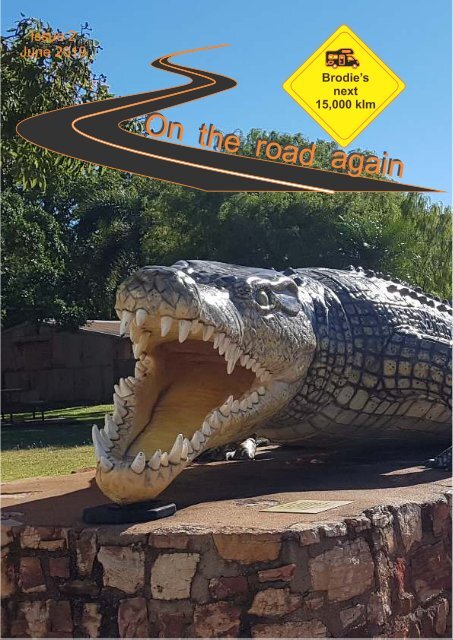 another couple of weeks of travel

Normanton was our choice as I wanted to ride the Gulflander, probably Qld’s oldest trains.

The caravan park was only $16 for an unpowered site but the amenities were fairly rustic,

with the male showers having as much privacy as a football changing room. The town being

shops to cater to the residents.

loose underneath, I approached the local BP mechanical workshop and he agreed to check it

after lunch. When it was on the hoist I checked underneath and he checked the oil levels and we

couldn’t find a problem, I asked how much and he said I only charge when I fix something and I

hoist and still he wouldn’t accept anything!

A few of the pubs in town

pre Ww11, being cheap to build and repair.

After being lovingly restored it is occasionally brought for public trips.We were

had nicely upholstered seats it was a pretty bumpy and slow trip, but still very

The view from the drivers perspective

The Gulflander runs between Normanton and Croydon, it was

established in the late 1800's when Croydon was a major gold

town. After the gold ran out the trains still ran but with reduced

Tourist demand led to 2 hour excursions from Normanton once

or twice a week and we did one of those. It was enjoyable but

the 2 hours were long enough, I’m my attention span wouldn’t

have lasted the 5 hour full trip

Karumba is basically a hotspot fishing destination with people from

passion. Karumba was also a port for the live cattle trade to Indonesia

(not sure if that still happens)

enjoying a huge Barramundi fish and chips, taking in the vista of the

Gulf we headed back to Normanton

place, but to us it was a typical seaside fishing village that is quite

common on the Australain coast.

The Mary Kathleen Uranium Mine

their power stations, once the contract was fulfilled the mine closed till the mid 70's when

it was used to supply Japan among others for their power stations. At the end of those

contracts the mine was decommissioned and virtually everything was sold and removed.

concrete slabs are all that remain of this once thriving mining town. The area is all private

property but the owners allow it to be used as free camping ground.

Although you cant see it in the drone photo, as it was taken in the late morning, there

were probably over 100 vans staying overnight.

you needed a 4wd (or not care about your own vehicle.) to get to it.

The blue water sends gieger counters crazy, but people still swim in it,

there the ones that glow at night.

We arrived in Camooweal after a brief stop in Mt Isa, well they did have a McDonalds.. so

hotcakes for breakfast and on we went.

Camooweal really caters to the travelling public with free water, dump point and a huge area along

the riverbank, although in the dry a series of billabongs, which stretches for kilometres.

Wikicamp, our free camp bible, suggested to avoid the first section of the free camp as it gets too

crowded and move further down river, when we pulled into the first section there was no one there

so we set up camp. I flew the drone over the second section and it chocca’s with vans. There was

that is after a constant stream of vans headed past us heading for the 2nd section ..... no idea how

many ended up there or why they had to all cluster together.

That’s us, in the first section

and no one near us,

but look at the big picture

Well it happened to us, when we arrived we were the only ones there, then the two motorhomes

and caravan parked barely 10 metres from us, just after the photo was taken another two parked

right next to us on the other side ... look at the photo there is heaps of room, why park next to us?

Now .. whats the problem you say??? ... well Jan’s got an over developed sense of intruding on

others, so we had to have the tv so low I couldn’t hear it and talk in whispers so we didn’t disturb

them!! while they ran their generators, shouted between vans and generally carried on as if no

one else was around.

Banka Banka was our first stop on the Sturt Hwy, heading towards Darwin,

we had shopped earlier at Tennant Creek, it having the only supermarket

within 300 ks, as Banka Banka carried no supplies.

The photo was taken around 11am, by late afternoon there was barely a

clear patch of dirt and they were still coming in ... so many people

That night they had a country and western singer and a campfire ...it was

27 degrees!!, neither was to our taste so it was an early night and an early

departure. Well we thought we were early, but by 7am the campsite had

cleared...everyone racing for the next spot.

Daly Waters Pub is one of the icons of the Northern Territory, every traveller has to call there ... there is only

a pub!! in fact in the last census Daly Waters permanent residents totalled 9. Most days in the season there

would be hundreds of people there.

Remember I said people left sites early to get a spot at the next one, well we arrived there at about 10.30

and it was almost full, we would have been earlier but we stopped at Dunmarra to try their iconic vanilla

slices .. they were huge and great.

customers .. some of them do it reall well.

The star meal “barra and steak” is so popular that you have to book and they have several sitting times,

for two serves of fish and chips.

I think the pub owns every business in town ...they probably own the town.

There is some form of entertainment every night, we were fortunate enough to have

both the Pitt Family Circus and a country and western duo. We had seen the Pitt

Family preforming in Lismore a few years ago, since then they had added another

member (2 years old) and the show was a bit more risque .obviously to suit the older

After the circus show we, not being ones to hang around pubs, went back to the

motorhome to cook tea with the country music wafting in the background.

Mataranka, like a lot of this area, has hot springs bubbling to the

surface and with enough quantity to form creeks of hot water, 32

degrees, that flow into the normal rivers.

Bitter Springs is one of them, the NT Parks have built paths and

and hop out and the steps and do it all again.

There is a slight chance of crocodiles, mainly “freshies” but this

quite low.... they put foam balls in various places and check for

teeth marks as the crocs are quite curious, I found some with teeth

marks but they were probably old ones.

Katherine is the highway compass hub of the NT. north to Darwin, south to

Adelaide, east to Townsville and west to Broome.

We didn’t do a lot here as we will be staying here again after Darwin, we

stayed in the cheapest unpowered park, at $20 a night it wasn’t all that bad.

The motorhome needed it’s tyres rotated, we found a McDonalds and

Buying the beer was an experience, there were two NT police officers

to have your id scanned prior to paying for anything..must be an alcohol in

Cahills Crossing was going to be the highlight of Kakadu,

evidently at high tide the Barramundi fish swim across the

crossing much to the delight of the waiting crocodiles. We

50 metres upstream, sunning itself on the bank. As we

fishes caught, but no more crocodiles.

Our attention span ran out about 30 mins before hightide

about an hour looking at the scenery.

This was the sight that greeted us when we returned an hour later. I

a few bystaneeders they said none had appeared.

caravan park who said they had seen them feeding.

Speaking of the caravan park, we thought it and Kakadu were

extremely over priced. A Magnum ice cream around $3.50 most

Walking down towards the Ubirr location, for us

have been the most impressive site ion the Kak

The first rock art we came across, we were following a

guided party and they were told this was over 2000

people stealing ..all about a rock being rolled in front of

a cave and trapping the thieves ..I must have missed

She also pointed out the white figure saying he was a

I think there was some confusion as my knowledge of

history doesn’t have white man in this area till around

We climbed to the top of rock

and this was the view ... well

you will have to turn the page!

Some of our other blogs