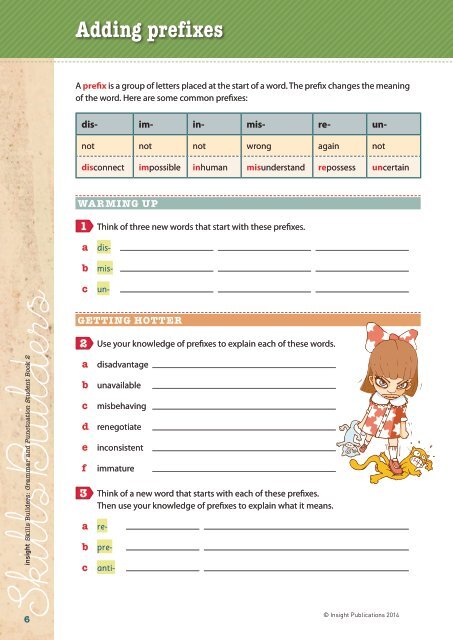 A prefix is a group of letters placed at the start of a word. The prefix changes the meaning

of the word. Here are some common prefixes:

not not wrong again not

1 Think of three new words that start with these prefixes.

2 Use your knowledge of prefixes to explain each of these words.

3 Think of a new word that starts with each of these prefixes.

Then use your knowledge of prefixes to explain what it means.

The main modal verbs are:

will, would, can, could, may, might, shall, should, must and ought to.

Modal verbs are important for expressing degrees of certainty.

■ I might go to the movies later on with my friends.

■ You can learn how to do that today.

■ We shouldn’t run in the corridors at school.

1 Choose a correct modal verb to complete each sentence.

a If you do not wear a coat, you

you please close the window for me?

we go to the cinema or stay in tonight?

2 Add a modal verb to complete each sentence.

a This evening, I

stay in and do my homework.

give Sandeep a present at his party tomorrow.

be bigger ramps at the skate park.

d At today’s assembly, we

all sing the school song.

Here is a summary of the phrases and clauses you are likely to have met so far.

A group of words that may have

nouns or verbs but does not have

a subject doing a verb.

A group of words that has a

Main clause A complete sentence by itself. ➜➜Ben went swimming

Starts with a conjunction and does

not make sense by itself.

Adds extra information to the

sentence by modifying or defining

You might recall that a subject is the person or thing

performing the action in a clause or sentence.

Underline the subordinate clauses in these sentences.

a After Romi sneezed on the cake, she threw it in the bin.

➜➜The car that is parked next

door is shiny and red.

b Unless Thomas finishes his homework, he will have detention tomorrow.

c The dog chewed on the slipper while Dad slept in his chair.

d Although I was scared, I opened the old wooden door and peeked inside.

e We will win the match if we play our best.

Juan put up his hood because it was raining.

g As she had some free time, Rose thought that she might bake a cake.

Direct speech, sometimes referred to as dialogue, is the exact words used by the

speaker. You need to put quotation marks (also known as speech marks) around what

‘I can’t believe I’m in Year 8,’ said Gabrielle to Chloe.

Tick the sentence that is punctuated correctly.

2 Rewrite these sentences as direct speech. Make sure to use the correct punctuation.

a She told Aisha to go and get her book bag. Aisha refused.

b He told Mum that he had spent all of his pocket money. Mum was annoyed.

c Sebastián told Ellie that he had borrowed her pen. Ellie said that he could keep it.

d Nicholas told Dao that he would play footy with him on the weekend. Dao was pleased.

Apostrophes for possession and contraction

Apostrophes can be used to indicate possession or to show contraction.

➜ Possession: An apostrophe can be used to show who or what

something belongs to. For example: ‘the boy’s ball’.

➜ Contraction: Sometimes we shorten words, and in such cases we use an

apostrophe to show where letters have been left out. For example: the

apostrophe in ‘don’t’ indicates the missing letter in ‘do not’.

1 Write the contraction for the underlined words.

a I would go to the party but I am sick.

b Let us see what time the shop closes.

c I do not think I will have enough money.

d I have nearly finished the book I am reading.

2 In these sentences, insert the apostrophe in a

correct place to show possession. Then on the line

below, explain what the apostrophe indicates.

All of the woman’s clothes were hung up neatly.

One woman owns more than one piece of clothing.

a All of the girls coats had fallen onto the floor.

b The boys bike was resting against the apple tree.

c You could see two eggs in the birds nest.

d The childrens lunch boxes were stacked up near the door.

You can change many verbs to nouns by changing the word ending. Some common

Change the following verbs to nouns. There may be more than one possible

answer in some cases.

Fill in the noun form of the verb given in brackets in the letter.

followed by an awards b

forward to your e

(assemble) will be held on Friday,

(conclude) of the evening, there will be

(perform) by students. We look 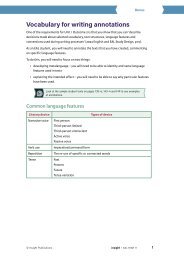 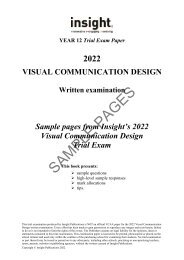 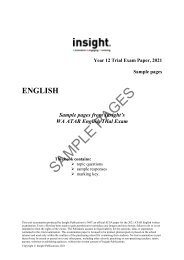 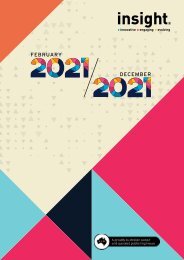 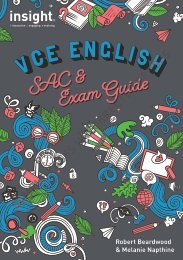 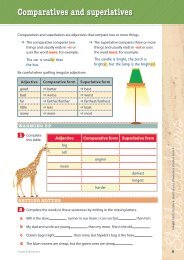 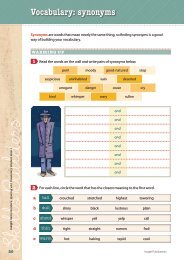 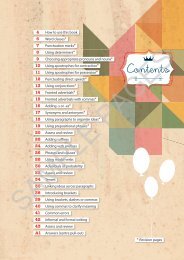 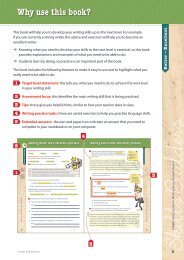 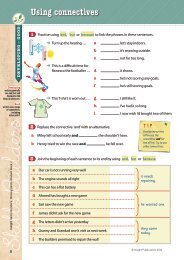 Adding prefixes A prefix is a group of letters placed at the start of a word. The prefix changes the meaning of the word. Here are some common prefixes: dis- im- in- mis- re- unnot not not wrong again not disconnect impossible inhuman misunderstand repossess uncertain WARMING UP 1 Think of three new words that start with these prefixes. a disb mis- <strong>Builders</strong> insight <strong>Skills</strong> <strong>Builders</strong>: <strong>Grammar</strong> and <strong>Punctuation</strong> Student <strong>Book</strong> 2 6 c un- getting hotter 2 Use your knowledge of prefixes to explain each of these words. a disadvantage b unavailable c misbehaving d renegotiate e inconsistent f immature 3 Think of a new word that starts with each of these prefixes. Then use your knowledge of prefixes to explain what it means. a re- b pre- c anti- © <strong>Insight</strong> Publications 2014 <strong>Skills</strong><strong>Builders</strong>_SB2_<strong>Grammar</strong><strong>Punctuation</strong>_5pp.indd 6 10/03/14 7:05 PM