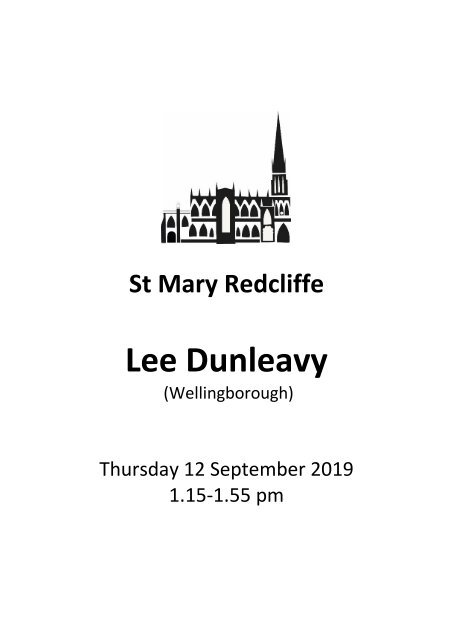 Lee Dunleavy is a dynamic conductor, organ recitalist and composer. He grew

up in Harrogate and held the Organ Scholarship at St Peter’s Church, under

Director of Music Philip Wilby. He then read Music at Hertford College in the

University of Oxford, as Organ Scholar and later Director of Chapel Music.

After working as Director of Music at Christ Church, Southgate, London, he

was awarded the Organ Scholarship at York Minster. He holds both the

Choral Directing Diploma and the Fellowship of the Royal College of Organists,

and is a prize-winning holder of the Archbishops’ Certificate in Church Music.

prominent church of All Saints Northampton, leading nearly one hundred

members of their separate choirs of boys, girls and men, in seven choral

services each week. In 2007 he was appointed Musical Director of the

Northampton Bach Choir. With these choirs he has commissioned over

James MacMillan. The choirs have also toured extensively, from Canada and

the United States to Austria, Denmark, Germany, the Netherlands, Poland,

and Italy. These choirs have also made nearly a dozen recordings, most

recently Requiem Reflections, a disc of choral and instrumental works by

a Britten-Pears Scholarship to study with Judith Weir; this in turn led to the

at the South Bank Centre, London. He recently completed an arrangement of

Queen Elizabeth II at the Foreign and Commonwealth Office.

The composition describes the course of the river Vltava, starting from

the two small springs, the Cold and Warm Vltava, to the unification of

both streams into a single current, the course of the Vltava through

woods and meadows, through landscapes where a farmer's wedding is

celebrated, the round dance of the mermaids in the night's moonshine:

on the nearby rocks loom proud castles, palaces and ruins aloft. The

Vltava swirls into the St John’s Rapids; then it widens and flows toward

Prague, past the Vyšehrad, and then majestically vanishes into the

distance, ending at the Elbe in Germany.

To include Widor’s Mass for Choir and Organ