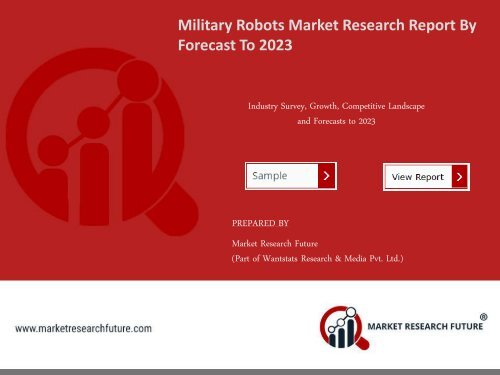 Military robots are designed for military applications comprised of search & rescue, transportation, mine clearance, and

targeting. It is expected that combat robots have become an inherent part of military forces and would replace humans for

obstacles are carried out by remote-controlled vehicles as it takes away the risk of the soldier’s life. Other dangerous

such as the U.S. and Russia, have modernized their armed forces and deployed weapons using robotics. The rise in

period. However, there are some shortcomings in operating performance of the military robots, such as difficulty in

achieving interoperability among so many different systems and technologies.

Various well known military robots are prepared by the U.S. and Russia, such as Uran-6, Skarabei, and Sfera, for various

military functions. Uran-6 was designed for performing tasks dealing with mine-reconnaissance and area-clearance

sources of noise/motion. For instance, AeroVironment UAVs, Tether Eye, a quadcopter is designed to provide surveillance

to perform combat performance in the military field.

Emerging technologies can bring military applications to new heights. The future deployment of robots is inescapable and

will save human lives and warfare to minimize damage to resources. The Predator UAV (unmanned aerial vehicle) is

probably the most well-known of these robots, having flown missions in the Middle East to eliminate terrorists. Predator

drones can also be used for monitoring and surveillance missions. These UAVs have high durability and can extend

Intelligent Service Robot (ISR) functions. Other key drivers expected to contribute towards the growth of the military robots

applications. For instance, AeroVironment signed a contract with the U.S. Army to provide submarines and armed robots for

next generation of warfare. Moreover, General Dynamics Mission Systems has acquired Bluefin Robotics, which performed a

wide range of missions for the U.S. military and commercial customers.

The military robots market is segmented based on platform, application, mode of operations, payload, and regions. On the

basis of payload, sensor is widely used and comprises the largest market share. On the basis of application, warfield is

and border surveillance. On the basis of platform, airborne is expected to witness the highest CAGR during the forecast

period due to rise in demand for drones across various industries. On the basis of the mode of operation, the autonomous

The market is segmented on region into North America, Asia Pacific, Europe, the Middle East & Africa, and South America.

various research institutes are developed. Countries such as the U.K, Germany, and France spend significantly on

development of their military sector. North America is second to the Europe market in military robots market due to

increased investment by the governments in military projects.

Thus, the global military robots market are estimated to witness a CAGR of approximately 9 % from 2017 to 2023.

At Market Research Future (MRFR), we enable our customers to unravel the complexity of various industries through our Cooked Research Report

enable our clients to see more, know more, and do more, which help to answer all their most important questions.

In order to stay updated with technology and work process of the industry, MRFR often plans & conducts meet with the industry experts and

All Rights Reserved. This document contains highly confidential information and is the sole property of Market Research Future. No part of it may be