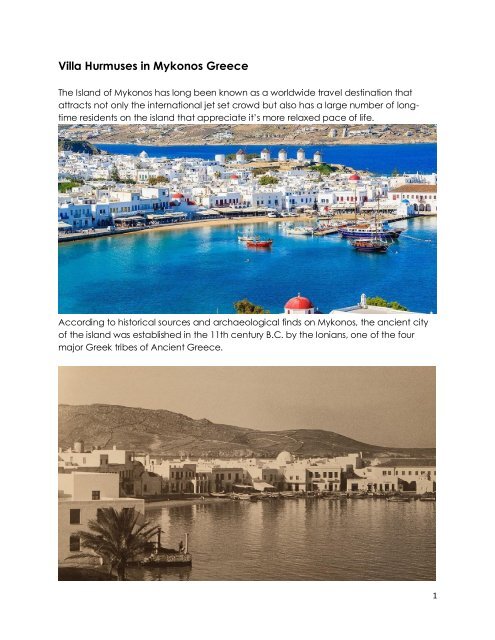 residents on the island that appreciate it’s more relaxed pace of life.

According to historical sources and archaeological finds on Mykonos, the ancient city

of the island was established in the 11th century B.C. by the Ionians, one of the four

Mykonos (Mikonos) is a Greek island and part of the Cyclades lying between Tinos,

inhabitants (2011 census), most of whom live in the largest town, Mykonos, which lies on

walking distance of the charming Mykonos Town and a picturesque beach.

The villa is open to breathtaking, panoramic views of the locations Mykonos has

become famous for – its sunset, its harbor windmills and its beautiful, traditional

decorated with handmade furniture and elegant Greek details in its design. The

famous getaway islands in the world.

Here you can sunbathe by the private pool, indulge your body with a soothing

massage under a pergola, or sip cocktails while gazing at the beauty of the island’s

Tucked in a serene corner near Mykonos Town, Villa Hurmuses offers the details the

and service. The care, thought and attention consistently given to the villa is one reason

Here are just a few more highlights of this exceptional property:

- Unobstructed views of the sea and town and the sunset.

all areas of the since the purchase of the property in 2001.

- There are 6 Bedrooms and 5 bathrooms and 1 guest toilet plus 5 bedrooms and 4.5

bathrooms in the Main house plus one bedroom, sitting room and bathroom in the

guest house located at the end of the pool (currently used by the live in staff).

- 40 kV generator added to the property in 2008 and well maintained. Yearly

the mainland, the cost of electricity has drop significantly and the use of the generator

- Listed as one of the Top 20 Villas in Greece by Conde Nast Traveler.

- The property is 100 percent legal, with no mortgage and conforms to all Greek laws.

Over the past number of years, in referencing the villa rental market range throughout

Europe, Greece is the one country where owners have been able to maintain a healthy

rental rate or even increase their rate due to demand in high season.

in 2015 and this has increased steadily since then. At the peak of last year’s tourist

season in July, the average booking cost for a twin room in Mykonos was 705 euros per

high end restaurants - Buddha Bar, Scorpios, and LingLing by Hakasan which have all

been remarkably successful since opening.

and it’s compliance to the environment, as well as the permit to rent or sell the

the end of September and this has well been established since inception in 2002. Full

details of this can be provided.

end of September of each passing year.

under the new ownership. They have been with us and taken care of the villa since

2002 and are responsible for the year round maintenance and services of the villa.

- 90% of the reviews on all villa websites such as TripAdvisor, etc., focus on the staff and

their outstanding ability to take care of the guests and make them feel welcome.

Mykonos Airport is located 4 kilometres (2.5 mi) southeast of the town of Mykonos and it

is served by international flights during summer. The flight from Athens to Mykonos takes

out of Mykonos during the summer months, with a new wing for VIP’s and their private

Mykonos is also accessible by boat and ferries. High speed vessels visit daily from the

surrounding islands and from Athens.

Taxis, buses or boats are available for transportation. There are three main bus depots in

Mykonos. Small boats travel to and from the many beaches.

For more on details and price, please contact Hanane Dawson: