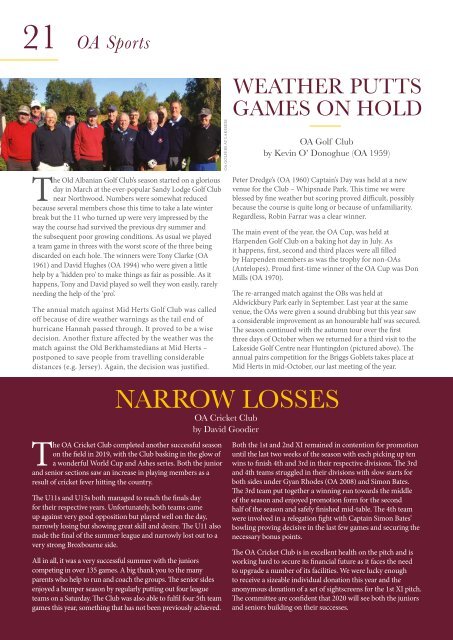 Versa is a biannual publication and will be published every autumn and spring term. Versa has replaced the former magazine, OA Bulletin and will offer a comprehensive insight into the many facets of alumni life.

The Old Albanian Golf Club’s season started on a glorious

day in March at the ever-popular Sandy Lodge Golf Club

near Northwood. Numbers were somewhat reduced

because several members chose this time to take a late winter

way the course had survived the previous dry summer and

the subsequent poor growing conditions. As usual we played

discarded on each hole. The winners were Tony Clarke (OA

help by a ‘hidden pro’ to make things as fair as possible. As it

needing the help of the ‘pro’.

The annual match against Mid Herts Golf Club was called

off because of dire weather warnings as the tail end of

hurricane Hannah passed through. It proved to be a wise

decision. Another fixture affected by the weather was the

match against the Old Berkhamstedians at Mid Herts –

postponed to save people from travelling considerable

on the field in 2019, with the Club basking in the glow of

a wonderful World Cup and Ashes series. Both the junior

and senior sections saw an increase in playing members as a

The U11s and U15s both managed to reach the finals day

for their respective years. Unfortunately, both teams came

up against very good opposition but played well on the day,

narrowly losing but showing great skill and desire. The U11 also

All in all, it was a very successful summer with the juniors

competing in over 135 games. A big thank you to the many

parents who help to run and coach the groups. The senior sides

enjoyed a bumper season by regularly putting out four league

teams on a Saturday. The Club was also able to fulfil four 5th team

games this year, something that has not been previously achieved.

venue for the Club – Whipsnade Park. This time we were

because the course is quite long or because of unfamiliarity.

Regardless, Robin Farrar was a clear winner.

The main event of the year, the OA Cup, was held at

Harpenden Golf Club on a baking hot day in July. As

it happens, first, second and third places were all filled

by Harpenden members as was the trophy for non-OAs

(Antelopes). Proud first-time winner of the OA Cup was Don

The re-arranged match against the OBs was held at

Aldwickbury Park early in September. Last year at the same

venue, the OAs were given a sound drubbing but this year saw

a considerable improvement as an honourable half was secured.

The season continued with the autumn tour over the first

Lakeside Golf Centre near Huntingdon (pictured above). The

annual pairs competition for the Briggs Goblets takes place at

Mid Herts in mid-October, our last meeting of the year.

Both the 1st and 2nd XI remained in contention for promotion

wins to finish 4th and 3rd in their respective divisions. The 3rd

and 4th teams struggled in their divisions with slow starts for

both sides under Gyan Rhodes (OA 2008) and Simon Bates.

The 3rd team put together a winning run towards the middle

of the season and enjoyed promotion form for the second

half of the season and safely finished mid-table. The 4th team

were involved in a relegation fight with Captain Simon Bates’

bowling proving decisive in the last few games and securing the

to upgrade a number of its facilities. We were lucky enough

to receive a sizeable individual donation this year and the

anonymous donation of a set of sightscreens for the 1st XI pitch.

The committee are confident that 2020 will see both the juniors

and seniors building on their successes.

The Old Albanian Football Club, resurrected in 2016 and

Following the disappointment of narrowly missing out on

league promotion last season and armed with a few new

additions to the Albanian ranks, the 2019/20 cohort were sure

to come out all guns blazing during the annual pre-season

However, with co-founder and former Club captain Alex

Addison (OA 2005) taking a sabbatical to set up occupancy

Down Under, the reigns couldn’t have been passed onto

D’Rosario. Woollams for some, has been nothing but a

fortress, racking up decades of seasons between the fleet of

Our Ladies’ team, having gained promotion at the

end of 2017, had some challenging matches but

ended up a very respectable 4th in Division 4 of

the Watford League. Our Men’s team, having been demoted

to Division 2 at the end of the 2018 season, have succeeded

in winning the League – many congratulations to all who

played. They will now return to Division 1 for next season.

Our Mixed teams had some very close matches and ended

up a very creditable 4th in Division 3. All in all, a good

On a very sad note, Iain Wagstaff, a regular member

of our Men’s and Mixed teams, was tragically killed in

September. He will be greatly missed and our condolences

go to his family and friends.

former sporting Albanian all-stars. Much pressure has been

placed on such young shoulders as D’Rosario’s tenure began

by leading the team out at Woollams against none other than

Martin Dobson and Smithy the Groundsman whose facilities

and pastures were as well kept as ever), the A’s were reminded

of the legacy they pledged to protect, embarking on their first

competitive fixture as a new band of brothers.

Following a key decisive win, the squad has created

invaluable early momentum and at the time of writing,

story to write. For those looking to support, join or stay up to

date with progress throughout the season please feel free to

get in touch at oldalbaniansfc@gmail.com.

Ready for the winter season, we have once again entered

a Mixed team into the East Herts Autumn League and a

As a new venture, we have introduced a box league for

Club members, which will consist of doubles matches

and will run throughout the autumn and winter. The Sue

Barnes Memorial Event was unfortunately rained off in

September and will now be held in the New Year.

We now have a new website address. Many thanks to John

Cooper for giving up his time and being very patient with

us! The address is www.oatennis.com if you wish to find out

more about us. We continue to welcome new players to the 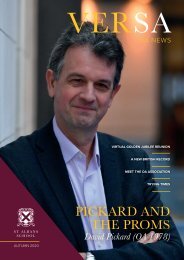 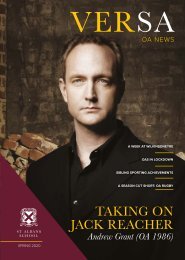 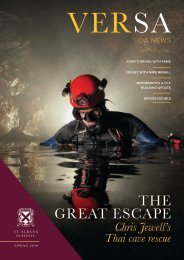 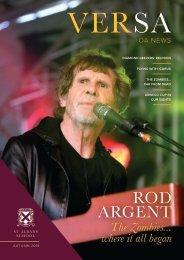 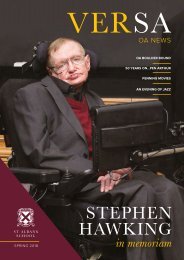 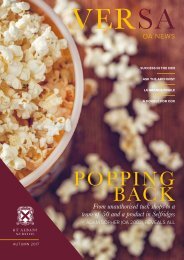