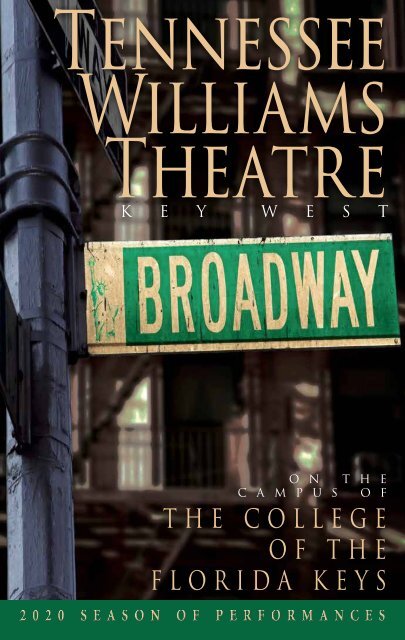 This Olivier Award-winning comedy is a hilarious hybrid of

of The Murder at Haversham Manor where things are quickly

going from bad to utterly disastrous. With an unconscious

leading lady, a corpse that can’t play dead, and actors

who trip over everything (including their lines), it’s “A

and “TONS OF FUN FOR ALL AGES!” (HuffPost). Ben

Brantley of The New York Times calls THE PLAY

THAT GOES WRONG “A GUT-BUSTING HIT,” and

Cindy Adams of the New York Post has just

it would be WRONG to wait!

An Evening with Broadway Leading Lady

/ storyteller in his most electrifying role: concert performer. “Mandy Patinkin

is in the business of showstopping,” raves The New Yorker, and that’s exactly

what he does in this powerful, passionate evening of song. DIARIES is a

marriage of many of Mandy’s favorite Broadway and classic American tunes,

along with selections from his newest recordings on Nonesuch Records,

From Randy Newman to Stephen Sondheim, from Harry Chapin to Rufus

Sponsored by Judith and Stanley Zabar

with Adam Ben-David on piano

THE BEST SINGING, DANCING, STOMPING SHOW YOU’VE EVER BEEN TO!

LEAVE YOUR WORRIES IN YOUR COAT AND GRAB A PINT!’

Sutton Foster is an award-winning actor, singer and

dancer who has performed in 11 Broadway shows – most

recently the revival of Violet – and originated roles in the

Women, Young Frankenstein, Shrek The Musical, and her

Tony Award-winning performances in Anything Goes

and Thoroughly Modern Millie. She can currently be seen

in the starring role of the TV Land series Younger and

will return to Broadway in 2020 to star opposite Hugh

Jackman in the revival of “The Music Man.”

FEATURING THE MUSIC OF

AND MUCH, MUCH MORE!

The Tony Award®-winning revival that exhilarated Broadway is now

on tour across North America. With a soul-raising, Grammy®-winning score

of jazz, gospel, ragtime and blues, The Color Purple is an unforgettable

and intensely moving revival of an American classic. Based on the

film, The Color Purple leaves its mark on the soul.

Don’t miss your chance to be mesmerized

when this joyous show comes to Key West.

BACK BY POPULAR DEMAND!

The great ones endure, and Gladys Knight has long been one of the greatest.

artistry. This seven-time Grammy winner has enjoyed #1 hits in Pop,

Gospel, R&B and Adult Contemporary, and has triumphed in film,

a coveted star on The Hollywood Walk of Fame. In 2009, she received

Witch in “Wicked” in 2004. Chenoweth has been nominated for two

Emmy Awards and a People’s Choice Award for her role on “Glee.” In

2009, she wrote an upliftingly chronicle of her life so far, A Little Bit

Wicked, which debuted on the New York Times Best Seller List. Her

“For the Girls” Concert debuted on Broadway in November.

OF THE FLORIDA KEYS

winner of BBC TV’s Even Better Than the Real Thing.

“Davids is mind-blowingly spot on as Whitney Houston.”

“If I had shut my eyes, I’d have been convinced

that I was listening to the legend herself.”

— What’s On In Cape Town

“Davids is a sight to be seen, stunning in sheer star power

and a voice that astounds.”

BACK BY POPULAR DEMAND!

ONE NIGHT OF QUEEN

& THE WORKS is a spectacular

the greatest rock band of

all time. They have been

hailed as the World’s

Band and have received

“The Songs of Harold Arlen

In the Grand Foyer Cabaret

Mercer”. Joining Bobby will be everyone’s favorite girl singer, Carmen Rodriguez, and in

his only Key West appearance, the legendary Danny Weathers.

Act one celebrates the music of Harold Arlen, composer of Stormy Weather,

Over The Rainbow, Get Happy and countless more. His frequent collaborator,

like Moon River, That Old Black Magic and Skylark.

Together with seven of Key West’s finest musician’s, Dave Bootle steps out

bands and artists who inspired him to pursue a career in the music business. The

original compositions to round out the evening. Sing and clap along to a music and

story-filled night that you definitely will not forget!

Are you ready for a brand new beat? Here comes Motown with a Twist — a new twist on classic Motown. It’s a

the Stars performing with finalists from So You Think You Can Dance, and vocals by American Idol, The Voice, and

Robinson to The Jackson 5 with everything in between. You’ll Twist and Shout to Motown with a Twist .

This 17-piece big band is

one night that you don’t

for an Evening of Farce,

Frivolity and a Feast of

Fun mixed with a dash of

Under the baton of Joe Dallas Jr., the band remains a truly “local” organization

and primarily Key West. In the interest of enhancing both solo and ensemble

NPR’s From the Top,

feature a special lineup of hosts and co-hosts.

Sponsored by The Helmerich Trust

NARDI: Upon An Ocean (world premiere)

BEETHOVEN: The Consecration of the House, Op. 124

IN ITS SEVENTH SEASON, the College’s VIP Series invites the community to learn from the Visions, Ideas, and Perspectives of

speakers of local, regional, and national prominence. The 2020 season, sponsored by Centennial Bank, includes presentations that

focus on timely and relevant topics.

Examining some of the women who have shaped Florida, including Dr. Esther Hill Hawks, a physician who ran the first racially

industry with her 1873 book, Palmetto Leaves; and May Mann Jennings, a suffragist and conservationist who helped establish Royal

The potential role of herbivorous crabs in facilitating coral reef restoration efforts in the Caribbean and Florida Keys. These

from entering the United States. Cuban authorities looked the other way as smugglers transported them to Key West, pitting them

against powerful local officials who belonged to the Ku Klux Klan and inspiring Ernest Hemingway’s novel To Have and Have Not.

from popular works plus other original works under the direction

The Greatest Love of All:

— www.keystix.com. Patrons can easily browse available events on sale, then choose and purchase specific seats with a secured

credit card transaction. Internet tickets will be either held at Will Call or mailed (extra fee). All patrons, regardless of age, must have a

ticket. There is a processing fee for all ticket sales.

Please bring photo ID and credit card used when picking up tickets at WILL CALL.

To Purchase by phone:

by to answer any questions and to assist in your ticket purchasing experience.

To Purchase tickets in person:

How to Find Us

Tennessee Williams Theatre is located on the

campus of The College of the Florida Keys

Join our E-mail list and be among the first to learn about shows,

special deals, and on sale dates. Visit Keystix.com and sign up today!

OF THE FLORIDA KEYS

This Olivier Award-winning comedy is a hilarious

to opening night of The Murder at Haversham Manor

where things are quickly going from bad to