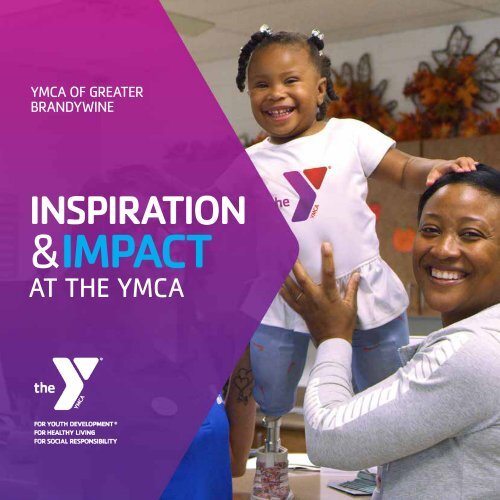 LIVES AT THE Y

Thank you for making 2019 another successful

year in delivering the YMCA of Greater Brandywine’s

As you read the stories of some of those whose lives

have been changed for the better at the YMCA this

year, we hope you are as inspired as we are. There

is the student who found his calling after finding his

voice, thanks to our Youth and Government program;

the mother and daughter who found acceptance and

integration in our childcare program; and the senior

who turned his life around, finding a healthier lifestyle

So far this year, your support has enabled us to provide

financial support to more than 10,000 people so that

family who lost so much after a cancer diagnosis, or the

girl who was being bullied, but found her courage and

confidence in our Power Scholars program.

During this season of giving, please help us to finish

the year strong by donating to the YMCA. Whether

your donation comes in the form of lending your time

and talent for any number of our causes or a monetary

donation so that we

can help even more

who need us, we

impact it has on our

Paisley Minor is a

was born with a rare

caused her to have

Paisley joined the toddler class at the Brandywine

YMCA and was quickly accepted. “The teachers

learned about Paisley’s disability and integrated

her, as well as helped the other toddlers learn

about and accept Paisley’s uniqueness,” shares

her mother Paige, a Major in the U.S. Marines.

“Paisley does not feel like she is different,” Paige

continues, “and, in five months, she was taking

some steps on her own!”

Paisley is a joyful child, making friends with staff

at the front desk and members who share the

therapy pool with her, but her greatest gift to the

Y may be helping others become more accepting

of people of ALL abilities, which she is doing just

As Paige sees how accepting the Brandywine

YMCA community is of Paisley, she notes that it

is “time to teach people! Acceptance of people

and their differences is what the world needs

lead to a healthier

meaning his blood pressure could jump to

levels at any moment. It causes him to fall … a lot.

It was after one of those falls that his three sons

insisted he move closer to them, so last January

Joseph and his wife moved to Thorndale, PA.

around his new place for a couple of weeks. “I had

to do something,” he recalls. “Just sitting around

the apartment was not going to work!”

week. “I really look forward to my daily routine. I

and see friends I have met since coming here,”

pounds and set a new goal of dropping to under

“I’m healthy and happy now,” Joseph says with a

big grin. “And the best news is I haven’t fallen at

all since moving here! I love the Brandywine YMCA.

It is so friendly, so nice. And, they host monthly

lunches for us retired folks, where I’ve met even

with the help of the Y

Veronica Sanchez was diagnosed with Stage 4

lung cancer in August 2017. Given eight months to

a year to live, the wife and mother of two knows

she is living on borrowed time. “I want to spend as

much time with my kids as I can, but with the side

effects of my medication, there aren’t many places

where that is possible,” says Veronica.

The hardships this family has faced since the

diagnosis, include moving out of their two-story

home because of physical challenges, losing 40%

of their belongings when their rental property

flooded out and Veronica losing her nursing job

when the doctor she worked for retired.

“We have tried to do everything ourselves,”

Veronica continues. “But with being unemployed

since December and the cost of my medication,

Veronica and her family received a reduced rate on

their YMCA membership through the YMCA’s financial

assistance program, which is funded by donations.

“When I came into the Upper Main Line YMCA,”

Veronica shares, “it was so nice to feel that it

wasn’t wrong to ask for help. Everyone has made us

feel as though we are friends they want to help.”

As Veronica continues to beat the odds, she shares,

“When you’re a mom, getting up in the morning is

not an option. The Y has given me a chance to do

something for my children and they are so happy

when we are together.”

A study by the American Journal of Medicine found that 42%

two years because of treatment. The average amount a cancer

Pictured above: Veronica Sanchez with her family

old, but prior to

others to join his

President & CEO of Key Financial, Inc. At the Kennett

fellow camper whose family had fallen on tough

times and could not afford lunch, so Owen and his

mother brought the camper lunch every day. He

explained, “I thought if we helped support them,

then when we need help someone would support us.”

Others joined Owen in his #10for10 campaign and

helped him pay it forward by donating just $10 in

honor of his 10th birthday on September 3. “I think

all kids should have the opportunity to go to summer

camp,” Owen said, “because they can make new

matching the total he had raised at that point.

“There are a lot of people in our community that

CEO of Key Financial, Inc. “Thank you, Owen, for

setting such a good example.”

“Six years ago, I wouldn’t have been able to stand in front of you

like I am today,” said Kristian Williamson, as he addressed a room

of more than 100 people at the Brandywine YMCA’s Annual Dinner.

program five years ago, he hesitated. “I was unsure because I

didn’t have much confidence in myself,” he said. But he took a

chance and joined the program, saying everyone kept pushing him

planning on applying to Princeton and Rutgers University to study

law,” said Kristian. “This program has improved my social skills

and my confidence, as well as my public speaking ability.”

The Y’s Youth and Government Program helps middle and high

school students develop into strong citizens and gives them the

opportunity to get involved with every aspect of our government.

As one of 80 YMCAs that are considered Diversity, Inclusion

and Global Innovation YMCAs, the YMCA of Greater

Brandywine is committed to this work at all levels of our

association while working to ensure that everyone in our

their faith, beliefs, diversity and inclusion in the community.

“It was tremendous to hear how the students felt about the

secular school system, living in a materialistic world and

diversity clubs that can be created,” shared Melissa Schleyer,

Executive Assistant of the Lionville Community YMCA. “Most

could share their thoughts, ideals and opinions. They were

happy to be heard.”

this event and for inviting us to be part of it. The questions

were thought-provoking, giving us an opportunity to gain a

renewed appreciation for each other’s faith. I have not come

across another YMCA which is so focused on diversity!”

When staff at the Lionville Community YMCA heard

many members were traveling all the way to northern

New Jersey to play cricket, they started a league and

provided the necessary equipment to get it going. The

fast-growing sport is also being offered during a week of

summer camp at the Lionville Community YMCA in 2020.

Aika had the best summer of her

life. She got better with her studies

and the YMCA’s staff found a way

to truly reach her.

Experiencing the power of

The Y’s Power Scholars Program is a five-week

and emotional growth. For Aika Muhammad and

her family, the program has been a life-saver.

When the Muhammad family moved to Chester

was bullied in her new school, causing her to

glimpses of the girl she used to be. It was then she

was invited to participate in our Power Scholars

program, which the Y was able to offer at no cost

to the family, thanks to many generous donations.

“Aika had the best summer of her life,” says her

mother Michelle. “She got better with her studies

and the staff found a way to truly reach her and

tend to her needs, academically and socially. She

was able to turn her attitude toward academics

around and looked forward to the upcoming school

year – something she had never done before.”

At school, Aika’s grades improved and she became

more comfortable talking to her teachers when

she had a problem. “She was out of her shell!”

honor’s WATCH list and her younger sister Jamilah–also a

Power THE VIDEO! Scholars student-is on student council with

a mission to help other children in the school, just

like she sees with the staff at the YMCA.”

give their time and talents

to our YMCA Association

tweens and teens were offered

a safe haven through the Y’s

healthier habits through our

AND BEFORE & AFTER SCHOOL

The YMCA of Greater Brandywine was awarded more

The grants support key programs such as our Earth

lessons, and LIVESTRONG, as well as providing financial

assistance to those who are unable to pay the standard

capital improvement of our branch facilities, both of which

allow us to better serve our members. We are incredibly

grateful to the many organizations who generously

support our work and help us make a greater impact

THANK YOU TO ALL YMCA DONORS 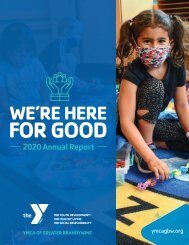 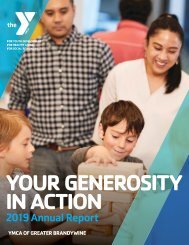 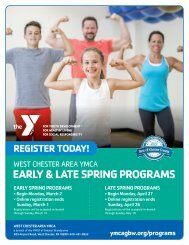 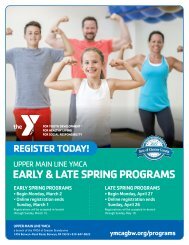 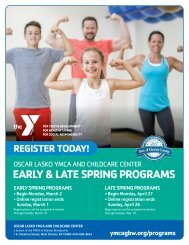 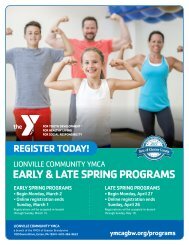 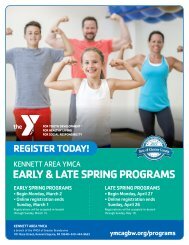 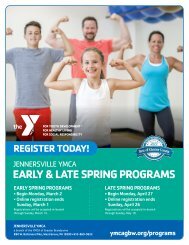 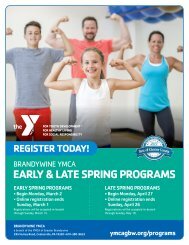 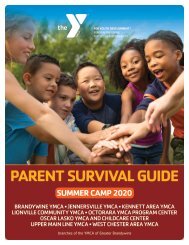 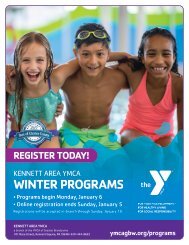 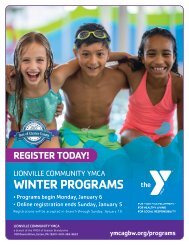 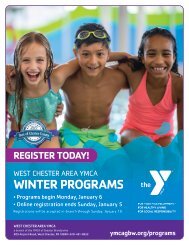 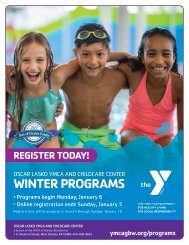 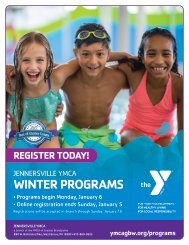