This is the brochure from the December 6th Presentation of the Black Archive Alliance Volume II presented at Le Murate Art District. Black archive Alliance is a Villa Romana project in collaboration with Black History Month Florence.

A Villa Romana project in collaboration with Black History Month

research projects conducted in several archives located in the Florentine

territory. This research offers us insights into the history that links Florence to the

African continent and to Afro-Descendant people and cultures. The presentation

public to learn about the project in a phase of development, anticipating the

populations, their diaspora and their representation across in a series of archives and

public and private collections. The first edition created a virtual map of this archival

project. The "mentors" followed a small group of students in the development of short

text which will be published in the second edition of the catalog in 2020. This edition,

elaborated over several phases consists of a research period, a public presentation

research and the presentation of the final catalog.

Ingrid Greenfield; Scholar and Assistant to the director; Villa I Tatti

Granduchi,’ sculpted into side-blown horns by artists in the kingdom of Kongo and

acquired by the Medici in the mid-sixteenth century. The elaborate geometric motifs

the surface of ivories, but also in rock paintings and engravings, terracotta pottery,

woven textiles, and even scarification patterns on skin. After direct contact with the

to identify as a Christian aristocracy, the presentation of prestige objects like these

between African and European rulers and states. Though we currently know little about

exactly how these particular African objects reached Italy in the early modern period,

elites for display in their collections, their beauty and strangeness signaling the wealth

and power of their owners.

Territory in the image and image territory: The Italian invasion in Ethiopia through the

and manifestation in geographical maps. In a small collection of private photo albums in

the archive of the Istituto Geografico Militare, the professional and private views of the

geographers merge when surveying Ethiopian territory. A subjective narration of the

by the documentation of temporary interventions such as military assemblies, refugee

camps, exposed war trophies and rocket ramps. The success of the military enterprise is

finally reflected in photographs of the permanent monuments, buildings and technical

infrastructures of a ‘modern’ occupier.

Andrea Aguyar and the Defense of the Roman Republic

Andrea Aguyar was born into slavery in Montevideo, Uruguay in the early 1800’s. His

exact date of birth and parents are unknown. Aguyar met Garibaldi during the civil war

of Uruguay in which both fought for the Liberal Colorado’s. After the civil war, Garibaldi

went to Brazil with his new-found companion, Andrea Aguyar to continue liberating

slaves. In 1848, Garibaldi returned to Italy with Aguyar by his side, after he proved

himself on the battlefield many times. Aguyar was commonly known for fighting with a

lasso while riding horseback. He would lasso his enemies off of their horses in the field

of battle and is said to have saved Garibaldi numerous times on the battlefield. Andrea

a nearby bomb exploded. He gave his life for Italy to defend Rome from French

occupation. Andrea Aguyar was a hero that believed in the idea of a Republic and

fought for it until the very end.

the 60s and the contemporary political moment in Florence. To conclude, I discuss the methods

Searching for Africa in the collections of the Biblioteca Medicea Laurenziana

The Biblioteca Medicea Laurenziana, opened in 1571 is formed by many different

collections of manuscripts, papyri and first edition books. Due to the complexity of the

way how the manuscripts and books are cataloged at the Laurenziana, in the following

students start to research in the Orientale collection, wanted by Grand Duke Ferdinando

I, where there is a section of Ethiopian manuscripts. In the research, classic authors who

wrote about Africa as the Greek historian Herodotus (5th century B.C.E.) will be taken in

III that are now on display in the Biblioteca Laurenziana.

resulting alienation experienced by indigenous African peoples. Through an assessment

of photographs as well as captions, I seek to articulate pro-colonialist narratives and

practices, as well as Italy's voyeuristic approach to the colonies and their people.

portrayal of African women through Italian photography. I am interested in the ways in

and animalization of colonized populations emblematic of the European colonial era. 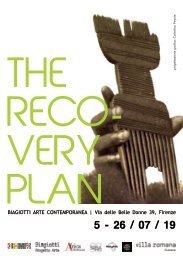