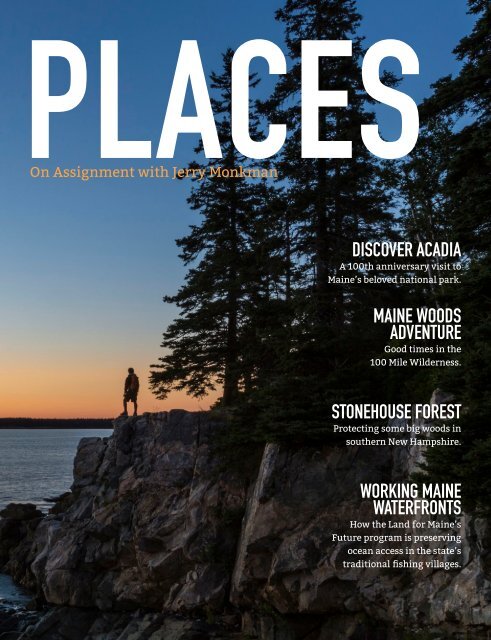 On Assignment with Jerry Monkman

A 100th anniversary visit to

Good times in the

Protecting some big woods in

How the Land for Maine’s

Lobsterman Ryan Schultz, after a day of working the wharf at the Friendship

Lobster Coop in Friendship, Maine. This wharf is one of 40 along the Maine

coast that has been preserved as working waterfront. See story on page 14.

This is our second issue of “Places” and it could just as easily be titled “People.” Though I

first became known for my nature and landscape photography, I am increasingly called

upon to describe the places I shoot in terms of the people living, playing, and working

there. That has been especially true this year, although I can’t help but shoot some

landscapes as well. I’ve devoted much of my summer to a project for the State of Maine’s

Land for Maine’s Future program, which has been working to preserve access to the sea

for fishing families up and down the Maine coast. This project has been a fascinating

tradition of fishing in the Gulf of Maine.

This year hasn’t all been about hard work though. I’ve also been fortunate to be making

on the 4th edition of my book, Discover Acadia) and in Maine’s 100 Mile Wilderness,

among other places where hiking boots or paddles are required, and where the scent of

pine and the warm light of summer define the rewards of the day.

Good times in the 100 Mile Wilderness.

How the Land for Maine’s Future program is preserving ocean access in the state’s traditional fishing villages.

On the Cover: A hiker watches daybreak over the Gulf of Maine in the Schoodic section of Maine’s Acadia National Park

A 100th anniversary visit to Maine’s

By the time you read this, my wife Marcy and I should have turned in the last of our text

for the 4th edition of our book, Discover Acadia National Park. (If not, I’m screening

my calls, trying to avoid the wrath of our editor at AMC Books!) In addition to the usual

tasks of revising a guidebook, like checking out new trails and the condition of old

ones, I’ve been working on shooting some new images for the book. This will be the first

color version of Discover Acadia, so I’m excited to have some fresh views of the park to

show off. While we already have a good collection of stock photography from Acadia, I

favorites with new friends. In addition to seeing some amazing sunrises, I also learned

lobster roll in the process.

Above left: The sun rises from behind Acadia’s

mountains as fog rises from the shores of Echo

Above right: Kayakers ply the waters of Jordan

Pond in the heart of Acadia.

Bottom right: A couple takes a break from hiking

in the quiet forest below Beech Mountain.

the key to classic

When I began my photography career

more than 20 years ago, one of my first

clients was the Appalachian Mountain

that focuses on conservation, recreation,

and outdoor education. Back then I

shot a story about Mahoosuc Notch for

their publication, AMC Outdoors. The

notch, north of the White Mountains on

the Maine/New Hampshire border and

considered by many to be the hardest

mile of the entire 2100-plus miles of

the Appalachian Trail is filled with

house- and car-sized boulders that must

be climbed over or under with a full

pack to get from one end of the notch

to the other. This one mile of trail takes

2 to 3 hours to hike and the rocks are

relentless, leaving the shins and knees

of most hikers bruised and bloodied. Of

course, after that shoot I was hooked on

photographing in the Appalachians, and

I’ve been shooting projects for AMC ever

since. This past June I took advantage of

one of their Maine Wilderness Camps

to shoot some new adventure photos

in a little more comfort than that first

assignment. Any blood donated to the

cause this time was taken by the black

flies that the Maine woods are famous

for, but the beauty of the landscape more

than made up for this minor annoyance.

Below right: Ben takes a turn in the canoe as the

me at Gorman Chairback Lodge, which

is east of Greenville, Maine, and is

adjacent to the 100 Mile Wilderness

section of the Appalachian Trail. The

lodge and its companion cabins are on

the wild shores of Long Pond, and a short

hike away from Gulf Hagas, a three

holes and waterfalls. With the help of

and Dan Reed, I was able to shoot the

gang enjoying the area’s paddling and

hiking opportunities. In between the

intense moments of concentration while

shooting, I marveled at our good fortune

to have beautiful light on the one day we

had to shoot and at how easy it is to get

people to relax for a portrait when out in

nature. I’ve dedicated much of my career

to conserving wild places, and watching

the stress melt away on friends’ faces

while out in nature reminds me how

important these places are, not only to

the plants and animals that live there,

but to us humans who need nature’s

Above left: Ashley and Dan during their sunrise

Below left: Exploring the swimming holes

Right: Dan Reed is ready for a paddle.

funds to conserve the 1500 acre property, one of the largest remaining, unprotected forest

blocks in the state south of the White Mountains.

How the Land for Maine’s Future program is preserving

Maine is famous for its beautiful

shorelines and the bounty of seafood

caught offshore in the Gulf of Maine, one

of the most productive fisheries in the

world. One of my jobs this past summer

was to document several working

waterfronts in Maine where commercial

fishing operations have existed for

decades (or centuries), but are now

more than ten years, the state of Maine’s

has been giving grants to commercial

and municipal wharves up and down the

for fishermen and women. As more and

Maine coast, the value of coastal land has

risen to levels well above the value of the

land if it is used for commercial fishing

narrow that gap in values while insuring

that the land will be used only for fishing

This gig was a blast. I spent hours at a

time on these wharves (from Harpswell

to Beals Island,) swapping stories with the

men and women working the wharves

and taking in the banter between

boat captains and their crew. I met a

to the sea, as well as an eleven year-old

girl who is a fourth generation lobster

fisher (she keeps ten traps in the water,)

who dared me to walk into the bait cooler

and take a deep breath. When I told her

it couldn’t be as bad as filming in a dairy

barn in the heat of August, she just smiled

and raced me to the cooler (I was wrong –

it was nasty.) The hot sun of midday was

tempered by the breezes off the gulf, but

everyone was usually exhausted by the

end of the day.

Above left: Mark Havenar loads bait onto his

Top: A recently caught lobster at the Friendship Lobster Co-op in

unloading lobsters at the Friendship Lobster Co-op in Friendship, Maine.