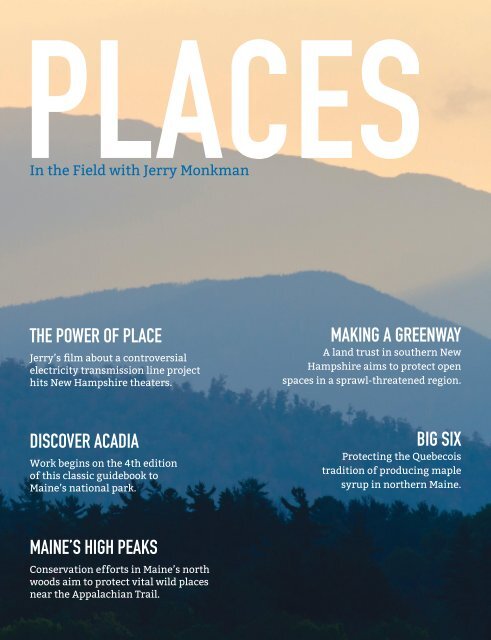 In the field with conservation photographer Jerry Monkman.

In the field with conservation photographer Jerry Monkman.

In the Field with Jerry Monkman

THE POWER OF PLACE

Jerry’s film about a controversial

A land trust in southern New

spaces in a sprawl-threatened region.

Work begins on the 4th edition

of this classic guidebook to

near the Appalachian Trail.

In the Field With

The sun shines through a grove of Eastern

2015 has brought me to a variety of beautiful places in New England. Many are

relatively unknown, some are threatened by development, all are worthy of

permanent protection. Several of my projects this year involved photographing

second homes. This has been the case for many of the places I have worked over the

course of my 20+ year career. What’s becoming clear to me is that over this time

span, my clients have successfully begun a process of not only protecting land for

wildlife and recreation, but they are also creating corridors from north to south,

and from sea level to alpine zones, that will help some species survive the coming

change in climate, and I expect much of my work in the ensuing decades will

be guided by climate change.

Most of the stories here have appeared in one form or another on my website, but

I still love seeing photos printed on paper, hence this magazine. I hope you enjoy

turning the pages as much as I enjoyed putting these photos and stories together.

Work begins on the 4th edition of this classic guidebook to Maine’s national park.

A land trust in southern New Hampshire aims to protect open spaces in a sprawl-threatened region.

Jerry's film about a controversial

Funded through a successful Kickstarter campaign in 2013, my first

feature-length documentary, The Power of Place, premiered to a sold out

crowd at the Red River Theatre in Concord, NH back in March. The film has

since screened throughout New Hampshire, in Boston, and most recently

as an official selection of the New Hampshire Film Festival. The film looks

at the potential impacts of a proposed electricity transmission line dubbed

Northern Pass that will traverse 190 miles of New Hampshire, and

features interviews with a diverse collection of New Hampshire residents –

from a third generation dairy farmer, to a veteran NBA forward, to a state

senator – all of whom fear the negative impacts of the project. The Power of

Place can be streamed on-line at Vimeo On Demand: https://vimeo.com/

Photo above left: A hill farm in

Stewartstown, New Hampshire, was in the

cross-hairs of the Northern Pass project as

Photo bottom right: This view of the White

is threatened by Northern Pass

Work begins on the 4 th edition

of this classic guidebook to Maine’s

In 2000, my wife Marcy and I wrote our first book, Discover Acadia National Park

for AMC Books. At the time, it was the first guide in the region to provide detailed

quiet water paddling. This sort of ‘combined sports’ guide is now common, but

Discover Acadia still remains one of our most popular books. This summer we

began researching what will be the 4 th edition of the book, to be released in 2017.

be featuring stand up paddle boarding in the guide. When writing the 1st edition,

years later, but we are now looking forward to exploring our favorite waterways

in the park in a new way.

Photo above right: Teenagers walking on

Sand Beach after a day of hiking

the granite ledges on Cadillac Mountain

acres in the area were privately owned

and unprotected. More than 30 miles

of the Appalachian Trail traverses

the High Peaks, and the expanse of

working forests in the area are wellknown

for having one of the highest

concentrations of moose in the state.

for the threatened Bicknell’s thrush,

and the area's cold water streams and

and Atlantic salmon. In previous

efforts on Mount Abraham and

Crocker Mountain. This year, I shot

Land - in Reddington Township, near

Saddleback Mountain, and in the

Photo left: A cow moose near the headwaters of

Photo above right: The Appalachian Trail on

Photo next page: Dawn breaks over the Bigelow

A land trust in southern New Hampshire aims to protect

open spaces in a sprawl-threatened region.

Southern New Hampshire is one of

the fastest growing areas in northern

New England due to its beautiful open

spaces combined with its proximity to

New Hampshire, and Portland, Maine. Of

course, the fields, forests, hills, and

rivers that make up that open space are

being gobbled up by development. The

done by a variety of organizations that

are striving to protect priority southern

New Hampshire wild spaces, from the

oyster beds of Great Bay, to the

Today, the NGO taking the lead in the

region is the Southeast Land Trust of

New Hampshire, which is working in

conjunction with several towns, the

state, and other NGO’s to conserve a

acres in Pawtuckaway State Park in

Deerfield. This year, I photographed

the land trust totaling close to 3500

acres that will protect key links in the

Photo above left: Spring clouds over a

recently conserved hayfield that is part of

more than 1100 acres of contiguous open

Photo above right: A family enjoys a

Photo next page: The Lamprey River in

southeastern New Hampshire is one of only

two rivers in the state to be federally

designated as a Wild and Scenic river

of producing maple syrup in

In April, I made the trip to Big Six Township, on Maine’s border with Quebec, to

photograph a unique conservation project being undertaken by The Trust for

Public Land. The 25,000 acre township is currently owned by one central Maine

family, who manages most of the property for sustainable timber harvesting.

However, about one third of Big Six has been managed primarily for sugar maple

Quebec, who lease the trees and tap them every spring. With upwards of

80,000 taps on the property, Big Six syrup producers harvest 3 to 4 percent of

the entire US syrup crop. Harvesting the spring sap run is a tradition that has

been sustaining these families for four generations. To insure this tradition can

continue, The Trust for Public Land is working with the landowner, The US Forest

Service, and other partners, to permanently protect the Big Six “sugarbush” with

trampled by moose and taps pecked out of trees by woodpeckers

Photo next page: Approximately 4% of the US syrup crop is produced in Big 6 and shipped to