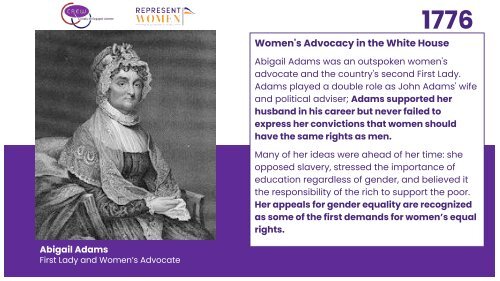 Women's Advocacy in the White House

Abigail Adams was an outspoken women's

and political adviser; Adams supported her

husband in his career but never failed to

express her convictions that women should

have the same rights as men.

Many of her ideas were ahead of her time: she

opposed slavery, stressed the importance of

education regardless of gender, and believed it

the responsibility of the rich to support the poor.

Her appeals for gender equality are recognized

as some of the first demands for women’s equal

The Seneca Falls Convention was held in Seneca

Lucretia Mott organized the meeting, which was the

first women's convention to discuss the

oppression of women in sociopolitical, economic,

Organizer of the 1848 Seneca Falls Convention

Convinced that women had to help themselves

and take responsibility for improving their situation,

they prepared the Declaration of Sentiments,

which included twelve resolutions. The participants

Declaration of Sentiments was used as a

foundational document for the women’s suffrage

First Woman to Run for President

In 1872, Victoria Woodhull, a women’s rights and

for president. She was the nominee of the Equal

Woodhull, a resident of New York, was unable to

vote for herself on Election Day, as at that time

the state restricted voting to men. However, as

she had been jailed a few days prior to Election

Day for a story she had published in her

inability to vote was of little consequence.

The State of Colorado pioneered women’s

participation in politics. Though the first

in 1877, Colorado became the second state to

Holly of Colorado were the first women elected

to a state legislature, the Colorado House of

Representatives. These women focused on

In 1916, Jeannette Rankin was the first

woman to be elected to the House of

Representatives. She was a Republican

supporter of women's suffrage who lobbied

Congress for the National American

Woman Suffrage Association. As a

suffrage amendment and focused on

In 1924, women’s involvement in American

both Democrats, succeeded their

husbands in office. Ross became the

governor of Wyoming in a special election,

after her husband died. Miriam Ferguson

after he was impeached.

In 1931, Hattie Wyatt Caraway was the first

woman to serve as a U.S. Senator for more

than a day. She was appointed after the

death of her husband Thaddeus H.

Caraway, an Arkansas Senator. After

was re-elected and served in the Senate

farm relief and flood control. She was also

II and the influence of lobbyists.

Frances Perkins was a well-educated and

engaging woman, who graduated from

Franklin D. Roosevelt appointed her as

Commissioner of Labor when he was

Governor of New York. Impressed by her work,

Roosevelt appointed Perkins as Secretary of

cabinet member, serving 12 years during the

back-to-work programs for the struggling

First Woman Elected to Both the House and

1940 when she succeeded her husband as a

member of the U.S. House of Representatives from

Maine. She served four terms in the House before

being elected to the Senate in 1948, where she

stayed for another 24 years.

In 1964, Smith became the first woman to run for

on the ballot in several states across the country,

including Illinois, where she received 25% of the

vote. She eventually lost the nomination to Senator

In 1964, Patsy Mink became the first woman of

elected to the U.S. House of Representatives. She

went on to serve for a total of twelve terms. Mink

is most well known for being one of the principal

authors of Title IX, as well as the first

also served as Assistant Secretary of State for

Oceans and International Environmental and

Chisholm successfully ran for Congress in 1969,

becoming the first black congresswoman, and

served as a Democratic representative for New

founding member of the Congressional Black

Chisholm went on to be the first woman of color

to run for the Democratic presidential

primaries and went all the way to the

Democratic National Convention where she

won 152 delegates, but lost to George

as an “outspoken politician who shattered racial

and gender barriers as she became a national

In 1968, Charlene Mitchell ran for president of

the United States as the candidate for the

Communist Party. Although only included on

the ballot in two states, Mitchell became the

Justice of the Supreme Court. Although her

nomination was originally opposed by pro-life and

religious groups, who worried she should not rule in

eventually confirmed by a 99-0 vote in the Senate.

While she was a conservative jurist, siding with the

conservative justices in the majority of cases before

her, many of her decisions were praised for being

both narrow and moderate. She retired in 2006.

who ran against incumbent Ronald Reagan.

Ferraro graduated with a degree in English from

from Fordham Law School in 1960. Before being

elected to Congress, Ferraro worked for the

In 1988, Ileana Ros-Lehtinen became the first

Latina and first Cuban-American to be

elected to Congress. She is currently the most

senior Republican woman in the U.S. House of

Representatives. Before becoming involved in

politics, Ros-Lehtinen was a teacher, having

graduated with a B.A. in education and M.A. in

International University, followed by a Ph.D. in

Higher Education from Miami University. In

Congress, Ros-Lehtinen served a term as the

chair of the Committee on Foreign Affairs.

First Woman of Color in the Senate

Carol Moseley-Braun was the first

African-American woman elected to the

and the first African-American Democratic

incumbent Alan Dixon in the state's

Though she lost her re-election bid in 1998,

Moseley-Braun continued a career in politics

as President Clinton's ambassador to New

Zealand, Samoa, the Cook Islands, and

Secretary of State. She was confirmed in January

the U.S. Ambassador to the United Nations from

Presidential Medal of Freedom by President

Albright Stonebridge Group, as a professor at

Service, and as a director on the board of the

First Woman Speaker of the House

In 2007, Nancy Pelosi was elected America's

first female speaker of the House of

Representatives. She first ran for office in 1987,

District. Pelosi is a strong supporter of health

In 2002, Pelosi was chosen as the Democratic

Leader of the House. She became the Speaker

of the House in 2008 when the Democrats took

Speaker of the House

vice presidential nominee in 2008. At the time of

her nomination, she was serving as Alaska’s

first female governor and had previously

served as Mayor of Wasilla. Since her vice

presidential bid, she has endorsed other

levels of office. Although she was considered a

potential candidate in the 2012 presidential

elections, she declined to run.

a Supreme Court justice in 2009 to replace

Sotomayor served as a district court judge in

New York and on the U.S. Court of Appeals for

the Second Circuit. She was born in the Bronx

to Puerto Rican parents. She was the third

woman and first Latinx justice to serve on the

Susana Martinez was elected Governor of

woman to serve as governor of a U.S. state

(Sila Calerdón had already served as

Nikki Haley was elected as the first woman

Governor of South Carolina in 2010. She is the

woman to serve as governor, and is also, at

the age of 41, the youngest current governor

in the nation. Prior to her governorship, Haley

was elected to the South Carolina House of

Representatives in 2004 after defeating Larry

Koon in the Republican primary, who was

then the longest-serving member of the

In 2012, Tammy Baldwin became the first

women to be elected to the U.S. Senate

from Wisconsin. She is also the first and

only openly gay U.S. Senator. Prior to her

election to the Senate, Baldwin had served

during her 14 year tenure in Congress.

woman elected to the U.S. Senate from Hawaii,

first Asian-American woman elected to the

and the nation’s first Buddhist Senator. Until

2016, Hirono was the only person of Asian

descent in the U.S. Senate. Before becoming

Senator, Hirono was a U.S. Congresswoman,

Democratic nominee for Governor of Hawaii,

Lieutenant Governor of Hawaii, and a member of

the Hawaii House of Representatives.

In 2012, Kyrsten Sinema became the first

and state representative, Sinema has

American Republican woman (and the first

Haitian-American) to be elected to the U.S.

House of Representatives when she defeated

Utah’s 4 congressional district and was elected

mayor of Saratoga Springs, UT and served on

the city council prior to her election to

one of the longest in US history, Loretta

Lynch was confirmed and sworn in as US

Attorney General. Lynch was the second

woman to win the nomination of a major party

for President of the United States. Prior to her

nomination came during her second run for

president. Clinton has the highest primary

delegate count of any woman who has run for

seat. Duckworth was injured by a rocket rocket

propelled grenade while fighting in the Iraq

War, losing both of her legs and damaging her

right arm. She is the first paraplegic to serve in

the U.S. Senate, and was the first disabled

woman to serve in the U.S. House of

Representatives. Duckworth is also the first

Asian-American senator from Illinois and the

to become Governor of Oregon. Brown is the

first openly bisexual governor in US history, and

her election win in 2016 made her the first

openly LGBTQ+ person elected as a US

served as Oregon’s Secretary of State for six

years and in the Oregon Legislative Assembly

of retiring Harry Reid to become a U.S.

Senator for the state of Nevada. Cortez

Congressman Joe Heck made her the first

female Senator from Nevada and the first

ever Latina in the U.S. Senate. Before

incumbent Bob Marshall to represent the

13th District of the Virginia House of

Delegates. Roem’s victory made her the

first openly transgender person to be

elected and serve in a U.S. state

legislature. Prior to serving in office, Roem

worked as a reporter and news editor.

the youngest woman elected to Congress

Jennifer Zielinski to represent the 5th District of

Minnesota in the United States House of

Representatives. Omar's victory made her the

first Somali-American in Congress and along

with Rashida Tlaib she is also one of the first

Muslim woman in Congress. Prior to serving in

Congress, Omar had served in the Minnesota

House of Representatives since 2016.

In 2018, Davids and Haaland became the first

person to represent Kansas in Congress.

Haaland, a member of the Ho-Chunk

woman to preside over the United States

House of Representatives on March 7th, 2019

during a debate on voting rights and

In 2018, Ayanna Pressley became the first

Massachusetts after defeating the 10-term

served as the first black woman on

1776 Women's Advocacy in the White House Abigail Adams was an outspoken women's advocate and the country's second First Lady. Adams played a double role as John Adams' wife and political adviser; Adams supported her husband in his career but never failed to express her convictions that women should have the same rights as men. Many of her ideas were ahead of her time: she opposed slavery, stressed the importance of education regardless of gender, and believed it the responsibility of the rich to support the poor. Her appeals for gender equality are recognized as some of the first demands for women’s equal rights. Abigail Adams First Lady and Women’s Advocate