'Pulp' was a music fanzine that was created by Bruce Milne and Clinton Walker in 1977, that split the focus between Melbourne and Brisbane. Copies were sold through punk/new wave import stores, which were springing up in each capital city around this time.

This is 'Pulp', Issue 5, created in 1978 but never completed or published.
Issue 5 was also meant to be released with a flexidisc by Melbourne punk band News.

This never-before-seen issue was recreated by 'Punk Journey' and Clinton Walker and is the first time in over 40 years that 'Pulp', Issue 5 has been released for public viewing.

There is also a great introduction from Walker himself, reflecting on the fanzine's creation and how 'Pulp' #5 has finally come to be published...

Brisbane to Melbourne, for a couple of reasons: one, to get out of

Brisbane, which after the departure of my mates the Saints in early ’77

had started to seem like a lost city, or empty city (even as it was

actually on the verge of exploding all over again); and two, to get

more closely involved in putting out Pulp, the fanzine that Bruce Milne

and me had launched as a sort of twin-city title during 1977.

What actually transpired, of course, was in one respect quite the

opposite: Pulp quickly folded. But since a reconstruction of the lost,

resurfaced in 2020, or at least what remains of it, I’ve been prompted

to reflect on the whole episode.

To see this reconstruction of the last Pulp, which is thanks to

(Fantastic Mess Records), and which was originally, ostensibly aimed at

coming out around the middle of ’78, was something that blew my mind

just a little bit. I was looking at what was most of the artworked

virtually totally forgotten about – and I thought it all looked quite

Of course, some remnants of Pulp #5 ended up in Inner City Sound

(ICS), and in fact, it was one of the seeds that drove the conception

of ICS in the first place, that here was this final issue of Pulp that

four issues of the zine, which obviously had fairly limited

distribution in their day, and put out a sort of best-of Pulp?

But then obviously that idea expanded during 1981, and rightfully,

to become what ICS is, which is a general sort of cut’n’paste

Pulp, plus reprints of articles from Roadrunner magazine, the new endeavour

that was part of what spelled Pulp’s end, plus reprints too of mainly

stuff I wrote for RAM magazine, Australia’s leading rock rag of the

day, which I started working for at the start of 1980 after I’d moved

Up until only recently when I saw the mooted reconstruction of

Pulp5 and got involved to help complete it, all I had was the above

memory of the genesis of Inner City Sound, and a memory of carting

together, pasting up, towards that ill-fated last issue.

Some of those pages, like the Radio Birdman interview headlined

“Radios Talk,” or Peter Nelson’s article on Crime and the City

Solution, ended up in ICS as straight reproductions, since that was

part of ICS’s agenda, to facsimilise stuff direct from its original

publication in fanzines. Some of the other stuff in ICS from Pulp5,

like a review by me of the Saints’ second album Eternally Yours, and a

feature I did on Suicide Records, were newly typeset and re-artworked

for the book, which was something else the book did, with Marjorie

Macintosh doing a fabulous job designing it all into an integrated

layouts were assembled; because that was how you did it in those days,

pasted the type and pictures down on artboards, Bainbridge Boards they

didn’t have them. I didn’t know what happened to them, eventually.

Well, now I know. They ended up, as did so much more history like

them, in the piles of stuff in the backroom at Au-Go-Go Records, the

shop that Bruce Milne opened in Melbourne in the mid-1980s.

It was most likely there that then-employee Scotti Henthorn

duties, and had the great prescience to photocopy them before they went

back in the piles thenceforth never to be seen again.

So, I’m just so grateful that Scotti had that archivist’s

prescience back when – and that Melynda von Wayward still has the

on-going passion for and dedication to documenting Australia’s punk

out into the world. It’s like the way they rebuilt the Beach Boys’

Smile! and I’m just so chuffed that someone, anyone, has enough

So what did actually happen back in Melbourne in 1978? Though it’s

still not easy to piece together all the thinking that took place, it

is possible to say that basically what happened to Pulp was -

I arrived in Melbourne towards the end of February, 1978, just

after the Pulp double-issue 3+4 had come out, and straight away Bruce

and I started working on a new issue. One of the big ideas Bruce had

for it was to include a flexidisc, by the band News, who as the Babeez

were probably Melbourne’s first punk-as-such band and one that Bruce,

short of actually managing them, had given a lot of assistance to,

including on putting out their debut single, “Dowanna Love,” at the end

one of the other reasons I’d moved there, it all just seemed so

early ’78 was managing the hottest new band in town, the Young

Charlatans. Whose number included my then housemate, Jeffrey Wegener,

Saints before they left for the UK and he headed south, as I would do

too. It was perhaps because Bruce was so busy looking after the

I took over from him on doing the artwork for Pulp. Bruce would readily

admit that graphic art is not one of his strong suits.

In March then, as the first issue of a new zine out of Adelaide,

Roadrunner, came out, Bruce and I continued working away on the new

issue of Pulp. I was laying out pages on the stuff we already in hand.

But we needed money to print it, after Bruce had already shelled out

the cash to press up the flexidisc that News had recorded, and that’s

why we decided to put on a benefit gig. The Pulp Benefit took place at

Tum) at the end of April ’78, and whether or not it was successful –

the night itself, surviving photos notwithstanding – it certainly

larger possibilities that Roadrunner presented, or that we felt it had

as it got out a couple more monthly issues, and that’s what really put

seemed to have so much greater grand ambition than we did. They were

talking about becoming a real rock magazine, like RAM, you know, on

newsprint, in newsagents, nationally-distributed, and with advertisers,

wanted to go, piggybacking on the impetus that these guys already had

but from their perspective too, joining forces to make for a stronger

team. I do remember going over to Adelaide a couple of times and

thinking, wow, what a flat, dull little place, it’s even worse than

Nevertheless, Bruce and I ditched Pulp, with its fifth issue still

incomplete on the artboards, and threw in our lot with Roadrunner.

Bruce even moved over there, briefly, to join the RR collective, which

broken up anyway, but by June he was already back in Melbourne,

disillusioned especially by Stuart Coupe jumping ship to take up an

But both Bruce and I remained mainstays on the Roadrunner

mast-head nonetheless, and after Donald got national distribution for

it in 1979, it became a vibrant player on a very vibrant Australian

music media scene on the turn into the 80s.

Adelaide that, a) we started doing the show together on 3RRR that,

known as Know Your Product, seemed to have had some impact too, and b)

Bruce started working at Missing Link Records and working towards

launching his own label Au-Go-Go Records.

The News flexidiscs that were intended to go into Pulp5, and which

contained the song “Sweet Dancer Au-Go-Go,” which was conceived as

stand as just one of the number of false-starts the label endured,

Glass put out in 1979 as a Babeez/News reissue called Dirty Secrets.

Following on from the first News single as such, “Dirty Lies,” which

the band put out themselves in ’78, Dirty Secrets contained a 7”

“Dowanna Love” and “Hate,” plus copies of the flexi. The release was

itself another false-start for Au-Go-Go if by any other name; the label

was finally launched later in ’79, with an EP by Two Way Garden. News

The Young Charlatans’ demise was seminal in its own right, with

going on to form Whirlywirld with former News-drummer John Murphy, and

As for me, I kept stringing for Roadrunner, and Semper in

Brisbane, until the end of 1979 when I moved to Sydney and almost

contributing stuff to RAM, Rolling Stone and the Adelaide Advertiser:

My real baptism of fire as a writer.

Pulp5, and soon enough they would feed directly into the conception and

execution of Inner City Sound, and that seems, or seemed then, as

fitting an end for them as any.

Yet now they’re back again! and in as full as they can be, as

follows. I can’t remember if there were any more pages I’d artworked

that have been totally lost, but I do remember it was an unfinished

so impressed to see it again now after all this time. I like the

critical tack it takes, and I love the way it looks. There’s nothing

emerged. It’s just another indication of how far ahead of the global

pack that so much that went on here in Australia was. And sad that that

headway was so soon lost.

News put together a Pulp benefit at Bernhardts on 30th April, 1978.

It was a six hour spectacular including News, Young Charlatans,

Clinton Walker at the typewriter — Photo by Philip Morland. 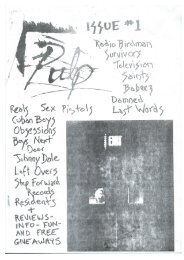