ship for the failedÂ Planet of the TitansÂ reboot, no detail is missed when it comes to the originalÂ

EnterpriseÂ designs.â€• â€“ Trek Core â€œNo ship is too abstract for Ben Robinson and his

Eaglemoss team, who do an excellent job of breaking down each ship design with creative notes

and interviews with the designers throughout. Each article reveals something you didnâ€t know

about the creative process in one ship after another.â€• - Trek Core From the Inside Flap

profiles Starfleet ships from the birth of theÂ Federation to the launch of theÂ U.S.S. EnterpriseÂ

NCC-1701-B and the death of Captain Kirk. ItÂ also includes a chapter on Earthâ€s pre-

FederationÂ vessels, including Zefram Cochraneâ€s ship theÂ Phoenix,Â which made

mankindâ€s first faster-than-Â light journey. Plus all of the Starfleet ships fromÂ the first season

models that were used on the TVÂ shows and movies. Read more Ben Robinson is best known as

the man behind Eaglemoss's Official Star Trek Starships collection, which in the last three years

has become the largest and best-regarded collections of model Star Trek ships ever produced. He

has been involved with Star Trek for 20 years. Ben was the launch editor of the hugely succesful

Star Trek Fact Files reference work, which sold over 50 million units. Then he went on to edit the

Manuals, the first featuring all seven Enterprises, and the second focusing on the Klingon Bird-of-

Prey. Ben is particularly passionate about the writing, design, and visual effects behind the series.

figures in the history of Star Trek from Dorothy Fontana and Matt Jefferies to Michael Piller, Ira 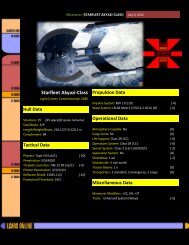