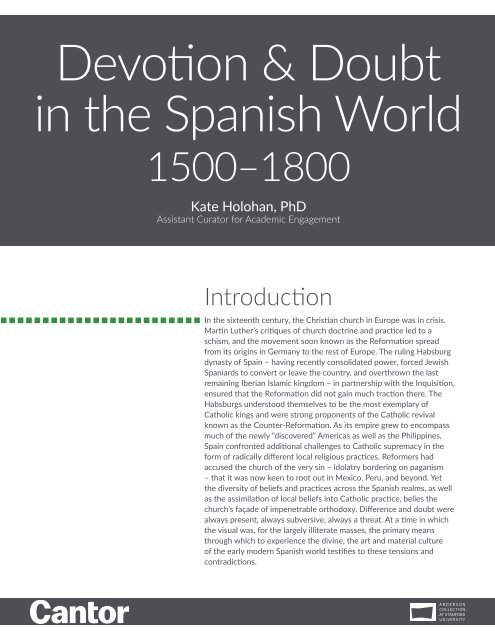 In the sixteenth century, the Habsburgs understood themselves to be the most exemplary of Catholic kings and were strong proponents of the Catholic revival known as the Counter-Reformation. As its empire grew to encompass much of the newly “discovered” Americas as well as the Philippines, Spain confronted additional challenges to Catholic supremacy in the form of radically different local religious practices. Reformers had accused the church of the very sin – idolatry bordering on paganism – that it was now keen to root out in Mexico, Peru, and beyond. Yet the diversity of beliefs and practices across the Spanish realms, as well as the assimilation of local beliefs into Catholic practice, belies the church’s façade of impenetrable orthodoxy. Difference and doubt were always present, always subversive, always a threat. At a time in which the visual was, for the largely illiterate masses, the primary means through which to experience the divine, the art and material culture of the early modern Spanish world testifies to these tensions and contradictions.
- Kate Holohan, PhD
Assistant Curator for Academic Engagement

in the Spanish World

In the sixteenth century, the Christian church in Europe was in crisis.

schism, and the movement soon known as the Reformation spread

from its origins in Germany to the rest of Europe. The ruling Habsburg

Spaniards to convert or leave the country, and overthrown the last

remaining Iberian Islamic kingdom – in partnership with the Inquisition,

ensured that the Reformation did not gain much traction there. The

Habsburgs understood themselves to be the most exemplary of

Catholic kings and were strong proponents of the Catholic revival

known as the Counter-Reformation. As its empire grew to encompass

much of the newly “discovered” Americas as well as the Philippines,

Spain confronted additional challenges to Catholic supremacy in the

accused the church of the very sin – idolatry bordering on paganism

– that it was now keen to root out in Mexico, Peru, and beyond. Yet

the diversity of beliefs and practices across the Spanish realms, as well

as the assimilation of local beliefs into Catholic practice, belies the

church’s façade of impenetrable orthodoxy. Difference and doubt were

always present, always subversive, always a threat. At a time in which

the visual was, for the largely illiterate masses, the primary means

through which to experience the divine, the art and material culture

of the early modern Spanish world testifies to these tensions and

■ ■ ■ 2. The tearful St. Peter, expressing penitence for his

denial of Christ on the night of his arrest, was a popular

theme across southern Europe in the early modern

period. The image of the repentant Peter embodied

the emotional gravitas that the Counter-Reformatory

church advocated. The writings of the Spanish Ignatius of

Loyola and others responded to reformers’ criticism that

the church had become a corrupt machine for granting

spiritual privileges to the wealthy. They embraced a

an intense empathy with the suffering of Christ and the

saints. In contemplating the life of Christ, the faithful

were thought to better discern the will of God. Peter’s

made of glass, that streamed down the sculpted visages of

like Pedro de Mena. The saint’s tears are meant to move

the faithful to their own tears – tears for their personal

sorrows but also for the suffering and sacrifice of their

spiritual betters. If Peter, the rock of the church and the

keeper of the keys to heaven (both of which the painter

alludes to in this painting), can descend to the depths of

depravity yet shed tears of remorse, why can’t you?

Philip II, was a relic fanatic, amassing thousands of them

from across Europe and housing them in richly decorated

in the metaphysical power of relics. At the end of his life, he

of transformation and relief. We know very little about the

the figures’ uneven eyes and ears – they may have been

mass produced in a workshop in northern or central Spain.

Designed to display a physical remnant of the saints they

depict – a piece of bone, perhaps, or a torn bit of a robe – the

relics themselves are long gone. Santa Emerenciana and Santa

Juliana of Nicomedia, the subjects of the Cantor’s reliquaries,

were both early Christian martyrs, a macabre status that would

have conferred prestige and pedigree to the owners of their

relics. Perhaps the most intriguing aspect of the two busts is

the inscriptions. Though difficult to parse grammatically, they

suggest that they were sculpted by – or, more precisely, under

the patronage of – a Doña Bernardina and a Señora Abadesa

(abbess). They point to a networked economy of female

devotees and patrons who found solace, and perhaps models in

faith, in their martyred forebears.

■ ■ ■ 1. In the Counter-Reformatory Spanish world, the

saints maintained a primacy that they were denied in

de Ribera, who spent most of his artistic career in Spanish

Naples, depicts St. Jerome interrupted at his writing by an

angel announcing the Last Judgement with a blast from his

trumpet. The drama of the scene is conveyed not just by

Jerome’s startled face and gesture, but by the diagonal lines

that sweep across the center of the image, echoing the angle

of the saint’s body and creating a sense of supernatural

movement. Ribera counterbalances the godly with the

earthiness of Jerome’s sinewy musculature and the puffedout

cheeks of the heavenly trumpeter, who looks more like a

young boy blowing raspberries than the avant-garde of the

is our universal fate, the saints no less than you!”

later-seventeenth-century Seville, created this print as part of

the festivities surrounding the canonization of King Ferdinand

III in 1671. He shows us the ephemeral decorations, in the

form of a triumphal arch, erected on the interior of the main

entrance of Seville Cathedral, opposite the grand, free-standing

Triunfo (Triumph) that was the centerpiece of the canonization

festivities. The human figures in the foreground are dwarfed by

the ephemeral architecture as well as the larger machinations

of ecclesiastical and earthly power. Ferdinand, who ruled

in the thirteenth century, was a key figure in the so-called

formerly Islamic Andalusia back into the religious (and political)

sphere of Christendom. Upon his death in 1252, Ferdinand was

entombed in Seville Cathedral, which itself had only recently

been converted from a mosque to a church; the church’s

bell tower, known as La Giralda, is the minaret of the former

mosque. The story of the Reconquest lies at the geographical

and metaphorical heart of Seville. Although the last Islamic

canonization, Islam was an ever-present specter. It remained a

goad to modern Spain’s evangelizing mission in the Americas

Catholic church’s – power in an era of reformation, economic

■ ■ ■ 5. Scholars have long thought that the stone faces

from Teotihuacan were made for burials. However, recent

research suggests otherwise: they may instead have been

used in everyday rituals and devotional practices. While many

of these faces were looted over the past several hundred

years, both Teotihuacan and Olmec faces have also been

found in archaeological excavations of the Templo Mayor,

the main temple of the Mexica (better known as the Aztecs)

the Aztec empire attest that its rulers purposely buried

align themselves spiritually and politically with their ancient

and peninsulares, the faces were considered neither ancient

religious objects nor testaments to imperial Aztec power; they

were, instead, pagan idols and thus had to be either destroyed

or assimilated. For many Mesoamerican green stone objects,

the latter was the preference. The Spanish believed that jade

and other precious green stones were efficacious in curing

objects into systems of Spanish medicine neutralized their

that of the very Catholic Philip II.

to Texas, where in 1720 he founded the mission of San José y San

Miguel de Aguayo in San Antonio. Known for his humility, he was said

to have referred to himself as “Nothingness Itself”; the friar’s simple

work on the indigenous populations he sought to evangelize).

Somewhat ironically, his renown as an evangelizer and his seeming lack

of guile made him the object of considerable interest and devotion,

as this image attests. The painting’s support is unusual: it consists of

an etching affixed to a canvas and then painted over. In painting over

the print, the artist has, in effect, repainted the original image of the

missionary, which is now at the Museo de Guadalupe in Zacatecas. The

verdadero retrato (true portrait). By way of its veracity, the image retains

some of the friar’s own holiness. A second inscription at the bottom left

the devotional nature of the reproductive act. The making of this

■ ■ ■ 6. By the sixteenth century, Spanish royal and clerical

support of the doctrine that the Virgin Mary was immaculate

(i.e., conceived free from any taint of sin) was not solely a matter

of Counter-Reformatory devotional zeal. It was also a means

by which to assert imperial military and political power and to

evangelize the indigenous peoples of the Americas. The Holy

Roman Emperor Charles V had images of the Immaculate Virgin

engraved on his armor. Hernán Cortés, who invaded Mexico

and defeated the ruling Aztecs at Tenochtitlan in 1521, had a

battle standard on which her image was displayed. Sculpted in

wood, painted, gilded, and rather diminutive in size, the Cantor’s

sculpture resembles images of the Virgin of Quito (Ecuador),

who was a variation of the Virgin of the Immaculate Conception.

Like the Quiteño examples at the Metropolitan Museum of Art

gazes down to the right while gesturing to the upper left, wears

a dress of white and gold and a blue mantle lined in red, and

was likely a snake or dragon. The abundant depictions of the

Virgin of the Immaculate Conception found in the Americas

Spanish crown. In 1799, at the same time that he was promoted

working in a more critical mode. The Cantor’s work belongs to

Caprichos. This body of work confronts, often satirically, the

society. In many of the Caprichos, Goya skewers 9the ruling class

and the clergy, yet is careful to cloak his critiques in ambiguity

and allegory. In the Cantor’s print, two hooded male figures,

their faces obscured by shadow, are carrying off a woman in

distress. Her head is thrown back, hair loose, eyes screwed

shut, and mouth open in fear or agony – we can only imagine

her curdling scream. Though Goya refuses to provide explicit

identifying features, the male figure on the left, shrouded in a

long cloak, appears to be a cleric. We are left to contemplate the

horrors in which he – and by implication the entire institution

of the Church – is not merely complicit, but actively enabling:

of many of the Caprichos drew the attention of the Inquisition.

Presumably under the threat of further harassment, Goya

removed them from sale soon after their publication.

Pérez Sánchez, Alfonso E., and Eleanor A. Sayre. Goya and the Spirit of Enlightenment. 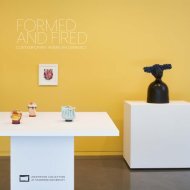 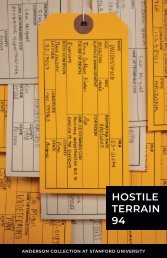 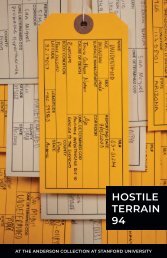 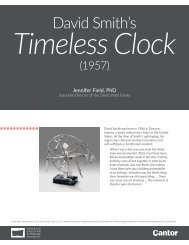 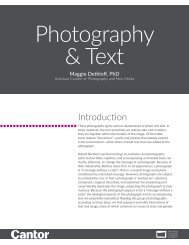 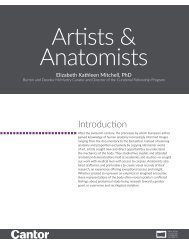 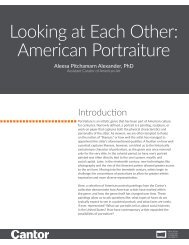 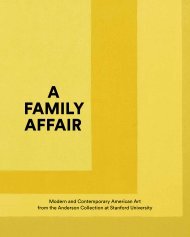 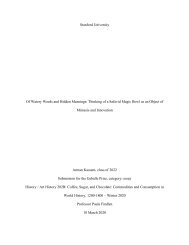 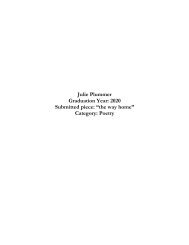 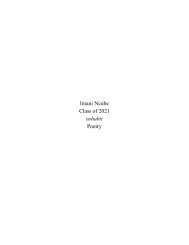 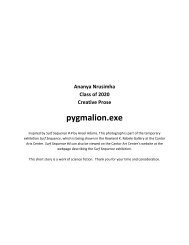 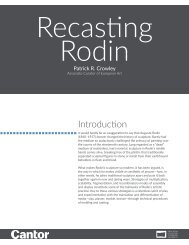 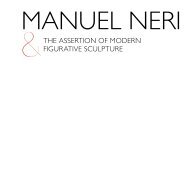 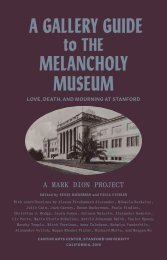 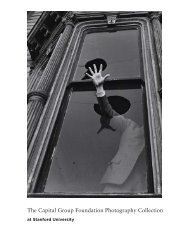 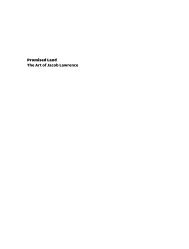 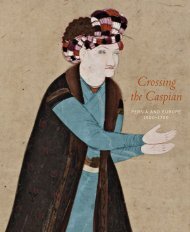 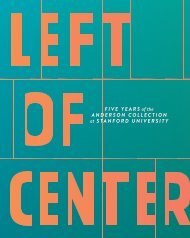