Mountain Bounty is the oldest and largest

farm operation in the Sierra. It was started

farming since the early 1990s.

Bounty is on the San Juan Ridge, not far

from Nevada City. Eighteen acres are

currently under cultivation. The rest of the

land is forest and meadows.

Utilizing organic practices, they make use

A crew of 16 includes several interns who

work from April to November, the main

to start their own farms, or work on other

farms. Some stay at Mountain Bounty.

The farm is firmly committed to

focusing on providing a local source

of quality produce while working on

To this end, Mountain Bounty offers the

of seasonal vegetables, fruit and flowers.

They also have wholesale customers, such

and several local restaurants. And, they

can be found Saturdays at the Nevada City

Faced with the expiration of the lease on the major

portion of its farm land, which could not be renewed

as the owner wanted to sell the land, Mountain Bounty

Co-op to create a fund to purchase and preserve area

farmland. Their first endeavor is the purchase of land

Local AgricultureFeeding the CountyMountain Bounty is the oldest and largestCSA (Community Supported Agriculture)farm operation in the Sierra. It was startedin 1997 by John Tecklin, who has beenfarming since the early 1990s.A 50-acre organic family farm, MountainBounty is on the San Juan Ridge, not farfrom Nevada City. Eighteen acres arecurrently under cultivation. The rest of theland is forest and meadows.Utilizing organic practices, they make useof cover crops, compost and organic soilamendments to grow 40 different cropsand 140 varieties.A crew of 16 includes several interns whowork from April to November, the maingrowing season. These interns often go onto start their own farms, or work on otherfarms. Some stay at Mountain Bounty.The farm is firmly committed toCommunity Supported Agriculture,focusing on providing a local sourceof quality produce while working oneconomic sustainability for local farmers.To this end, Mountain Bounty offers thepublic a CSA program that provides boxesof seasonal vegetables, fruit and flowers.They also have wholesale customers, suchas Briar Patch Co-op, California Organicsand several local restaurants. And, theycan be found Saturdays at the Nevada CityFarmers Market.Information: mountainbountyfarm.com(530) 292-3776Community SupportFaced with the expiration of the lease on the majorportion of its farm land, which could not be renewedas the owner wanted to sell the land, Mountain Bountyreached out.Enter Forever Farms, a collaborative campaign launchedby Bear Yuba Land Trust, Sierra Harvest and BriarPatchCo-op to create a fund to purchase and preserve areafarmland. Their first endeavor is the purchase of landleased by Mountain Bounty. Learn More: bylt.org,sierraharvest.org, briarpatch.coopGOLD | LIVINGNEVADACOUNTYGOLD.com | 129 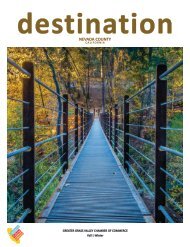