Read Directorate S: The C.I.A. and America's Secret Wars in Afghanistan and

masterpiece...Coll succeeds on all levels...Coll is masterful at plumbing the depths of agencies

and sects within both Afghanistan and Pakistan...In this era of fake news, Coll remains above it all,

evenhanded approach, gift for limning character, and dazzling reporting skills, he has created an

to date on the U.S. war in Afghanistanâ€¦Collâ€s vital work provides a factual and analytical

foundation for all future work on the Afghan War and U.S. policy in Central Asia.â€•â€”Â

Publisherâ€s Weekly (starred)â€œSpellbinding. . . It does for America in Afghanistan what

Michael Gordon and Tom Ricks did for the Iraq misadventure in Cobra II and Fiasco.â€•â€”

CIA and Americaâ€s secret wars in Afghanistan and Pakistan . . . In the pages ofÂ Directorate

S, the sequel to Collâ€s Pulitzer prize-winningÂ Ghost Wars, the story is delivered with a literary

war. The dance of blame, with the US swaying at one moment towards Pakistan and the next

towards Afghanistan, is a choreography familiar to CIA chiefs, US presidents and writers who have

tackled the subject. Coll refuses to follow this tired tune, and the result is masterful.â€•â€”

Wars. Both books rest on a foundation of serious scholarship and Collâ€s extraordinary access,

to individual CIA officers mostly, but also to many others. These notably included members of

Pakistanâ€s Inter-Services Intelligence (ISI) agency, where Directorate S was the name given to

the branch of the agency â€œdevoted to secret operations in support of the Taliban, Kashmiri

guerrillas, and other violent Islamic radicalsâ€•. Every assertion is carefully sourced and checked.

This book is in the finest traditions of American investigative journalism. Coll is the thinking

decades of experience in South Asia, nearly 600 interviews over a decade, and thousands of

unraveling of U.S. policy in Afghanistan. Few writers can match Collâ€s length of time on the

topic, range of contacts, or personal knowledge of realities on the groundâ€¦ it is hard to imagine a

more complete and thoughtful account of how the United States went wrong in Afghanistan.â€• 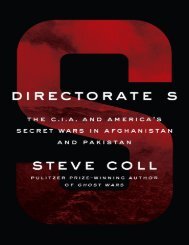