For latest jobs & news check out M&IT on the Internet www.meetpie.com

The subject matter was

the last bastion of

here can be few conference

homophobia’ as the single

And with Britain’s reputation

as a socially tolerant society,

it was a factor Jean Collingwood, chief

executive of the Ingenious Group, hadn’t

anticipated when putting together The Pink

Pound conference, a marketeer’s guide to

understanding and attracting the gay consumer.

“It’s an emotive subject and still such

a taboo - we would have liked to think that

people have got over it,” she says.

“It appeared this subject matter was the last

Hilton and BT, both highly experienced in

in the knowledge that it sells products

and creates an inclusive brand offering with

their staff and customer base.”

Even marketing the event itself - producing

the single fuchsia-pink pound coin which

appeared on the conference’s promotional literature

“One of the first challenges was going to the

Royal Mint to gain permission to reproduce a

pink coin in all our marketing material,”

Collingwood explains. “This hinged on discussions

on whether it met the Royal Mint’s

criteria. Firstly in the very British matter of

‘being of good taste’ and secondly, whether it

was a true likeness of the Queen. It was put to

finds out how The

us that the Queen was not pink - but we

enjoyed some light hearted discussion in

pointing out that the Queen wasn’t actually

But exactly how do you start putting

together a programme surrounded by so much

controversy and sensitivity? And convince the

community involved of the sincerity of your

backgrounds and the company is independent

of shareholders or mass marketed

The Pink Pound - The marketeers guide to understanding and

engage with gay consumers, a market segment worth an

estimated £70 billion in the UK.

160 marketers from some of the UK biggest companies from

alcohol, IT, travel, hotel and leisure sectors plus academics and

For latest jobs & news check out M&IT on the Internet www.meetpie.com

“From being the darlings of ‘Marketing for

Good,’ this was quite a big departure for us -

a debate as social marketeers who deliver,

through conferences, a subject matter we

wanted to lead in,” says Collingwood.

“We took a strong position from the onset

that we were not experts in gay consumer

marketing, but experts in seeking out the truth

and answering the real questions marketeers

researching the subject matter - from political

correctness and previous discussion on the

subject, to exploring the market worldwide.

The organisers spoke to a number of advertisers

from New York, Los Angeles and

Australia who gave help and support.

“We engaged the gay community from the

Speaking out: Presenters came from companies

including BT, Hilton and Egg

with trusted thought leaders and representatives

from Stonewall, Out Now Consulting,

understood our sincerity in not only exploring,

but improving marketing progress in this area,

we played a leading role in not just reporting

but shaping critical debate. This was carried

out on several fronts firstly through a series of

including the BBC and CNN,” explains

Discussions centred on aligning the subject

matter with new legislation to be introduced

the month after the conference, outlawing the

discrimination of goods, services and marketing

From the outset, delegates were encouraged

to shape their own agenda. Feedback gained

and viewpoints were put to the marketing

community to see if they agreed, disagreed or

results and emerging viewpoints were posted

responses shaped the contents of the final programme,

creating a learning experience based

on current thinking rather than perceptions.

The interactive nature of the planning process

resulted in what Collingwood calls a “100 per

“We took the view that our approach should

be ‘How would we explain this issue if we

were talking to someone from Mars? Let’s

think about the key issues of the marketeer of

toilet rolls in Bradford, who wants a fast track

view of how to include and promote their

product to gay consumers.’ What we wanted

was for someone to get to grips with every single

issue involved in marketing to this group.”

But there were widespread difficulties

ahead - Ingenious ran into many brick walls

seeking out and convincing speakers to

address the conference, even those known to

be advanced in marketing to this consumer

target group. “Companies were unwilling to

them this was not about gay issues.

Everyone we spoke to felt the need to define

their own sexual preferences which usually

began with ‘Well I am not gay myself of

course,’ ‘I know a gay person’ or ‘I am married

Collingwood adds some of those contacted

didn’t know how to respond to their requests,

Everyone we spoke to

felt the need to define

‘Well I am not gay

citing a leading car manufacturer with a ‘customer

insight team’ of 22 staff dedicated to

consumer marketing as an example:

the marketing director’s assistant called us to

say ‘We don’t do marketing to gays.’ When

asked, if given at least 3 million people in the

UK are gay, did they not consider any of these

Language used to make the presentations

was a major concern for speakers from the

mainstream marketing community. They were

asked to use language used in their workplace

to create a true and honest picture of gay consumer

marketing in the UK. However it was

still a cause for concern for some.

skills, some speakers were petrified

We addressed this by providing full

copies of all research and articles used in the

lead up to the programme. This featured language

endorsed by the gay community and

microphones were used during the conference.

The Pink Pound was also the first event

in the UK to use US Mediasite Technology -

speakers were fully sychronised in a split

screen with their presentations. “This protected

and sensitive subject with the truth about

what was said when, why and by whom,”

explains Collingwood. “Due to the homophobic

nature of the subject matter it equally

became an important marketing and learning

tool for delegates to take back to the office to

their more unenlightened and less adventurous

aimed at marketing to an affluent audience

of wealthy pensioners or the youth market.

But, even so, Collingwood says there was

some embarrassment on the part of the delegates

with many booking in secret. But

despite the issues and challenges, the Pink

from world leading brands. “We got

through the day without any major boo-boos

and achieved our objectives of creating open,

honest debate, keeping it real and moving on a

marketing society that had never had the platform

to discuss, examine or challenge behaviour

in the overuse of inappropriate, outdated,

Network success: organisers had a job to get

Collingwood knew the objectives had been

achieved, when they were faced with a rare

problem for conference organisers. “We

couldn’t get people to go home,” she laughs.

“There was a drinks reception afterwards and

people were buzzing. It was very unusual.

There were many who felt uneasy about the

how crucial to the market these customers

“From an organiser’s point of view it was

well worth doing, we succeeded in moving

from the darlings of the corporate and charity

world into proving we can handle more high

risk, edgy content - we are going to be the

most talked about people for a long time! The

gay community embraced what we were trying

to do, not just as a conference organiser

trying to do something controversial, but our

commitment to the truth.” 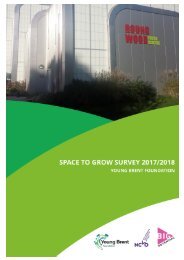 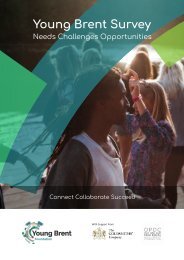 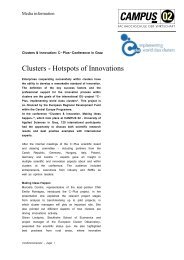