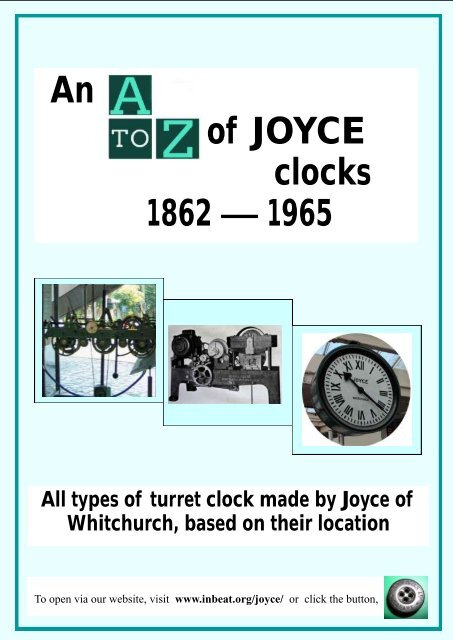 All types of turret clock made by Joyce of

Whitchurch, based on their location

escapement was installed at Ascot in 1896. It was auto-wound

with a single motor in 1962, which the units above replaced in

sold. It is now at The Bell Tower, Swan River, Perth, W Australia,

This clock was made under licence from George Bennett Bowel the patentee. It combined

electrical and mechanical operation and was designed to be very accurate. It had a double three

legged gravity escapement, which, unusually had no fly. Most of the production was exported to

Canada, but two were installed in the UK, only one of which has survived. This however has had

The single train clock with pinwheel escapement is housed in the

green cupboard seen in the top picture left. The clock is fitted

with an extra wheel which reduces the need for a tall weight drop.

For a number of years the movement, dial and hands were lost

after being replaced with an electric movement, but by a miracle

were found again and reinstalled.

St Mary’s, Dudleston has a two train clock with a small single four legged gravity escapement. It was

legged gravity escapement clocks were made in large numbers in single, two and three train versions,

This clock had been superseded by an electric clock when we visited a few years ago. The Joyce

clock had been kept safely in its cupboard and so remained in original condition.

This church is a rare example of an Anglo-Saxon

building dating back to the late tenth century.

Below: a close up of the escapement.

As the plaque below shows, the clock was gifted to the church by Emma Barnston on the day of

her marriage. Her family had a long history in Cheshire and were significant landowners in the

area around Farndon. Their home, Crewe Hall was in the hamlet of Crewe-by-Farndon. The

This was the last large three train, full quarter chiming clock made by JB Joyce & Co. Ltd. It was

made by Tom Briscoe, uncle of Paul Fraser. It has a pinwheel escapement, although a double

three legged gravity option would have been available.

This clock was made in 1880. The cast iron tower

was originally located almost adjacent to the harbour,

as seen in the photo at the bottom of the page. The

railway platforms were just out of shot to the left.

At some time in the mid to late 20th century, the

clock was removed and discarded outdoors in a

remote part of the site. 1990 brought a re-modelling

of the station and harbour complex and the tower

and clock were repaired and re-sited on the station

approach. The position on a mini-roundabout meant

that its former configuration had to be altered. What

had been a meteorological panel became the

entrance door for access to the clock (seen right) as

the old door could no longer be used as ladder

weight drop remains hand wound and is cared for by

perpendicular style which dates back to the 14th century. Despite its small size, the church has a

was the first clock to be auto-wound by the company - the design was by Paul Fraser. When the

have had it built into the rostrum where it is hand wound and on view to visitors.

The church has one of the last

clocks with a single four legged

gravity escapements to be made. We

although there were a few where the

When photographed this clock was

‘resting’ awaiting a visit to Joyce’s

later; it lacks the decorative cut out detail seen on all the later pinwheel supports. Both clock

and dial were in beautiful condition when we visited. This small village has border-hopped

and is now in Denbighshire.

on the side of the Macclesfield Canal.. This building, which houses this clock is almost adjacent to

the Hovis livery and were also serviced on site. Since the company left, the building has had several

owners. The clock is a pinwheel timepiece with only a six foot weight drop.

Records are scanty, but it is believed there were two clocks in the church dating back to 1661 and

gravity escapement.. A plaque on the clock records that it was supplied by John Palin of Nantwich

and set going at Easter 1892. A brief look at the 1891 census on Ancestry revealed that JP was a

was converted by Smith of Derby to be driven by electric motors, so its original escapement had

been removed. Its date suggests that it was probably a double three legged gravity from the

outset, but we have found nothing to confirm this. A third motor drove the traditional ‘curfew

GMT, 9pm Oxford time), to warn students the college gates are about to be closed for the night.

This heavy frame style was used when clocks had to strike on very large bells (as at Worcester).

developing many of the railways in Wales and the border counties. The beautiful country house

is now a hotel. The clock is ting tang chiming, with a single four legged gravity escapement which

drives four dials. It has been fitted with a night silencing unit for the benefit of light sleeping

(We haven’t visited yet!)

This church has been on our list for a visit for a very long time. It has a Joyce clock which is

believed to date from c. 1873 so it will most likely be a two or three train clock with a single four

legged escapement. A person named Miss Carr gifted the clock to the church in memory of a

(This clock is outside of our date range, but was too individual to miss)

Thomas Joyce in the 1850s. It was made during the same year as the last of the double frame

clock was made (for the Savings Bank, Chester). None of the other experimental pinwheels

resembles this one. When we visited, the clock was not operational but it appeared to be complete.

escapement clocks which James Joyce made after the death of Thomas Joyce in 1861. Several were

made including those for churches at Overton-on-Dee, Wrockwardine Wood, Menai Bridge,

Montford and Milton Malsor. The last were made in 1863, which was the year when the first four

We believe this two train clock in St Chad’s, Tushingham and one of the same date in the stable

block of a country house were the first single four legged gravity escapement clocks to be made.

potential problems with the new escapement. This format proved very successful and was used

on single, two and three train clocks, large and small, for twenty years, until superseded by the

was awaiting refurbishment for

display when we visited. It was

made for Canon Richard Cattley

for his home where it drove one

dial on the exterior for public

view and two inside, one of which

had a specially made dial by the

In his will the Canon left the

clock to the Victoria Institute

which is now a museum and art

A plaque in the clock case records it was made by James and John Barnet Joyce in 1869. The clock

escapement. It is the earliest clock with this feature as this format was not routinely used by

Joyce’s for another twenty years. It drives a slave dial in the ringing chamber and another in the

North Transept, but, like many cathedrals, there was never an external dial.

(Like Ruthin Castle this clock is also outside our

time-frame but could not be missed.)

The clock at St Deiniol’s, Hawarden is one of a small group of experimental pinwheels made by

Joyce’s in the 1850s. We have not seen another of this same design, but other trial examples were

(or Flint, Flintshire in English)

It drives just one dial.

It is not known whether

there was an earlier clock in

this old church tower, but

gifted to the church by Mary

Ellen and Fanny Jones as a

memorial to their family.

This clock was the first to be

made by Joyce’s which was

from the outset at the

request of the two ladies. It

has a pinwheel escapement

based on the one designed

by Paul Fraser and trialled on

the factory clock in

This clock was the last clock

to be made by Joyce’s at the

was bought by Smith of

Derby and from then on the

role of the Whitchurch work

-force was to repair and

service the clocks in their

area and to work on heritage

WHITCHGURCH Clockmakers 1690-1965. There is also the family genealogy and

histories of each of the family’s clockmakers and of the company. The major part of the

book is a photographic record of over 150 of their turret clocks; our aim was to

photograph examples of each of the different models made by the company, but not all,

as we would have had to visit between one and two thousand clocks! (The exact number

To buy the book at the discounted price, email us on steveanddarlah@inbeat.org

Tell us you have read the booklet, and we will send you payment details.

To see sample pages of the book visit www.inbeat.org/joyce/ 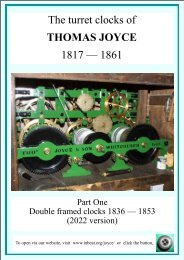 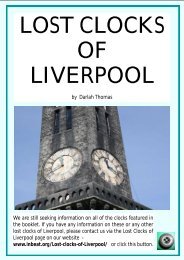 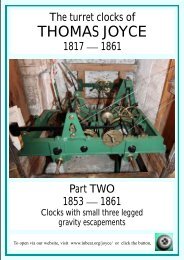 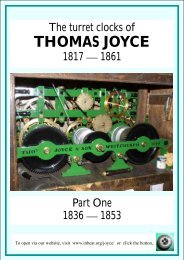 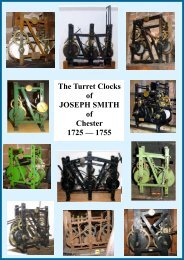