Flew Over the Cuckoo's

Praise for One Flew Over the Cuckoo's Nestâ€œA work of genuine literary merit...What Mr. Kesey has

warm story about the nature of human good and evil...Keysey has made his book a roar of protest against

middlebrow society's Rules and the invisible Rulers who enforce them.â€•â€”Timeâ€œThe final triumph of

these men at the cost of a terrifying sacrifice should send chills down any reader's back....This novel's scenes

characters are original and real....This is a tirade against the increasing controls over man and his mind, yet

the author never gets on a soap box. Nor does he forget that there is a thin line between tragedy and

from the University of Oregon and later studied at Stanford with Wallace Stegner, Malcolm Cowley,

Richard Scowcroft, and Frank O' Connor. One Flew Over the Cuckoo's Nest, his first novel, was published

in 1962. His second novel, Sometimes a Great Notion, followed in 1964. His other books include Kesey's

Round (with Ken Babbs). His two children's books are Little Tricker the Squirrel Meets Big Double the Bear

and The Sea Lion. Read more 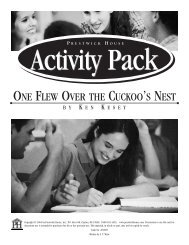