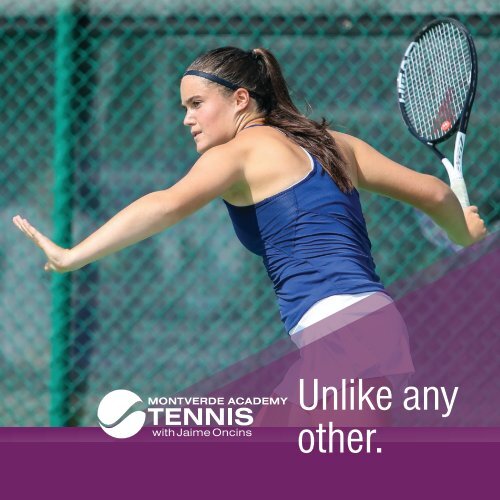 Propel your tennis skills at MAT. Coached by professionals including Jaime Oncins, a native of São Paulo Brazil. With more than 14 years of coaching experience, he has worked with top players such as Flavio Saretta and Andre Sa and is currently training professional player Gastao Elias of Portugual.

Propel your tennis skills at MAT. Coached by professionals including Jaime Oncins, a native of São Paulo Brazil. With more than 14 years of coaching experience, he has worked with top players such as Flavio Saretta and Andre Sa and is currently training professional player Gastao Elias of Portugual.

knowledge, character, and community. Our teams have earned notable distinctions that include 16 National Championship

titles and more than 45 student-athletes are playing professionally. We offer 22 varsity sports programs, and elite programs for

States and internationally to take their skills and talent to the next level.

This advanced program for grades 6-12 and post-graduate studies

compete in the United States Tennis Association (USTA) and the

- 15+ commitments for collegiate levels including the

Division I, II, and III

The idea of Montverde Academy Tennis

is to provide a setting where studentathletes

can unite both rigorous academic

performance at a high school level. This

Learn from the best with our world-class coaching and training staff. Led by Program Director

and Head Coach, Jaime Oncins, a native of São Paulo, Brazil, with more than 15 years of

experience coaching juniors and professional players. He has worked with top players such as

Flavio Saretta, Andre Sa and Gastao Elias. Oncins began his tennis career at the age of six and

became a professional at 18. His credentials include:

- Quarterfinalist in Barcelona Olympic Games - defeated Michael Chang ( No. 2 in the world)

- Competed in Davis Cup for 11 years

- Qualified for the ATP Doubles Masters

- Doubles Semifinalist in the French Open 2000

Montverde Academy Tennis allowed me to

meet people from all around the world and

encounter many different cultures while

playing the sport I love. It gave me the chance

to build relationships that will last forever. My

teammates and coaches became a second

family to me that I can always count on.

The Strength and Conditioning Program at Montverde Academy Tennis goes well beyond the weight room.

needs as well as provide performance testing to know how to best prepare them for their sport.

well as long, healthy athletic careers through training and education.

Montverde Academy offers continuous enrollment. We admit students of any race, color, national, and ethnic origin to all

the rights, privileges, programs, and activities made available to students at the Academy. Montverde Academy does not

discriminate on the basis of disability, race, national, and ethnic origin in the administration of its educational policies,

- For a list of required documents by grade and/or student type visit:

- International applicants grades 6-10 must submit one of the following: