Laverne Cox is and American actress and LGBT+

advocate. She is most well known for her performance in

‘Orange is the New Black’ and becoming the first openly

transgender person to be nominated for a Primetime

Emmy Award in any acting category. She has been noted

for being a trailblazer for the transgender community,

with her prominence in the media leading to growing

word with myself and say 'you can fall in love with

to be, you can run towards yourself if you like,

because it's going to be fine.”

Jackie Kay is a Scottish poet, playwright and novelist known

for her works ‘Other Lovers’, ‘Trumpet’, and ‘Red Dust Road’. She

has won a number of prizes for her work. Jackie was born to a

Scottish mother and Nigerian father in Edinburgh, and was

adopted as a baby. She has been open about being a lesbian

and has explored the concepts of identify, imagination and

multiple truths in her writing.

“No amount of bullying, racism, sexism or

misogyny will hold us back”

Lady Phyll is a pioneering activist, famously known for

her landmark achievement as the co-founder and director

of Black Pride. The first event of it’s time to promote and

and wellbeing of ethnic minority communities. She has

won numerous awards for her work.

“ hen you become the image of your own

imagination, it s the most owerful thing you could

RuPaul is one of the most commercially successful drag

himself has made him an inspiring icon. RuPaul has been

a prominent figure and has supported LGBT+ rights and

equality throughout his career. Many have credited him

with bringing drag into the spotlight.

“S eak it aloud, state it clearly and without fear, re eat it

like a mantra, you cannot rogress with confidence. As

soon as you are clear about what you want, you can be

clear about how to get it.”.

choreographer, designer, producer and performer and the

founder and artistic director of the multi-media production

company Team Angelica. Rikki has been part of creating a

number of important shows and productions relating to LGBT+

rights including ‘Stonewall’ for the BBC, ‘Metrosexuality’ for

Channel 4 and ‘The Roots of Homophobia’. He was ranked fourth

on the Rainbow List of the 101 most influential lesbian, gay,

bisexual, transgender and intersex people in the UK. 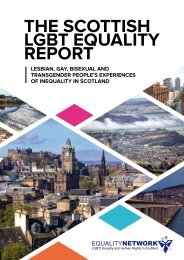