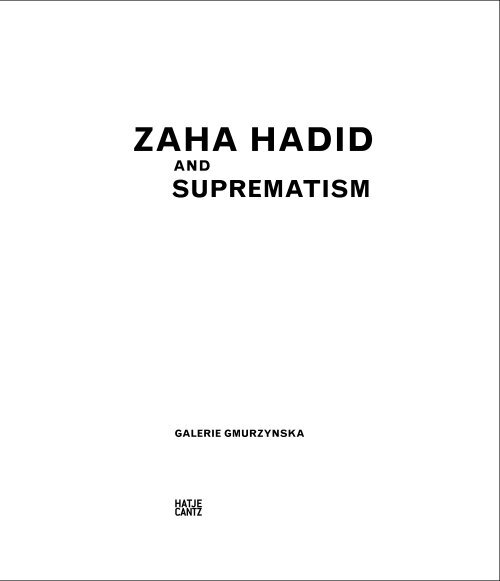 Following the first phase of Suprematism which had, above all, been about

the affirmation of non-objective elements, Kazimir Malevich would focus

on the philosophical exploration of the idea of a non-objective form. On

this path toward a kind of existentialism of the Suprematist “being”

(according to his own definition), he very rapidly succeeded in conceiving a

sort of osmosis between non-objective form and space. Projected with a

great kinetic energy toward infinite space, the Suprematist plans were to

be lost in this space; in other words, to identify and thus to merge with

where the idea of a forme fixe, a form with defined limits (frames) found

itself taken to the next level by the painter’s philosophical verve. The

creator of Suprematism thus defined the conditions of a new aesthetic,

thought of before. This revolutionary idea of an open form would inevitably

lead to the monochrome or, following Malevich’s definition, to the painting

of the “colorless” (see his 1918 manifesto; the first paintings of this series

were exhibited in Moscow in April 1919).

By going through the practical aspects of certain of his nearest

Russian comrades (Ivan Kliun and, above all, Olga Rozanova), the

advocator of this revolutionary idea would be imitated regularly throughout

the twentieth century. We find some of the first and most brilliant

affirmations made by his Polish student Vladislav Strzheminsky (see his

Barnett Newman was to go beyond Malevich’s ideas with his grand,

gave this lyrical verve an existentialist dimension unparalleled to this day.

capital moment in the history of modern painting.

Presented at Petrograd in December 1915 at the first Suprematism

exhibition (0.10), Carré rouge (Red Square) was to become one of the

presentation of non-objective (abstract) works, which showed a way of

doing things never before seen in the history of our civilization. Entitled

a Peasant Woman in Two Dimensions), this painting is merely comprised

of a simple red quadrilateral inscribed on a white background. Indeed, this

was something to shock the public. A revolutionary work in the best sense

of the word—similar to the famous Carré noir (Black Square), which was

part of the same exhibition under the laconic title Quadrilatère

(Quadrilateral)—Carré rouge illustrates better than any other Suprematist

work of this exhibition the concept of non-objective (Suprematist) painting

itself. This audacious composition also has the advantage of enlightening

the viewer on the path Kazimir Malevich took to reach his goal.

The reference to the rustic theme thrusts the present-day interpreter

these images of peasants, Malevich would focus on working on their

Cubist, then Cubo-Futuristic transformation. In 1915, he achieved a

painting that expresses, in a declamatory way, the title Réalisme pictural

(Pictorial Realism). We are thus dealing here with realism in painting as an

ideal and as a way of picturing imagined in the categories of the absolute,

and not the illustration of any extra-pictorial fact. The new painting

asserts itself free of any link, of any submission to another system of

The color red, quintessence of (pictorial) emotion, was glorified in

the form of a simple, slightly irregular quadrilateral whose absolutely

monumental simplicity spectacularly enhanced the ideality of the concept

of pure painting. From the first (black) quadrilateral, then the red one,

At the beginning of the 1920s, the importance of Carré rouge, taken as a

sign, would be underlined by El Lissitzky, who, under the impulse of

(History of Two Squares), this extraordinarily abstract narration sports a

red square and the number two on its cover, notifying children (to whom

two squares, of which only the red one, considered to be the victor against

the “Old World” (symbolized by the Carré noir), made it onto the cover.

The cosmic visions of Suprematism, the new way of painting introduced

the public speech he had given following the important analytic presentation

of his coloristic evolution (in Moscow in November 1917), he had

already included the subject of a Suprematist architecture. In 1919, when

he had achieved his journey in pictorial Suprematism, Malevich would

focus on the concrete elaboration of a Suprematist architecture only upon

setting up in Vitebsk in November 1919. At this moment, a new phase

began in his concept of Suprematism, as well as in the application of his

Suprematist ideas “in real life.” Thus, when he organized his teaching

courses at the Vitebsk Art School, he immediately included an important

architectural section. The young Lazar (El) Lissitzky was the artist

who, in 1920, seconded him in this task. Enraptured with Malevich’s

Suprematist ideas, Lissitzky would go head over heels into Suprematist

architectural creation. Under the direct impact of Malevich and in a state

of almost total osmosis with the ideas of his master, Lissitzky conceived

architectural projects at the end of 1919 which he would later call Prouns.

when the Suprematist circle at Vitebsk Art School adopted the acronym

“UNOVIS” (from Utverditeli Novogo Iskusstva or Champions of the New

Art). Derived directly from UNOVIS, the term “Proun” sounded like a sort

of fanfare for the UNOVIS camp.

Lissitzky defined his Prouns as fantastic compositions realized with

stations between painting and world architecture.” In his first Suprematist

text in 1920, he clearly indicated that his “constructions” were “exits

painting was the origin of his creation of the Proun. Benefitting from

an education in architecture he had acquired at school in Darmstadt,

Germany (1909–14) and, following this, at Moscow Civil Engineering

School (1916–17), Lissitzky had the technical means to realize Malevich’s

wild ideas. It is important to note that Malevich had then said that in the

The first Prouns were united by Lissitzky in a lithographic portfolio

he produced himself in 1920 when he left Vitebsk to go to Moscow.

This portfolio reunited the eleven first and strongest Proun projects,

which mainly distinguish themselves by their “constructive” exuberance.

For several of his works, we know the princeps versions, i.e. the definite

paintings, several of which were produced on wooden supports

Collection, London), one of the first works in the Proun series, was

painted on canvas before the end of 1919. Undoubtedly, Lissitzky’s first

Proun series, made in Russia before his departure to Germany where he

would reside from 1922 onward, was a crucial moment in the history of

Suprematism as well as twentieth-century architectural thinking. Being

1910–20 (Antonio Sant’Elia, Hermann Finsterlin, and the other members

of the movement Die Gläserne Kette), Lissitzky added the imaginary,

utopian dimension of Suprematism; in short, he strongly reinforced

Lissitzky’s Suprematist enthusiasm would lead him to develop the

Proun series during his second stay in Germany (1922–24). Installed in

Hannover for the Kestnergesellschaft, of which he was cashier, he created

a second Proun portfolio in 1923. Composed of six compositions, this

Kestnermappe was much more elegant and lavish than the 1920 series,

but had not quite the visionary force of the first set. The Proun

compositions created during this era contributed greatly to Lissitzky’s

international reputation and were, so to say, Suprematism’s spearhead

beyond the Russian border. They were greatly appreciated by the German

architects and first collectors of non-objective Russian art, such as

Katherine Dreier in the United States. In her role as director of the Société

Anonyme, Dreier would present to the American public (at the Brooklyn

In 1923, Lissitzky created a Proun space in three dimensions at the

Grosse Berliner Kunstausstellung which was an immediate success. In

1925, the Kühl & Kühn gallery in Dresden presented an important

Lissitzky exhibition where the Prouns were up front. We can safely say

by Piet Mondrian, an almost mythical installation today that was created

one year later (1926) in the same city of Dresden for a private collector.

It was destroyed during the tragic 1945 bombardments.

In 1927, Lissitzky received from Alexander Dorner, the audacious

custodian of Landesmuseum Hannover, the commission to create an

art and which referred manifestly to the Berlin Prounenraum of 1923.

Called Cabinet des Abstraits, this installation, destroyed by the Nazis and

reconstructed today at the same place, is one of the truly unavoidable

witnesses to the inscription of abstract art within European society of

Being a protean creator and of great emotional, thus existential, fragility,

prospective all through the 1920s up to the beginning of the 1930s.

Owing to his German contacts (the Hannover Kestnergesellschaft), the

event organized in 1927 by the Kartell der Vereinigten Verbände

Bildender Künstler in Berlin. At this time, thanks to his presence in Berlin

and his journey to the Dessau Bauhaus, Malevich suddenly emerged as

the initiator and grand visionary of Suprematist architecture in Germany,

or even of modern architecture altogether. But we should never forget

that Lissitzky opened this path in Germany. At that time, in the mid

1920s, a certain confusion had resulted between Lissitzky and Malevich’s

creations, which lucid critics (such as Ernst Kallai) didn’t fail to remark

upon. Malevich’s visit to the Dessau Bauhaus in April 1927 and the one he

for the evolution of architecture in the twentieth century, since, from this

moment on, a humanist and really neo-Platonic inflection can be noted in

the work of Mies which would change the image of modern architecture.

Similar to the new visions of a “Constructivist” Giovanni Battista Piranesi,

imaginary, had already prepared the path for this disruption several years

before the meeting between Malevich and Mies in Berlin.