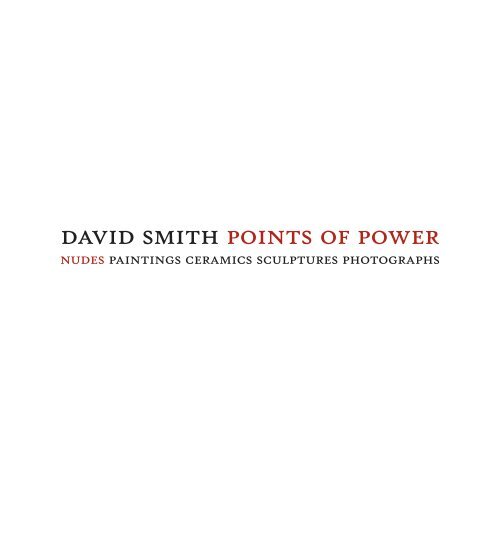 Excerpt from the catalogue “David Smith: Points of Power”, published by Galerie Gmurzynska on the occasion of an exhibition at the gallery space in St. Moritz, curated by the artist’s daughter Candida Smith.

Excerpt from the catalogue “David Smith: Points of Power”, published by Galerie Gmurzynska on the occasion of an exhibition at the gallery space in St. Moritz, curated by the artist’s daughter Candida Smith.

the points of power

Where do you find the points of power? A child knows; an artist with the soul

of a poet knows.

When I was a child in the Adirondack Mountains, all the girls loved

horses. One of my friends asked my father to show her how to draw a horse.

He said, “No.” He never taught my sister or me how to draw or paint representationally.

It limited the imagination. But my friend insisted until he could no

longer refuse. He said, “You begin with the point of power.”

The work in this exhibition appears to be my father’s most representational,

but look some more. The artist, my father, David Smith, kept his distance.

He gave his “models” no direction. The women here have no more

concern for the artist or his view of them than would a horse or a leopard, and

thus they have the same animal power and unconscious sensuality. They ask to

be seen as something other than “figures.”

Much of this work was created long after the photographs, in solitude,

setting of his house and studio.

When I was six years old and my sister seven, we asked our father for a

horse. He said, “Of course, but you must first study and make a horse to scale.”

We drew the bones, muscle groups (or we gave it our best effort), and learned

where the movement came from; where the power was. He made an armature

out of welded steel; we added muscles, flesh, and skin with plaster of Paris, old

sheets, and burlap bags. Then, and only then, were we given Jo-Jo, our magnificent

At the age of twenty-three, my father bought land in the Adirondacks,

with a vista of Lake George pooled between sweeping lines of mountain ridges,

vast lines studded here and there with huge rock faces. It was expansive enough

to fit his own vision. Kimon Nicolaides was then his teacher at the Art Students

League. He and his book, The Natural Way to Draw, gave my father a technique,

and the freedom, to make art that sprang from his own body. Eventually, large

metal sculpture sprang naturally from him, an expression of his size and power.

In the paintings, swooping lines cross and overlap in natural evocations

of his body and the Bolton Landing environment. Individually, the paintings

have a stillness, but as a group they spring into constant motion. The models—

for the photographs and, later, for the paintings—are students, some perhaps

students of dance. The paintings display women with a unique physicality.

They appear to inhabit their bodies fully while remaining, at the same time,

removed from their own sexuality. They communicate a self-contained awareness

being naked before a man.

The work here moves with rapid, unconscious association. It is constantly

in flux, never static. Two excerpts from a long poem my father wrote in 1947

evoke his response to both landscape and the nude:

I have never looked at a landscape without seeing

I have never seen a landscape without visions

of things I desire and despise

its stones are Assyrian fragments

it flows the bogside beauty of the river Liffey

it is colored by Indiana gas green

it is steeped in veritable indian yellow

it is the place I’ve traveled to and never found

The paintings are both landscapes and nude women, women he has never known

and never will know. They represent loneliness and are at the same time portraits

of his own anima. In his isolated setting above Lake George he was well

The photographs by Alexander Liberman were taken during the last weekend

of his life, as he entertained his best friends and showed them these nude

paintings with jubilation and pride.