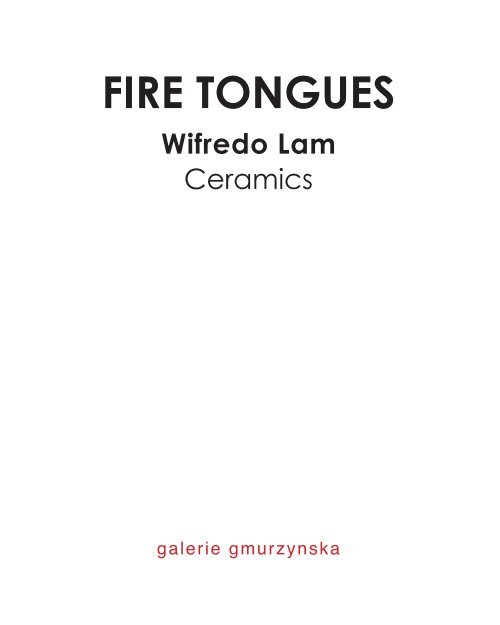 Anne Egger – Wifredo Lam or the Exultations of the Unpredictable

Wifredo Lam or the Exultations of the Unpredictable by Anne Egger

Damp clay, enamels, kilns, yet you are neither

ground nor sky nor water nor fire but the

dust of atoms and of the same grain: that of

internationally renowned for his

painted work and his prints, was a

man without frontiers, an unbounded

creator. Of Cuban origin, a great

defender of forgotten or oppressed

cultures, he put all his talent

into exercising the powers of his

imagination. He was a pioneer of

multiculturalism, both synthetic and

syncretic, a forerunner in conceiving

of an international modern art and

one of the first of his countrymen

mythology. Rising up at the

crossroads, his art – through its many

telluric forces of nature, impelling us

to contemplate what is universal and

authentic to our existence. When the

time was ripe for Lam to work with

ceramics, he experienced these forces

During his whole life and throughout

his numerous travels and encounters,

Lam never ceased to renew, or

interchange, his different modes of

Havana, he followed a calling for

sculpture before opting for painting.

He began to take an interest in

the medium in Cuba and in Italy, he

was encouraged to pursue ceramics by

the Danish artist, Asger Jorn. There

are ceramics that were created jointly

a set of dishware and made his first

took his definitive leap into the art of

ceramics in 1975, “beating the barrier

of the air” [René Char] and making

it his true passion. It was no accident

of fate that he had just completed

several trips to India. In India, he had

seen how earth as a material enters

every aspect of life, from religion to

architecture and where numerous

potters, all of lower caste, work with a

between Paris and Albissola, the

Italian capital of ceramics – the

equivalent of Vallauris his friend

Picasso brought out of oblivion.

Similarly this small village of

fishermen and potters on the Ligurian

coast had its place on the map ever

since the Renaissance but only truly

made its mark in the 20th century.

Aerofuturism (also known as the

factory in Albissola. It was Tullio

Marinetti in signing the Manifesto

After the war, Albissola attracted

artists from all over the world. It was

this remarkable collaboration between

artists of the avant-garde and local

artisans that propelled this ancestral

tradition into the domain of the arts.

veterans of the Nuclear movement,

the group that had founded the

International Movement for an

Imaginist Bauhaus only the year

before, organized an international

event in Albissola, the Incontri

the artists who gathered at the

Mazzotti factory were those affiliated

with the Spatialist movement such

the CoBrA artists, Corneille and

from surrealism; Guy Debord; and

Édouard Jaguer who had created

Phases. United in their stand against

and cultural conformism, they came

together for several days to embrace

and promote an experimental attitude

to art. Wifredo Lam found the

invitation from Jorn – his friend since

Very much taken by the proposal,

he set off immediately, only to arrive

too late: the artists had already left

the Ligurian coast. Lam, whose work

and exhibitions kept him constantly

– including a voyage to the Mato

Grosso with a team of gold diggers

– did not return to Albissola until

and Debord founded the Situationist

to the place for its cosmopolitan,

returned every year before making

it his permanent residence in 1962.

Jorn, who encouraged him to try his

hand at ceramics, introduced him

to the Ceramiche San Giorgio, a

studio founded by Eliseo Salino and

years, Salino and Poggi welcomed and

accompanied over 170 artists when

they came to experiment with and

This artistic laboratory is where Jorn

artwork for the Aarhus high school

– a true feat, considering this is the

Wifredo Lam’s first ceramics from this

period – incised tondi or panels in

relief – set the tone for his later works.

But he appeared to lack confidence,

admitting at this stage: “I didn’t feel

very comfortable with this medium I

couldn’t dominate.” He did assimilate

the difficult technique, however, but

without great enthusiasm. Perhaps he

guide him or maybe the firing process

proved too challenging, for it led

to more accidents than successes.

Even though Lam did not take up

ceramics again for ten years, the

experience had given him a taste of

and alchemy had always fascinated

metamorphosis of his figures and the

environment, the state of perpetual

myth are the expression in his

paintings of the alchemical notion of

Two years after the death of his

Wifredo Lam once again took to

the road of San Giorgio. This time

ceramics became his passion. He

threw himself into the new plastic

medium with unbridled energy and

his side to assist him and administer

to his needs. Lam evokes this period

as a “new emotional experience,” for

“working earth and fire is a passionate

act.” He set aside the tools of the

painter and plunged into the material.

The metamorphosis carried out by

the hand that models or structures is

setting a pattern on a plate has

Ceramic work is an operation that is

experimental by definition; it is also

an act of magic where chance and

the unknown rule supreme. Not only

are the colors applied with a blind

palette, but the fire transforms the

being a volume within space,” said

Lam, before adding: “I do this for

the creative freedom of art.” Indeed,

he once compared this exulted and

spontaneous freedom to his discovery

of surrealist automatic writing in

time, inventing something new every

day. Serge Sautreau evokes this in a

poem: “The game, this time, makes

him feverish. He grows so passionate

he can no longer sleep as these

parade forth during the firing process.

For the surprises tied to the different

intensities of the incandescence,

the precipitation of colors and their

transfiguration in the ardent cave. For

the metamorphoses the flames inflict

on the drawing, the enamel, for its

Lam’s ceramic work, in which “evils,

objects, objects diverted from their

utility: plates as masks or spiked

hold anything. In an iconoclastic

gesture, entirely given over to the

notches or rolls back whole sheaths

of clay to give a fish its flight. And

hence the artist attained a threedimensionality

that is both ancestral

and tribal in its method of bringing

life to forms. A truly “Lamian”

mythology invades these plates and

from his mind’s fertile world, “an

horse-woman. They have all come

out of the forest of Lam’s Jungle to

anchor themselves in the clay.

admired by fellow artists and

exhibited the world over. The fruit of

the artist’s dialogue with the earth and

with color, they are peopled by his

Bachelard wrote: “They’re the ones

who cook their colors. With fire, they

One of the painter’s greatest

pleasures was to invent new tints

or combinations of colors glazed

by fire, delighting in a form of

experimentation that has no end.

This magician of color knew how to

or muted tones. Unless he chose

to use the aerograph technique, he

on oxides or added pieces of glass,

which are in fact carefully sought-out

effects, are original creations in and of

Wifredo Lam is a protean, multifaceted

artist. His over 400 ceramics,

metamorphosed in the singing kilns

of Albissola, are unique pieces,

Magazine: Anne Egger – Wifredo Lam or the Exultations of the Unpredictable