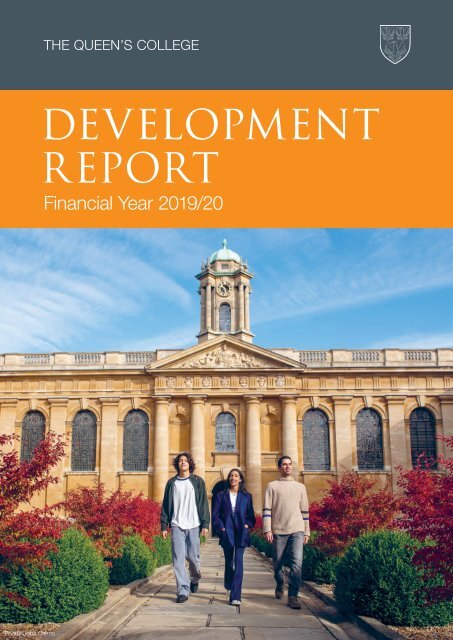 in new funds was raised

Queen’s with a single gift

67 donors have given for three

58 donors gave for the first time

1997 were the matriculation years with

the highest number of donors

Our donors live in 23 countries and span

• We have welcomed 47 new Queen’s Society

• 15 people converted their standing order to a

• The average monthly donation was £25

• 1984 is the matriculation year with the

* To join the Queen’s Society please complete the accompanying

Those who plan to leave a gift to Queen’s

Those who give to College via an active

Donors who have given for ten

Donors who have given for five

Donors who have given for three

To say this year was unlike anything any of us had

expected would be both an understatement and

a statement of the obvious. Yet despite the many

challenges faced by the College in the last six

we were continually reminded of the important role

and life of Queen’s. Without it, there is no question

but that the overall outlook for the College’s financial

health, and the range of choices it will face in the

coming years, would be markedly different.

We therefore count ourselves fortunate to study,

work and live in a College that has benefitted from

centuries of Old Members and friends having chosen

to support our students, tutors and historic buildings.

and Friends made gifts of

their own to Queen’s

the Provost’s Lodgings to see the statues of Queen

Philippa and Robert de Eglesfield and be reminded

of how a single gift can keep on giving. There is

something immensely precious to be found in the

continuity of a College and its enduring community

founded by an act of generosity and foresight, to

be held in trust and passed from one generation to

This year, 659 Old Members and Friends made

gifts of their own to Queen’s. Two academic posts

and the Brittenden Fellowship in Black British History;

Queen’s students were given financial support when

they needed it most; and the College’s ability to reach

out to those for whom studying at Oxford seems an

I recognise that each of these individual signs of

support takes on additional meaning in the current

financial environment. They remind those of us in the

College today of the importance Queen’s holds for

its Old Members and of the cross-generational and

international bonds of our community. Collectively,

we recognise that these gifts are what will enable

us to continue stewarding the College for those that

will come here to study, work and live in the years

Over the following pages you will be able to see

just some of the impact these donations have had

on the Queen’s community. There are undoubtedly

many more stories to be written and lives that will be

changed for the better in the years to come, and I

look forward to sharing them with you.

who choose to give in the future. Queen’s is not, and

will not be, immune from the difficulties created by

the pandemic but, with your support, it will continue

to flourish in all it does.

FROM THE SENIOR TUTOR

and press on with its academic and research

is thanks in no small part to its Old Members and

friends. Let me illustrate what I mean by this.

When the coronavirus forced the University to

announce a recruitment freeze on 21 April 2020, the

College was able to work with the History faculty

to secure the early replacement of the post held

by retiring History Fellow John Davis. Thanks to a

by Queen’s for the first five years, after which

it will be jointly funded by Queen’s and the

Faculty of History. Put simply, without this legacy

gift the College’s tutorial fellowship in History would

have joined the queue with so many other frozen

and academic profile, was an endowment gift

Queen’s received from the Carlsberg and Pettit

FROM THE DIRECTOR OF DEVELOPMENT

some of the impact our donors have had on the

Queen’s community over the past year.

totalling just under £5.5 million and from over 650

and from 23 countries. This is not only something for

which we are incredibly grateful, but as the Provost

has remarked, also a testament to the enduring and

cross-generational appeal the College continues to

hold for those who have been fortunate enough to live

and our Philippa and Eglesfield Benefactors came

Supporting cutting-edge research in a rapidly

changing field, this Fellowship has a natural home

at Queen’s and will put the College at the forefront

of a discipline that cuts across five departments

These important posts only came about thanks

to the generosity and foresight of Old Members

and friends of Queen’s. Each post will make an

invaluable contribution to the intellectual life of the

College: one post asks us to consider the past so

that we might envision and create a better future;

the other applies core scientific principles to further

our understanding of ourselves. Together, they

contribute to the relentless pursuit of knowledge

of the human condition, and they are reminders of

the disciplinary breadth that we proudly celebrate

together to help the

College, its students and

our donors have enabled us to

advantage of study and professional opportunities

raised the College’s profile for aspiring applicants in

Thank you again to those who chose to support

the Queen’s community last year, and on behalf

of the Old Members’ Office we hope to see

everyone back in College again soon.

The Queen’s Translation Exchange (QTE) was

established in 2018 and brings together people of all

ages to discuss and share literature from across the

globe. This kind of personal and creative interaction,

fosters a love of languages and encourages

new languages and – in the case of our youngest

members – go on to study languages at university.

both Old Members and friends of Queen’s – support

which has enabled us to grow as a programme

and deliver on our mission of bringing the love of

languages and translation to a new generation of

The pandemic posed a clear challenge to our inperson

events, but we were convinced that school

closures should not prevent pupils from engaging

creatively with other languages and cultures. QTE

have now developed a series of rich, creative virtual

encounters and have expanded activities to reach

a series of rich, creative

virtual encounters and have

During Michaelmas and Hilary, 15 students from

across the University were trained by Old Member

Six managed to transfer their workshops into virtual

sessions and the chair of our student committee

produced a series of mini video talks on studying

guest translators to join online meetings from across

the globe. The potential to recreate the warmth and

vitality of an in-person discussion led to an additional

book club: one for Sixth Form students studying a

us online to discuss The Island by Ana María Matute,

in Spanish). We’re pleased that the international book

club for sixth-formers will now be a regular fixture in

for sixth-formers will now

be a regular fixture in the

Bell OBE which provided young linguists with a

that we received were testament to the excitement

and creativity that translation can bring to languagelearners.

With support from Prof. Seth Whidden (Fellow in

of an extraordinary blog that began to appear in

comics-style blog depicts the pandemic from

and reactions of ordinary people as their lives are

suddenly changed. It is deeply moving and thoughtprovoking,

with plenty of humour, and presents a

real translation challenge. In June a total of 122

participants from across the world began to translate

sections of the blog.

started with our usual visits to schools and colleges

in our link regions, and concluded with a new online

programme of events for students as the country

entered lockdown. Thanks to the support of our

donors, we were fortunate enough to have the

this challenging time, including our four Virtual Little

our North-West link schools were invited to find out

more about the application process and life at Oxford

from the comfort of their own homes.

give up their time to support

studying at home during

Our fantastic Student Ambassadors continued to

give up their time to support outreach initiatives whilst

and interacting with Oxford hopefuls on our ‘Ask

in new and exciting ways, and thanks to the monthly

support from the Queen’s Society, we will incorporate

some of these activities into our programme next year.

We are also pleased to be able to announce that,

thanks to the generosity of one of our Old Members,

we will soon be increasing our ability to grow Queen’s

presence and institutional links in the North West of

England with the creation of an additional Access and

with all of the Oxford colleges operating in this region

Consortium) and will increase direct links between

the region and Oxford through a combination of new

We will soon be increasing

our ability to grow Queen’s

links in the North West of

England with the creation

only allow us to double our current Access provision,

supporting students within our link areas of Blackburn

Lewisham, and Sutton; but it will also put Queen’s at

the forefront of working to support more Universitywide

us to continue to make strides towards diversifying the

the University’s goal of increasing participation from

the financial year 2019–20. All care has been taken to ensure the accuracy of this list. However, if you 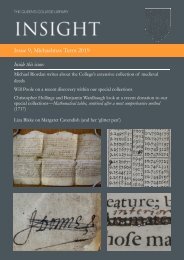 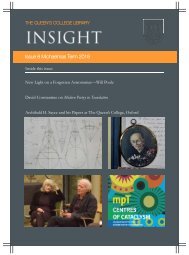 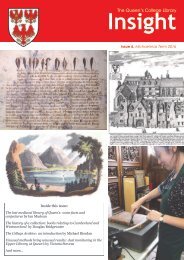 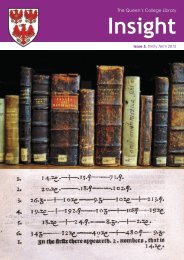 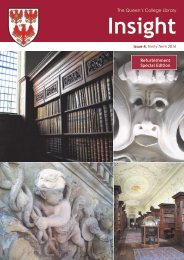 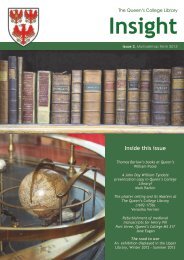 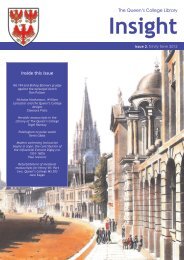 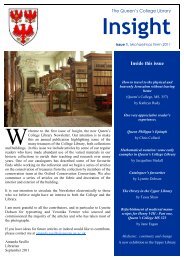 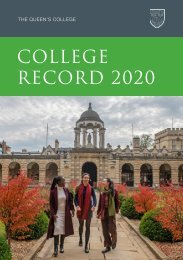 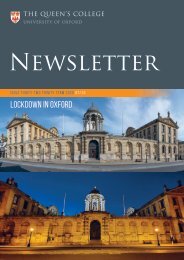 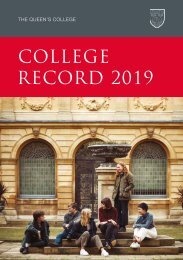 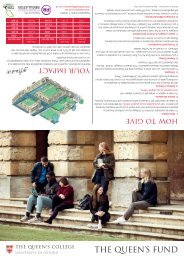 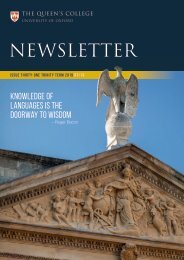 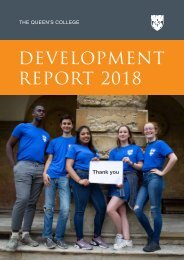 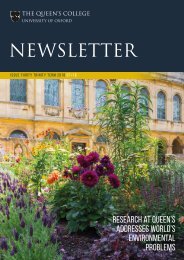 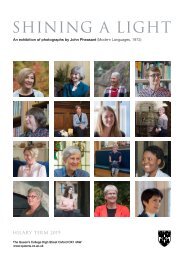 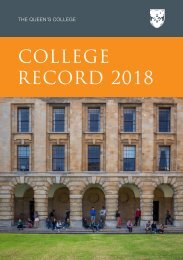