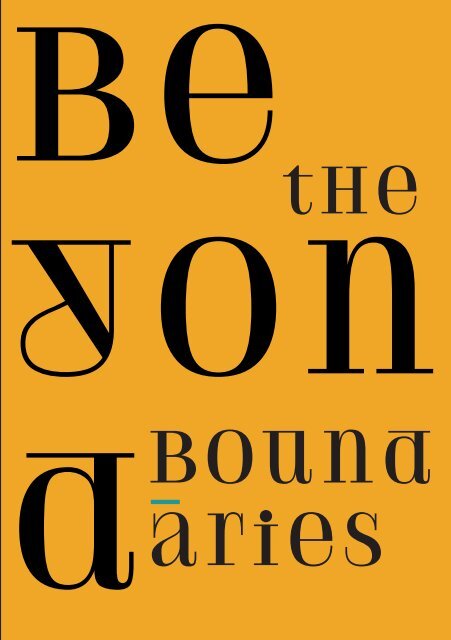 This exhibition zine showcases the diverse and exciting work created by the MA Fine Art artists at UCA Farnham. In a time of uncertainty and under radical constraints, we have found new ways to communicate and manifest our diverse practices. Exploring the newly emerging social and cultural energies, the work seeks ways of transcending conventions, the limitations of ideologies and restrictive belief systems.

A Space for Thinking

What We Leave Behind Dean Wright

What Will Be Left?

Stories of an Unknown World

Too Much in the Brain

What Happens if we Could

From a metaphysical standpoint, a boundary can be

seen to be a mental limit or barrier, created by the

host. It not only to signifies the dimensions of their ‘safe

zone’, but also the acknowledgement and existential

point of complete vulnerability and ignorance.

Brené Brown said this about vulnerability in her book

“Vulnerability is not winning or losing; it’s having

the courage to show up and be seen when

we have no control over the outcome.

Vulnerability is not weakness; it’s our greatest measure

​I constantly measure my life by looking introspectively

at my battles with expectations, through the

manipulation of boundaries. This year, the Earth

was met with an immovable expectation that

This exhibition to me, is an exploration into the mental

abyss that exists beyond our current limitations.

What happens if we could actually go beyond?

Through the description of the pain of people with

too much thinking, we can expose the fact that

capitalists oppress the people. To call on people to

reduce their ideas, accept and re like their ordinary

and imperfect. Let people no longer live in the

perfect standard set by capitalists, so that they can

get rid of the consumption trap set by capitalists.

This will make their lives better and easier.

Too MucH in tHe

a new way was found to memorialise loved ones

who died while travelling. A segment of humerus

or femur was taken from the corpse and split

lengthways down the centre (the nutritious

marrow given to children or the sick). The bone

was cleaned, dried and polished, often with sand.

Sometimes it was carved or written on. Lengths

of fibre were tied around shards of pottery, metal

or class – anything that would sound a note when

they collided – and attached to the lower part of the

bone, which was embellished with items belonging

to or associated with the deceased, making each

in cloth and only hung, usually in trees, when the

group had halted and felt secure. Many chimes

hung together signified a peaceful settlement

This latest work is a further exploration into the

morphing of role and identity;of ‘progression’/

changing ideas set against the complexities

of modern life. The three canvases have been

removed from their stretchers and hung

from oversized clothes hangers giving the

work a domesticated aesthetic and yet at the

I am a mixed media artist working with paint,

photography, words and sculpture. All my

work centres around the concept of hope

and suffering especially in relation to Black

an alternative hopeful future. That is to say,

no matter what pain, despite how we envision

the way things will go, it can always be turned

into good. My works allude to something

such a love, encouragement, joy, etc. but also

being a guardian protector. The photographs

are of my children; in whom I pour beauty,

them on but also in a detached way, whilst

always watching and observing and protecting.

Catherine’s work and practice focuses around

the connection between the body and domestic,

exploring the relationships our bodies and our

discarded materials have within the physical

around a metaphorical home, a non-domestic

space such as heaven. The phrase ‘Pull the Plug’

means to stop something from happening, allowing

something to escape or fall through. A plug inside

the sink gathers all the food debris so it doesn’t

clog the drain. A plug in the bath allows the water

to fill up so we can wash ourselves, it harbours our

discarded cells of the body. A plug is the opening

between the domestic space and the systems

below that transport our discarded materials to

other spaces, often back to the ocean. Of course,

the contaminated water remnants from the drains

are treated first but tiny particles of ourselves

goes through all the systems and filters to end up

in the grander scheme of the world, in this ocean,

just floating around waiting. This piece of an

parts of our bodies especially in COVID-19 times

but also what’s clogged up inside and where

we end up in the grander scheme of the world.

Stories of an Unknown World is a long multiinteractive

work, that explores the imaginary

and different realities through storytelling.

Explores a complex world with references

in escapism, mental health, and embodied

emotions. Can you discover the deeper

meanings behind each character? Is it real?

This work is looking at intricate connections

and associations we have and need to develop

further with our surroundings. It is looking at

the layers of information that are contained

in a single viewpoint or image. The work tries

to look in depth and beyond what is physically

possible and at underlying constructs which

could develop a new way of looking at the world.

explore the boundaries of the near future and

its technological possibilities and failures. The

triptych presented, each on an apparent space

issues the future presents to mankind. The viewer

is invited to construct their own narrative using

the images depicted – all narratives are valid.

In the 18th & 19th Centuries a number of pioneering

women established themselves as significant

Academies they were also prohibited from

of them made successful careers as painters of

what was regarded as the lesser form of ‘still life’

painting. Some three centuries separate their

work from mine and much of their work is only

known to me by virtue of their digital afterlives.

in three centuries from now. Will machine

learning and AI have taken us past the

Singularity to the point where computing

has independent imagination and creativity?

What will be left? reappropriates the

language of consumerism and moves it

into a new space, where it serves as both a

warning and a statement of hopelessness.

WHat WiLL Be Left?

The thin skin of the weather balloon bulges

through its rigid steel restraints. It feels

imprisoned; impotent against an immovable

structure. The skin is filled with air. Air: our life

force that has been immobilised, incarcerated,

is weakened, exhausted, and frustrated.

The iron lung was traditionally used to treat

patients unable to breathe for themselves, often

due to diseases such as polio. It had

been abandoned in favour of more modern

breathing apparatuses, however, since the

rise of covid-19, there has been a renewed

interest in the concept of the iron lung, which

assists breathing through a negative pressure

system. In order to receive the treatment, a

patient is imprisoned in an iron cylinder for

In parallels with the current government advice

surrounding covid, we can become trapped; our

personal liberty is sacrificed for the greater good.

The work depicts an interior space, rooms within

a house seemingly devoid of its inhabitants. The

emptiness is filled when the house as object

becomes a threshold space for memories,

feelings and experiences, these become activated

by being in or with that threshold space.

The viewer looks in but from where? From another

room? From outside? The obscured view of the

interior space breathes a feeling of intrusion and

at the same time that of isolation or abandonment.

The work addresses notions of care and

vulnerability and the fuction of home. The house

beomes a second skin, a part of self. The space

seems lost, hidden and like a lost memory, difficult

which the hidden spaces exist may

represent ‘what was or what is’.

The skin is an important marker of our identity and

something we take pleasure to define. However,

with the current movement towards enforced

personal territories, mediated by measures such

as social distancing and mandatory masks, we live

in a society where the boundary between ourselves

and others is increasingly being demarcated.

The cultural defence of our corporal boundaries

enforces the concept of our skin as a firm border

that delineates our body. But does our body really

end at the skin? Or should we view our skin more as

that our body’s personal electromagnetic

energy field outspreads the skin by about 3 feet?

The concept of our skin as a firm border

that effectively separates us from others is

contested by taking a look at the measurable

interaction of our bio-field with that others,

ultimately blurring the distinction between ‘self’

and the ‘the other’. When acknowledging this

energetic dialogue, we direct attention away

from the notion of dividing opposites, but sense

an intimate interconnectedness between us.

Introduction centres around a narrative that

reveals and introduces a collection of found

objects. The common thread that runs through

the collection is the conditions and essence by

which they are found. Discovery is made through

a ritual of activity, where intention is minimal.

Not wanting to replicate an archaeological dig,

the work is presented in a form that does not

have the answers but instead asks the questions.

Playing with numerous responses to the objects,

this work focuses on bringing the experiments

together in a coherent form to highlight the desire

for exploration and learning. It is a process

of becoming and the beginning of the story.

My collages started with a workshop we had

with the University early in the course, and

it was something I continued to work on due

to how much I enjoyed the way that they

allowed me to combine all of the different

facets of my work into a new piece of art.

These collages explored the idea of simply just

imposing shapes of texture over an image.

This work, Becoming Geology, is concerned

with humanity’s significant and increasing

modification of Earth systems. That breaching of

the boundaries, leading to bio-diversity collapse,

projects as well as by amateur observers of

local phenomena. All materials in this work were

found by the artist in a specific rural location and

are presented in the proportion 1:10 biomass to

baskets are filled with rock, concrete, plastic and

Photographs are such an important part of

through time. These photographs are painted

onto a Victorian garden wall, set into the layers

of the stone just as the memories are set

within me, traveling the generations and still

making their presence known. The wall upon

which they are painted is as old as they, for it

for they still remain imprinted on my heart.

Adlam’s work explores the conditions that

need to be satisfied in order for a work of

conceptual art to exist. To address this he

studied the philosophy of conceptual art which

he supplemented with additional texts on the

history of its development. As a result he

as ‘psycho-philosophical’: his intention was

to generate an ethically informed body of

work which simultaneously expressed the

distinctly personal meaning of ‘things’ and

the philosophical issues which they surface.

This publication is typed with:

Magazine: Beyond the Boundaries