Notes on François’ Days in Arles

Most of us have an attachment to objects. It starts in early childhood

– teddy bears and toys. For some of us this connection to the material

continues into adulthood, the stuff of bedrooms and nurseries moves to

drawing rooms and libraries. For collectors it is not, of course, the object

or painting or photograph that compels us to buy and keep it. We may

think it is, but it’s not. It’s the idea of the object. Its meaning, to us, is

more powerful than its visage. Inside of every pretty vase or illustrated

is the human interpretation and reaction to art that gives art its power.

Without us, art is inanimate. Without the viewer, it is invisible – art

needs us as much as we need it. François Halard has an especially strong

connection to interior spaces and objects – this attachment runs through

all his work. He says, “For me, collecting and living with art is like a

romance. In a way if you surround yourself with beautiful objects you

love, you have no deception. Because they are things you choose, they

belong to you. They never lie. It’s a romance without risk.”

François Halard’s house in Arles – documented in this book – was

bought 30 years ago, long before the city began its renaissance and became

fashionable. When he told friends about his plans he reminded me that

“everyone thought I was crazy.” His 18th century hôtel particulier is an

artwork in itself. An artwork made of brick, fabric, wallpaper, objects and,

finally, light. Light is that essential ingredient that gives houses and

architecture life and magic. It is also that mercurial shape-shifting element

that photographers and painters use like alchemists to create and capture

beauty. You can see his love for what is around him in every image. “I find

the light had to be right. Yes, just a click, but the click has to be at the right

moment. There were days when I asked François if he had taken new ones.

His answer was often: NO. The light was bad. The camera broke. He’d

run out of film. Great artists make difficult things look easy and these

Polaroids are the best of dozens that didn’t work. We’ll never see the

mistakes, which are like paintings that artists repaint, hide, or destroy.

canon of photographic techniques and apparatus. For me, this medium is

more like painting than photography – it is the impression of something

far more than a literal depiction of it.

The photographs in this book were taken during François’ confinement

in Arles. We all dealt with COVID-19 and its effects in different

ways; François had to continue to make work and his only subject became

the things around him. It is not uncommon for beauty to sit against a backdrop

of tragedy, like a Puccini aria. These Polaroids are little moments of

joy, or pathos, that on a personal level were an antidote to the anxiety and

fear we were all grappling with. There is also a sensitivity to them – born

empathy we all felt for those acutely affected by the crisis. In the storm of

early 2020 François had the house and its contents as anchor, muse, and

a source of solace. Of this time he says, “For me that period of isolation

was connecting with lost memories. It reminded me very much of when

I was young and I was in my room a lot. All I had was that room and its

contents – and later a camera. So for me this period and how I felt was

like a reminiscence of my adolescence, which was not a happy time for me.

I grew up in a house full of art and objects, but I have very few of these now.

In Arles I have objects which I have created memories around, it’s a fantasy

world. It’s my own imagination, finding objects that could have been family

objects – but are not.” It was a love of beauty and beautiful things that made

François want to be a photographer. “Since I was a kid I always found joy

and happiness and security in beautiful things. And I wanted to give my life

to that.” He is a believer in the power of art to change our lives – ascribing to

them a kind of secular Voodoo. “When you surround yourself with beauty,

it helps you go on. Beauty is medicine for the soul.”

Finally, though, this book is a celebration of beauty and art as

told through the 56 images here within. These Polaroids, taken March

through May 2020, are a document of a love affair, or many love affairs

– with rooms and objects and the house. I was lucky enough to share and

and inspiration when I needed it most. In these images we see African

masks, Japanese vases, fragments of textiles and wallpapers – many original

to the house. Flowers bought at the market, antiquities, faux antiquities.

When I asked what some objects were I was simply told, “I don’t know.”

We see his love of books in the library, which during “lockdown” doubled

as a gym. “Somewhere to exercise my mind and my body.” We see the influence

of Cy Twombly – a hero and someone with whom François shared

a love of myth and the ancient world and whose own Polaroids, of lemons

and flowers, inspired François. This book gives us a window into the

private space of an artist. Some of the rooms are grand, others, such

as the kitchen, are simple. We could describe it all (the house and the

works in this book) as a kind of self-portrait; François turning ideas and

dreams into something touchable, material, and tangible. Photographing

it and making that image an object, or group of objects, or space into a

published here in this book, they become another object. “With the house

and everything in it I have created an imaginary past, it’s like a novel,

it’s not true. It’s a novel in objects: not a biography, but a total fantasy.”

A great painting never reveals all of its secrets, which is why we

return again and again to it. François is always changing his house in

Arles, adding and subtracting, a process of creation. And the light is

always changing. Therefore, every image is different. Part of a whole

– but a whole that is forever evolving. I asked François three times to

photograph the lemon Cy Twombly gave him in 2005. Now dried up

and mummified, it is a memento of his visit to Twombly’s house and

studio in Gaeta. It passed from one artist’s hand to the other’s. It’s

a precious thing. And perhaps a private one. Symbolic, charged with

memory and a memento mori. All glory fades, as do lemons (rapidly)

and even, eventually, with enough light and time, Polaroids. The lemon

with light. The house in Arles will retain its secrets and no matter how

much we think we know it, it still has more to reveal. Even to François. 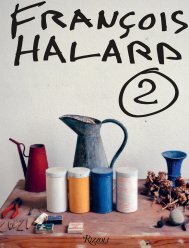