Subject: Preliminary Report of Subversion in the Antrim County Election

(EMS), Results Tallying and Reporting (RTR) application has been found to be

subverted. Numerous error conditions that are identified by the tabulator are

ignored by the EMS/RTR. The error conditions are easily reproduced and displayed

on the tabulator, yet the EMS/RTR has been subverted in a fashion to purposefully

ignore vote manipulation. This technical behavior is consistent with a subversion

reporting. This subversion technique is common among malicious actors seeking to

proactively handle error conditions that would jeopardize their ability to modify

describe the conditions that occurred in the Antrim election. The shifting of votes

described by Halderman during the November 3, 2020 election should have resulted

in Biden’s votes being shifted to the Natural Law Party, Straight Party Vote, which

Candidate) receiving a large number of votes as a result, or an error condition

contest. Neither of these scenarios occurred because the EMS/RTR was subverted in

(no vote for the Presidential race at all).

votes shifted between contests. However, when the EMS/RTR was presented with

the same results file processed on the tabulator, it reported no errors, but instead

erroneously reported those vote choices as blanks (undervotes) instead of generating

subversion and breadth of the configuration options available to the malicious

actors that would employ it.

with an ICP tabulator. If more forensic information and source code becomes

available for review, this assessment will be reevaluated in the light of the new

evidence available. Upon receipt of the source code a specific evaluation of the error

definitively determine the specific behavior of the software.

Discovery of Subversion of the Antrim County EMS/RTR

Party (Straight Ticket Vote from the Contest Above on the ballot).

contest. This shifting across the boundary of a contest should have created a critical

error condition during the processing of votes, however, in the case of Antrim

County election it did not.

The test scenario is as follows:

The test scenario implemented a swap between the internalMachineID fields of

Biden and the Natural Law Party in the VIF_BALLOT_INSTANCE.DVD file to

The test revealed the following:

• The ICP reported a critical error and does not finish processing the vote file,

does not print a paper tape, writes the error to the log file, and forces a

mandatory shutdown of the tabulator

votes and treats them as undervotes

The 1120_8_8_0_DETAIL.DVD file is a result file containing the votes that are cast

on the ICP. When the poll is closed, the ICP software processes the file containing

the votes and produces a paper tape with the tallies for each candidate. This

contest, for example the Presidential Contest. In other words, a malicious actor can

index remains in the correct range for that same contest.

However, for the purposes of this test the internalMachineIDs were swapped

between different Contests, the software in the ICP reports a critical error (see

Figure 1). The ICP does not finish processing the vote file (Figure 1), does not print

a paper tape, requires the operator to shut-down the tabulator (see Figure 2), and

records details of the error in the slog.txt file (Figure 3) on the compact flash card.

problem has been encountered. Note that the vote result file

1120_8_8_0_DETAIL.DVD is still correctly stored on the compact flash card.

The same compact flash card is then loaded on to the Antrim EMS/RTR software.

(See Figure 4). Prior to loading this compact flash card the EMS database is

manipulated by swapping 3015 and 3016 internalMachineID in the

reported as blank ballots and undervotes for that contest (See Figure 5). One of two

occur. The other possibility is that the software was able to check the range for

to what the ICP output. This would be a critical error that should have stopped the

application from further processing the compact flash card. Because the Biden vote

choice must exist and it did not exist, the application should have stopped loading

However, no errors were indicated of any kind by the EMS/RTR. The Biden votes

just became blank votes (no choice) when there clearly is a choice on the ballot. In

summary, either the shifted votes should have gone to De La Fuente (via Straight

that would have kept the votes from being tallied and reported.

technical subversion. Further in-depth analysis of source code would be required to

gain definitive clarity on the specific nature of the subversion. This would include

Under the penalties of perjury, I declare that I have read the foregoing report and

that the fact stated in it are true.

Appendix A – Ballots Used in Test 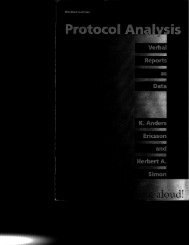