Our seats have been empty for far too long. At our core,

we exist to bring people together and to build community

around shared experiences. It’s time to get back to what

We have put together an incredible season, including

much overdue anniversary celebration. We have Grammy winners Amy

Grant, Richard Marx and Ricky Skaggs as well as the national Broadway

tour of Waitress and twenty-two other exceptional experiences waiting to

With so many great shows to see this year, we know you’ll want to

stretch your purchasing power as far as possible. Packages are a great

way to save! Our popular Pick-A-Plan enables you to customize your

season package. Simply pick 6 or more shows and SAVE $10 per ticket.

Thanks to an investment from First Federal Community Bank, we’re

pleased to offer the First Fed 15. This package includes ten diverse and

exciting shows we know you will love. All for just $15 each when purchased

After 10 years, there’s nothing we love more than being part of family

traditions. When you build memories with family and friends around a

shared experience, those memories last a lifetime. We can’t wait to

welcome you back. Let’s make some more memories together!

Join us in welcoming our

The Tuscarawas County Community Foundation was developed as a philanthropic

even after their death. The Foundation is a community endowment fund that

accepts monetary donations and bequests of any size, which are managed

by a volunteer board of community leaders, the investment income of which

Digger Cleverly, along with his nephews

from the remote part of the Ozark Mountains.

of puppies, it would be the Cleverlys.” Don’t be

fooled by this faux-family band – they are all accomplished

on cover songs from any genre.

Conventional wisdom has it that Amy Grant put Contemporary

Christian Music on the map, becoming the first CCM artist to have

a platinum record, the first to hit No. 1 on the Pop charts, and

the first to perform at the Grammy Awards. She’s earned six

The America I Grew Up In

on marriage and family, is a hit with all ages. A live

amassed over 100 million views on social media and other platforms,

introducing him to tens of millions of new fans worldwide. At times

both gut-wrenching and hilarious, Jeff’s one-man show, The America

I Grew Up In, offers a unique glimpse into his crazy world.

Inspired by the beloved film, WAITRESS tells the story of Jenna, an

expert pie maker who dreams of a way out of her small town. A baking

contest and the town’s new doctor may offer her a fresh start, but Jenna

must summon the strength to rebuild her own life. Don’t miss this uplifting

celebration of friendship, motherhood, and the magic of a well-made pie.

people thought of as “vocal

music” and have been at the

forefront of the contemporary

a cappella scene ever since.

performers continue to push the

boundaries of the human voice. With an

over 30 European tours and various other international

stage in a stunning one-man, multi-character show that will reach into

stirring book, Beyond Glory presents the

powerful first-hand accounts of these veterans

from World War II, Korea, and Vietnam, whose

courageous actions led them to be honored

with the nation’s highest military award.

Thanks to our generous sponsor, tickets

for this event will be FREE for Veterans

and Active Duty Military and their families.

The Purple Xperience, formed by Dr. Fink and

front-man Marshall Charloff, is a five-piece

Minneapolis, MN. They have been

touring around the country bringing the

greatest and most authentic production

of Prince and The Revolution in the

world to audiences of all generations.

Since 2011, The Purple Xperience has

fans and has shared the bill with

An Evening With Jay Leno

Favorite TV Personality in the 2009 Harris Poll, Leno is best

Join us ON STAGE for a

Set in that sassy Miami house in 1985, ‘That Golden Girls Show!’ is one

moments with puppets! Get set for an evening of cheesecake, laughter,

jazzercise, shoulder pads, sex, and the elegant art of the quick-witted put

down. Devoted fans will fondly remember our four girls from Miami, and

for the first-timers, this will be a joyful introduction to the brilliance of that

Event is not subject to normal

benefit tickets may not be

redeemed toward this event.

extends more than three octaves, has brought the

house down in the world’s most prestigious

as a member of the popular and prestigious

Gaither Vocal Band. As a solo artist, he received

Vocalist of the Year and Long Form Video for

the Christmas DVD, O Holy Night to add to

and most recently the 2018 live DVD It Must Be

The Midtown Men, reuniting stars from the

will ring in the Christmas season this

year with their “Holiday Hits” show.

This evening of songs and stories

such as “Winter Wonderland,”

“Let It Snow,” and “Have Yourself

a Merry Little Christmas,” as well

as their signature renditions of the

greatest rock and roll hits of the

1960s. The popular vocal group will

treat their audiences to the songs of

The Beatles, The Temptations, The Four

Seasons, and more! Come celebrate “the most wonderful time of the year”

with these seasoned Broadway veterans!

easily among the most significant in recent country music history.

Skaggs is a member of the Country Music Hall of Fame, the

of Fame, the National Fiddler Hall of Fame and the Gospel Music

Association Hall of Fame. His life’s path has taken him to various

musical genres, from where it all began in bluegrass music, to

striking out on new musical journeys, while still leaving his musical

A combination of fast-paced physical

comedy and mind-bending magic that will

leave you gasping for breath and scratching

your head as reality takes the night off and

Partridge has been delighting audiences

around the globe; from the celebrated

Apollo Theatre in London’s West End to the

that you will never forget!

for the past decade as his chart topping debut single “A

Little More Country Than That” established Corbin as

a mainstay on the country charts. Billboard’s 2010

Top New Country Artist would go on to garner

another No. 1 hit with the feel-good “Roll With It”

himself from other male vocalists

as a tried-and-true country traditionalist who

weaves timeless story songs together while

tipping his hat to the classic country artists

who have come before him.

Paddington Gets In A Jam

The perfect show for children, or nostalgic

comedy has the audience giggling

in a Jam is not only a

bundle of joy and

manages to warm the

hearts of both children and

adults. If you’re looking for

a fun time with the children in your life, do

everyone a favor and see Paddington Gets

Enter the most unlikely setting for a circus, a

factory. One where the workers are acrobats

and the machines are circus props. Birdhouse

Factory is a simple story of daily life

Prepare yourself for an exceptional

evening of wit, whimsy and

wonder on this spectacular ride full

of daredevil antics, circus acrobatics and

Ohio, Yankee Bravo is an

Their music is honest,

entertaining, and from the

This Performance is part of the Cabaret Series.

members together onstage for a special evening of great food

and exceptional entertainment. Share an evening with one hundred

fellow audience members as you are seated onstage in an

meal as part of your ticket price.

million albums worldwide while making history as the only male

artist whose first seven singles reached the Top 5 on the

Billboard charts. Overall, he has scored 14 No. 1 singles, both as

a performer and as a songwriter/producer, revealing him a true

multi-talented performer who continues to challenge himself and

his fans. “I’m so excited that I’m still doing this and it’s on a level

and again and I’m very proud of my live show. I want fans to walk

away feeling like they know me after a concert.”

Biography Series is a critically acclaimed

created this series not just to entertain and inform,

but to awaken the greatness that lives within us

all and celebrate some of the world’s greatest

In 1977, history was made upon the release of THE GRAND ILLUSION

album. DENNIS DEYOUNG AND THE MUSIC OF STYX celebrate that

LADY, BABE, COME SAIL AWAY, TOO MUCH TIME ON MY HANDS,

percussion quartet. For fifteen years, the ensemble has forged a unique

path in the musical landscape with virtuosic, energetic performances that

celebrate the extraordinary depth and breadth of musical possibilities in

the world of percussion. SIMPLY CAPTIVATING!

and songwriter on seven of the bands eight Top Ten hits. DENNIS is a

with a career spanning over 40 years. His voice is one of the most

recognizable in the music world today and continues to inspire new

generations of fans. THE ORIGINAL VOICE....ALL THE CLASSIC

Back by popular demand! We Banjo 3 has emerged as fast-rising touring

darlings. They continually push musical boundaries while maintaining an

converge the shared and varied traditions of Americana, Bluegrass,

Led by Guinness World Record holder for The Fastest

Feet in the World, James Devine, and five-time World

and joined on stage by a motley crew

of mind-blowing live musicians and

Honoring past traditions but blasting

them feet first into the 21st century,

Velocity Irish Dance is the

next generation in Irish tap.

Jazz, Contemporary Folk and Celtic music ... with a consistently masterful

This Performance is part of the Cabaret Series.

and audience members together onstage for a

hundred fellow audience members as you are

seated onstage in an intimate performance

as part of your ticket price.

She was a girl from Boston with a voice from heaven, who shot

through the stars from gospel choir to dance floor diva. But what

break through barriers, becoming the icon of an era and the

inspiration for every music diva who followed. With a score

featuring more than 20 of Summer’s classic hits including “Love

to Love You Baby,” “Bad Girls” and “Hot Stuff,” this electric

experience is a moving tribute to the voice of a generation.

Dubinsky is a “multilingual musician

who can capture the emotions and soul

of a community in a song.” (Felix Contreras).

and performs in English, Spanish, French

and Portuguese. Her presentation of original

songs alongside her band (drums, bass,

an engaging blend of world-beats, jazz and pop

Our most versatile and popular package! Pick six or

more events from our entire season and SAVE $10 per

ticket. Mix and match to tailor this package specifically

In celebration of the PAC’s 10 th Anniversary, First

Federal Community Bank is proud to bring you these

First Federal and the Performing Arts Center share a

commitment to invest in our community by keeping the

First Fed 15 Package seating is located in either the

Mezzanine or Dress Circle Section. There are no substitutions

or exchanges of shows within the package.

generation. This immersive multi-media show will place you at the front

film footage recreate the era’s excitement, fashion, and headlines; all

the while a full live band performs all of the hits of the Swingin’ 60’s; the

iconic British pop sound that swept across America and the world.

Parking is FREE and convenient

The Performing Arts Center at Kent State University at Tuscarawas is

committed to providing accessible and inclusive events. For more information, 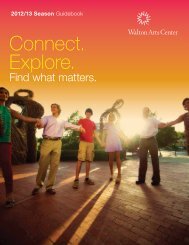 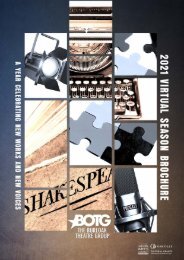