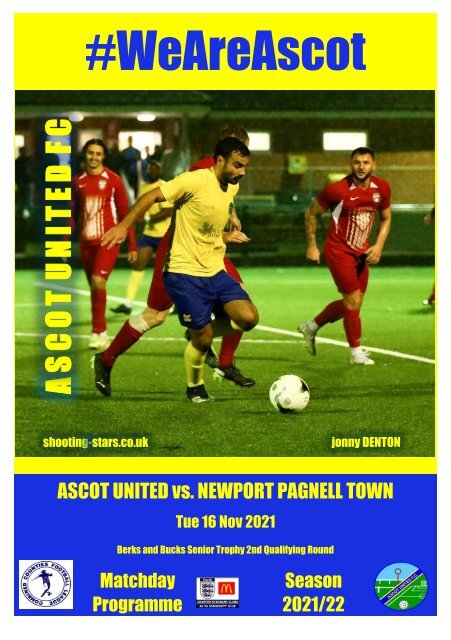 Welcome to The Racecourse ground for tonight’s

County Cup game and a special welcome to Newport

I’m sure everyone is aware of the added incentive

linked to the game tonight – the winners have a home

draw in the next round against National League

“giants” Maidenhead Utd. I’m sure the managers will

be telling the players not to think that far ahead, but

I’m equally sure the fans will have that mind…

Talking of fans, one of our biggest fans is soon to be

leaving the area to return to his native Australia. Grant

Broderick is the epitome of the perfect grassroots

volunteer – he helps with the coaching of his son’s U13

team, he is usually in attendance at first team games

(with Peroni in hand) and helps out around the club

during the week. I remember when he first got in

touch to see if there were any jobs around the club

that needed doing – utilising his experience of

working at Melbourne Golf Club. Jo and I couldn’t quite

believe our luck, and quickly came up with a never

ending to-do list – Grant has been invaluable over the

past couple of years and he will be sadly missed

around the club. Thank you for everything Grant and

make sure you keep in touch.

Just a reminder that if anyone is planning a corporate

meeting or special event, our Ascot Sports Bar is

available to hire at very reasonable rates. We have an

excellent facility available and have recently

appointed Sam Knight to be our Events Co-ordinator so

Hope you all enjoy the game tonight…

A warm welcome to Newport Pagnell Town for

Welcome to the players, officials

and supporters of Newport

Hello and welcome to Newport Pagnell Town FC players, staff and club committee and to all supporters

encouraging and I felt up until 70 minutes, we more than matched our league leaders. Luck and

decisions are not going our way either, however, with hard work I’m confident we can get ourselves

back on track this evening.

A big thank you for all the support we are receiving!

incentive of hosting National League side Maidenhead United in the next round.

the Women’s FA Cup First Round, the furthest the club have gone in our history. Our U18’s, away at top

of the league Westfield drew 2-2 last night. Another encouraging performance from our ‘young Yellas’

and with games in hand, it looks set for an exciting season. Well done to Darrel and Alix with the ladies

team and Josh, Chris, Matt and Jake with the U18’s.

Thank you to our sponsors, club officials and volunteers for all the fantastic work and ongoing support

towards our football club.

Welcome to the players, officials and

supporters of Newport Pagnell Town for

home tie with National League side Maidenhead United. After a winless

savoured. But our visitors tonight are in good form in the United Counties

winning streak during which they’ve conceded just one goal. I believe

thing I can do is put a link into the Berks and Bucks website, here and you

image to see and hear Clapton

with their team last Sunday

of a crowd of around 100. I also had a scan around the other Women’s FA Cup

took 300-400 fanatic supporters to Bedford, won on penalties, and then it

was pandemonium. Take a look at the clip via the link above and turn the

volume up! Back to us, and after tonight it’s a tough home league game

against St Panteleimon this Saturday before the unenviable tough midweek

drive to AFC Croydon in the league cup next Tuesday. Hmmm… Anyway, enjoy

*Abandoned due to serious injury with 12 minutes remaining. Result stands.

Below are the updated Ascot United appearance and scorers' records for

Need a room for your

is a perfect choice for

to explore availability and

which they have competed. The Ladies’ section starts down at the junior level with a host of teams –

(reserve) side playing in the Thames Valley League. The junior sides operate on Saturdays or

Sundays, with the Seniors (First and Development) playing on Sunday afternoon. The first team are

managed by Darrel Evans and coached by Alix Todd. The reserve team is managed by Jon Swallow.

Find out more on our website. Sponsorship packages now available - ask a member of the committee!

striker Sarah Leonard. The Group have practices in

Ian is a Biomechanics coach, supporting players returning from injury and

Solid goalkeeper, confident with the ball at

his feet. Established first teamer since 18/19

when he appeared in every league game.

Established left-back having broken into the

team in 20/21 following a move from local

Goalkeeping coach and reliable backup. Has

International experience having played for

Experienced centre back who skippered

at a higher level with Marlow and has a level

A physical and dominant centre half who

signed from Faringdon Town in 16/17 and now

well-established as club captain. Made 146

appearances heading into 21/22 but must

wait to add to that tally whilst he recovers

for Camberley Town, Egham Town and

Chipstead. Looking to re-establish himself in

21/22 following a year out with serious

A fearless right back previously with Binfield

and Bracknell. Technically strong and a

Ascot United Allied U18 captain who is

expected to feature for the senior side

ball specialist, he has now twice won the

season having made 176 appearances.

Signed for 21/22 having had spells with

Harrow Borough and Beaconsfield. A

Signed in 19/20 having previously starred for

a National League youth side. Also had a spell

making his first team debut in the same

season. Sam has been with the club since

his debut for the U8s and is now an

established part of the senior side with

Popular attacking midfielder who returns to

Ascot for 21/22 having been out for two years

with a serious knee injury. Previously

Skilful forward signed from Walton and

Hersham for 21/22 having also played for

A former professional with Premier League

Rovers before beginning his non-league

journey in 2014. Signed from Windsor FC in

Signed for 19/20 and continues to improve.

Looking to re-establish himself after injury in

Calm and composed figure on the pitch and

anywhere across the front three and has an

abundance of pace. Has a keen eye for goal

backed up by providing plenty of assists. A

personal trainer, he works hard and is

Prolific goalscorer who scored 25 goals for

Binfield in 18/19 before top scoring for Ascot

campaign. Netted another 12 from 24 games

despite often playing out of

position. Enters the season having scored 52

goals in 109 appearances with an improving

supporters’ player of the season award.

Pacey forward who impressed whilst playing

against us for Fleet Town during pre-season

20/21. Has played at a higher level including

several seasons in the US Major League.

Highly respected throughout the club who

guided the team to league cup glory in 18/19

before taking the team to top of the league

before the 19/20 campaign was curtailed.

midway through in the 20/21 season and has

the potential to cause problems for any

Striker who signed in Sept '21 and scored on

his debut having previously played for

Lively forward who signed from Burnham, for

whom he scored 3 goals in 11 appearances in

Jamie began his career with Reading before

making over 100 appearances for Portsmouth

where he coaches at all levels. Sponsor:

Dan is in his fourth season with Ascot Utd and

is a crucial part of the coaching staff.

Ascot United as we know it, was founded in 1965 by a men’s team who played their games at Sunninghill with “after

match meetings” in The Wells in Cheapside village (now Mikado’s). Teams played as long ago as 1928 under the name

Ascot United but nothing to link them directly to the current club. In 1965, the club had gained permission from the Ascot

Racecourse Trustees to convert the land east of coach park 10 into a football pitch. A wooden clubhouse was built and

this team went on to win many prestigious trophies in the years that followed.

Various youth teams represented Ascot United over the years up to 1988, and 1992 the East Berks 7-a-side Association

men’s team also reformed. The club continued to grow, entering into partnership with Charters School and being

in 1996/7. 2001 saw the 1st team join the Reading Senior League and winning the Evening Post Senior Cup at the

Hellenic Premier Division in 2009. The club today has grown to become one of the largest Community football clubs in

from 5 year olds through to Vets. A new clubhouse opened in September 2010, together with an improved main pitch,

floodlights and a stand.

winners of leagues and county Cups. Our senior Ladies won promotion to the Premier Division of the Southern Region

19 was an outstanding one for our junior Boys’ teams who won an array of county cups at various age groups, a feat

The past decade has been hugely successful for our first team; our debut in the FA Cup in 2011 attracted 1,149 people to

finishes in the Uhlsport Hellenic League Premier Division, and won both the Bluefin Sport Challenge Cup and Perpetua

Press Floodlit Cup. More recently, our players’ development took the spotlight, as a host of Yellamen have enjoyed

success with other local sides and many of our talented development players stepped up into the first team. After

We were transferred into the Combined Counties League for the 2019-20 season, playing on our new 3G pitch facility,

which transformed the club by facilitating more of our teams’ matches and training at The Racecourse. The stronger

platform facilitated further player development, and Jamie’s young side would lead the table for long periods before

Coronavirus. Retaining much of the same squad for 2020-21, Jamie saw his side in and around the challengers before

another pandemic-curtailed season, although they battled through to the league cup final where they were ultimately

beaten on penalties by Redhill.

As Ascot enjoy a third season in the Combined Counties League, everyone hopes for a safe and consistent campaign,

and if silverware comes with it then that will surely be a bonus in current times!