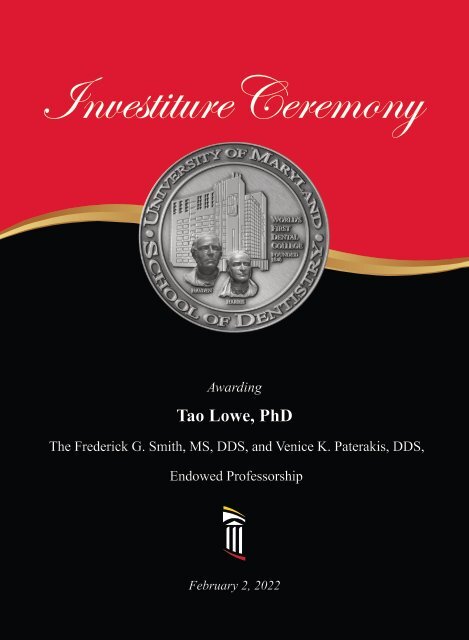 Tao Lowe, PhD, is a professor in the Department of Oral

and Maxillofacial Surgery at the University of Maryland

School of Dentistry (UMSOD) and the Fischell

Department of Bioengineering in the A. James Clark

School of Engineering at the University of Maryland,

College Park. She is the inaugural recipient of the

professorship established at the School of Dentistry.

within UMSOD’s Department of Oral and Maxillofacial

Surgery in addition to providing leadership in

Dr. Lowe previously was an associate professor of Pharmaceutical Sciences and

professor of Pharmaceutical Sciences at Thomas Jefferson University; and assistant

co-director of the Integrated Graduate Degree Molecular Toxicology Program at

in the Chemical Engineering Department at the University of Wisconsin-Madison.

Dr. Lowe’s research interests include the design and development of novel,

delivery for tissue engineering and disease therapy. Her work has focused on

approaches to treat diabetes; cancers; diseases in the eye, brain, ear, and face;

COVID-19; and regeneration of bone, cartilage, and nerve. She has made unique and

research and education at the interface of materials, chemistry, physics, engineering,

The author of more than 250 scholarly articles and presentations, she holds eight

and two pending U.S. and international patents. She has garnered more than $14

and private agencies and foundations. Dr. Lowe has presented more than 90 invited

agencies in the U.S. and other countries. She also has served in leadership roles

in professional societies including the American Association of Pharmaceutical

Biomaterials, Controlled Release Society, and Association for Research in Vision

and Ophthalmology. In her lab, she has trained more than 130 individuals who have

pharmacists, and educators. Dr. Lowe has achieved numerous honors including

Foundation, member of the University of Maryland ADVANCE Leadership Fellows

Program, and fellow of the AAPS.

Office of Development and Alumni Relations

A. James Clark School of Engineering

Department of Oral and Maxillofacial Surgery

A. James Clark School of Engineering

committed for decades to working to improve the

first endowed professorship at the University of Maryland

School of Dentistry (UMSOD), where they met as dental

students in the late 1970s. In doing so, their aim was to

member who would pursue new areas of research and

will be provided to future students,” Dr. Smith said. “The goal is to attract someone

who can be creative enough to establish a revenue stream for the School of Dentistry,

primarily through research and discovery, and that those advancements would also

help improve the oral and overall health of the general public.”

The endowed professorship is by no means the only educational venture that Drs.

Smith and Paterakis have supported. Recognizing that leadership qualities are necessary

for future success, Dr. Smith in 1996 founded Gerstell Academy, a private school for

children in pre-kindergarten through 12th grade located near Westminster, Md. He is

chairman of the Board of Trustees and president emeritus of the nonprofit institution,

which teaches a curriculum focused on leadership, college preparatory academics,

physical training, and modern language fluency. Dr. Paterakis, too, devotes time to the

academy, serving as vice president and secretary of the Board of Trustees.

Dr. Smith also serves on the board of trustees of the University of Maryland Baltimore

Foundation, Inc., among other groups, and Dr. Paterakis has been active with the

Maryland Ronald McDonald House and supports many other charitable organizations

such as Yumi Cares and Horizon Day Camps.

Both Drs. Smith and Paterakis, who in 2018 received honorary Doctor of Public Service

degrees from the University of Baltimore, Maryland, are members of prominent

Baltimore families and can point to accomplishments in many other endeavors —

including business and dentistry.

national networks; and has TV stations affiliated with all the major broadcast networks.

Dr. Smith practiced oral and maxillofacial surgery in Hunt Valley for more than a

dentistry in the Fells Point/Harbor East area of the city for 33 years, is one of six

business and more recently has been involved in the development of Harbor East.

Noting that she was honored to enhance education at the university, Dr. Paterakis

said, “Philanthropy and service to the community were values instilled in me at a

The Tradition of Endowed Professorships

creation of the Lady Margaret chairs in divinity at Oxford and Cambridge universities.

The original endowed chairs were sponsored in 1502 by Lady Margaret, countess of

financial contributions to establish other endowed professorships and chairs such as

the Lucasian Chair of Mathematics, which Sir Isaac Newton held beginning in 1669.

Professor Stephen Hawking, the internationally renowned physicist and recipient of

the 2010 U.S. Medal of Freedom, was another prominent holder of the endowed chair.

The honor associated with appointment to an endowed position has remained

that an academic institution can bestow upon its most distinguished faculty.

These endowed professorships and chairs continue to reward exceptional scholars

uninterrupted to the present time.

through robust research, patient care, and educational programs and initiatives.

their generous support of its endowed chairs. 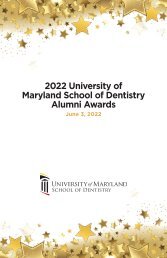 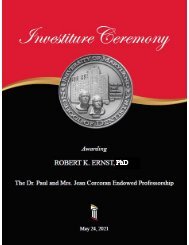 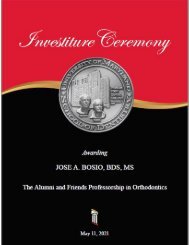