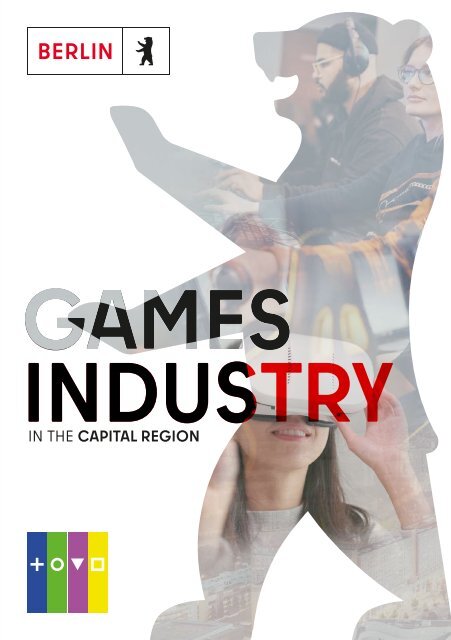 Games Industry in the Capital Region

In the capital region, start-ups work alongside well-established game

developers and publishers. Berlin is home to offices of world-renowned

companies from the gaming industry and political institutions, federal

associations and networks have their headquarters in the German capital.

International industry conferences and events attract professionals in the

creative fields, investors and specialists from around the globe. On top

of that, Berlin offers a pool of young regionally-trained talent.

Around 270 companies in the gaming industry including international headquarters

“Berlin is a very creative city, where every company

finds its place, from local start-ups to big international

players. With its pulsing energy, it is very attractive for

young talents from all over the world and the gaming

industry in Berlin benefits from the strong and diverse

Berlin has the highest number of gaming companies in Germany. These develop, publish,

distribute, market and advertise video games. On top of that, they contribute to the successful

production of console, online and mobile games, as well as cross-platform content and

“We have grown to a studio of roughly 150 people in

less than three years. And for the future there is a lot of

potential to grow further in Berlin. The most important

thing is that we see the games ecosystem continue to

Berlin one of Europe‘s top esports locations. Companies such as Wooga, Bigpoint, Yager,

Deca Games, Kolibri Games and King contribute to the international success of online,

e.V. and federal associations have their headquarters in Berlin.

Just outside of Berlin you can find Babelsberg, one of Europe‘s leading film industry sites,

including the Volucap, the first volumetric video studio on the European continent and the

the ideal conditions for the growing games industry.

underpinned by numerous offers for

as Berlin-Brandenburg. At universities such as HTW Berlin and the Berlin University of the

Arts, students can take degree courses that focus on the gaming industry. The Film University

Hochschule and the School for Games all offer training courses in the heart of Berlin.

Research institutes such as the Digital Games Research Center in Potsdam and the DE:HIVE

Institute at HTW Berlin – University of Applied Sciences are active in games research.

Comprehensive support in the form of consulting, financing and subsidies

Medienboard Berlin-Brandenburg supports the development of digital games as

well as networking projects on national, international and cross-sectoral levels.

Germany with loans of up to several million Euro.

The Berlin Senate Department for Economics, Energy and Public Enterprises and the

or loans for capital investment, salaries and technology-oriented R&D projects, as well

as with infrastructure projects, competitions and trade show presentations.

digital and creative economy. The guiding principle is for Berlin to be a creative,

innovative and economically successful metropolis with an international presence.

invest in start-ups during their initial and growth phases.

Technology and Brandenburg Invest (WFBB), provide information about the

range of support and financing options.

“Government funding is a big part of our financing and

very important to us. We got our first funding for Through

the Darkest of Times through Medienboard Berlin-Brandenburg

“Berlin is an excellent place for conferences, festivals

and trade shows. It offers a great combination of infrastructure

for business travel and touristic value. The attractiveness

of the city and its surroundings as well as its

and institutions make it the perfect place to host game

CEO and Founder of Booster Space Events and

Consulting, Founder and Head of gamesweekberlin

international games scene. The gamesweekberlin has evolved into a major industry platform

the program for women in games and tech. As part of it, the German Computer Game Award –

the most highly prized games award in Germany – is presented in Berlin every two years.

On top of that, with several esports organisations based in Berlin, many esports tournaments

and events take place in the region. Furthermore, in Potsdam you will find the Media-Tech

Hub Conference, the only B2B event on media technologies in Germany, as well as the

Berlin is a very diverse and multicultural city in the heart of Europe. With around 3.7 million

Berliners from 190 nations living in the twelve districts, the city has become a melting pot

that attracts talent from all over the world. There are several networks and associations that

can help establish a business in the capital region, including support to find the right office

“Berlin attracts talents from all over the world who enjoy

living and working here. Why? I don‘t know any other city

in the world that is so complete: cultural and subcultural,

and grown-up. Above all never boring and always full of

TO THE GAMES INDUSTRY

Berlin Partner for Business and Technology GmbH, commissioned by the 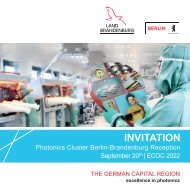 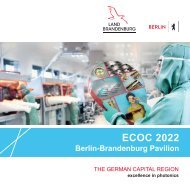 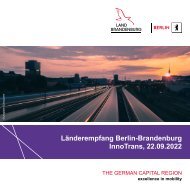 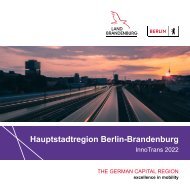 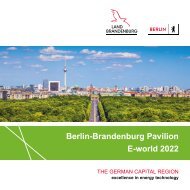 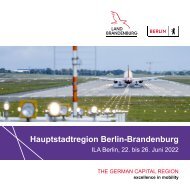 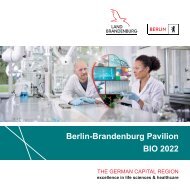 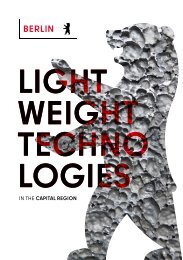 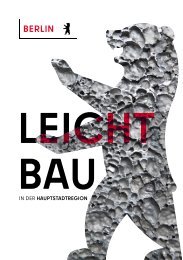 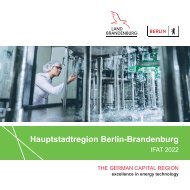 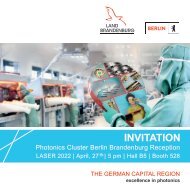 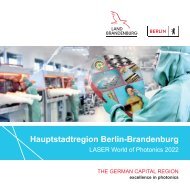 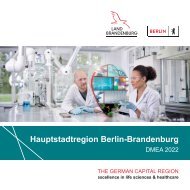 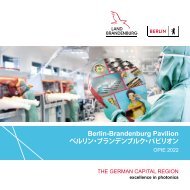