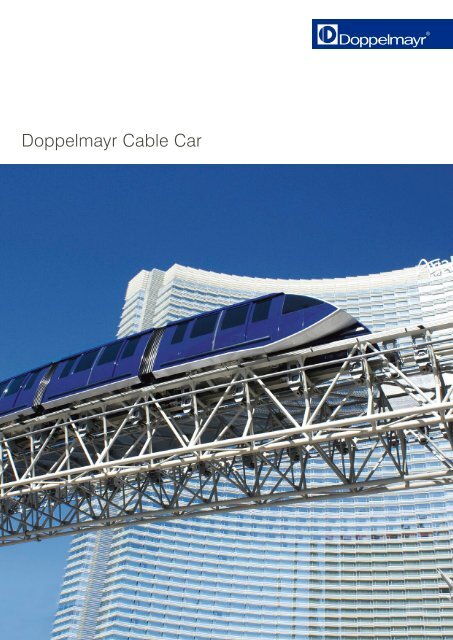 Doppelmayr Cable Car is an Austrian-based

company with a constantly growing portfolio of

the most renowned Automated People Mover

the specific needs of their customers. Their core

Cable Liner ® . It is based on cable propulsion

over other means of transportation.

The APM runs on special guideways and offers

The products of Doppelmayr Cable Car are

suitable for distances up to 9 km (5.6 miles), depending

on the planned system characteristics

such as the location of stations, alignment, and

of the Doppelmayr Group, the world market

more than a century of experience in cable-propelled

technology. The simplicity of the overall

requirements. Each installation meets the high

standards and quality of the industry.

The Mandalay Bay Tram in Las Vegas, USA, is a success story

of the Automated People Mover industry. It was the first Cable

Liner ® built by Doppelmayr Cable Car that went into operation.

The customer needed very distinctive-looking trains and a

guideway that would not detract attention from the surrounding

at the Luxor hotel and utilized an open steel truss guideway,

which is less obstructive than a concrete guideway. The

only eight months from notice to proceed until handover. The

allowed the use of a lightweight steel guideway. With a short

between the hotel properties and to attract tourists from one

of the world’s busiest intersections, Tropicana Avenue and Las

Tram boasting a dynamic and enticing design has transported

by side on an elevated guideway. The five-car trains are propelled

by stationary drive machinery, which performs all essential

and braking. Eliminating onboard motors, gearboxes, and hydraulics

reduces the train’s weight and results in a lighter, less

expensive system that is easier to maintain.

for its unique environment

*pphpd = passengers per hour per direction

its Maglev system with a modern, reliable and, above all,

economically viable system. As part of a political initiative to

increase public transportation use, the airport needed a direct

to resolve its design for Birmingham. Project-specific

machinery, control room, and other system equipment in strictly

and central control room in the system’s mid-station.

the public transportation interchange to the check-in terminal

into an existing infrastructure

trains operate in shuttle mode with a total capacity of 2,500 pphpd.

The APM’s dual-track configuration has been designed to accommodate

and high availability, making traveling within the airport quick

do not depend on guideway frictions, so no guideway heating

is required. Performing flawlessly in even the most challenging

The Toronto project also required a quiet system because of its

proximity to a hotel. Doppelmayr Cable Car’s silent trains with

rubber tires were the solution. With no onboard motors, the cable-propelled

transport directly to the terminal. Toronto Pearson is a

passengers per year. A cable-propelled transit system is among

the cleanest, most sustainable transit options for high-density

role in this transformation, bringing substantial improvements to

Doppelmayr Cable Car is dedicated to creating the most environmentally

system in Toronto relieves shuttle bus congestion in and around

to increase the capacity of the existing APM by adding a

seventh cabin to each train.

Operational, punctual, and comfortable in

even the harshest climate conditions

Shuttle in just 22 months. The system has been in operation

main international and domestic gateway and offers flights to

issues necessitated placing one of the terminals in a relatively

element of the new airport – the new Cable Liner ® Shuttle

is the only connection between Terminal 1 and the remotely

and seamless transfer between the two terminals. The shuttle

transports passengers over a total distance of 3,025 m

The airport required an affordable APM that could be built on

the shifting foundation of a partially dry lakebed. One decisive

factor in the customer’s choice was Doppelmayr Cable Car’s

ability to adjust to ground settlements with its steel guideway

concept. Steel adapters between the steel guideway truss and

for the soil settlements which are predominant in Mexico City.

In a joint venture with Empresas ICA S.A.B. de C.V., who were

and built the APM system on a turnkey basis.

adds a modern quality to the airport’s atmosphere but anticipates

future growth. The system was designed to accommodate

can be expanded to a six-car train, increasing capacity by up

to mirror the city's atmosphere of glamour and excitement, the

the system winds through a maze of high-rise towers connecting

As part of a US $ 9 billion project, the APM system crossed each

be installed concurrently with other constructions. Doppelmayr

Cable Car skillfully handled the challenge of coordinating the

direct interface of the APM project with these three overlapping

construction sites on or ahead of schedule.

“Doppelmayr Cable Car has more than met our expectations,

custom-ordered APM system in record time and their exceptional

conservation throughout its development of CityCenter. “From its

inception to design, development, and construction, we had one

single goal in mind for CityCenter: create a destination that is not

only built in an environmentally sustainable manner, but also operates

every day with an equal commitment to conserving natural

of any kind. CityCenter is Doppelmayr Cable Car’s second

the perfect way to alleviate congestion in the city of canals –

As a fully integrated element of the public transportation network,

Doppelmayr’s Cable Liner ® for Venice carries passengers to the

heart of the city. Having arrived at the man-made off-site parking

Roma offers the starting point to explore the city’s historic

hotel infrastructure and a port for cruise ships.

yielded a beautiful addition to the city. The bright, modern station

design, based on an open concept and made of steel and glass,

was created by Architect Francesco Cocco.

The Cable Liner ® system relieves traffic at Piazzale Roma and

has no emissions of any kind. Pollution is a special concern in

areas where cherished historic architecture must be preserved.

urban environment and offers two trains on a single guideway

which bypass each other via switches at an intermediate station.

performance as a double-track system in terms of headway and

capacity at nearly half the guideway costs.

Maintaining its core principles of simplicity and functionality,

Doppelmayr Cable Car once again identified the most efficient

solution for Caracas – one of Latin America’s most densely

This new mode of transport plays an important role for the

metropolitan area of Caracas and represents a significant improvement

for the entire population.

to handle the challenges and demands of the city: a congested

urban environment and difficult soil conditions, which make the

construction of a metro difficult. The elevated Cable Liner ® system

design of the Cabletren Bolivariano keeps its column and

foundation footprint to a minimum, thus allowing the guideway

to weave through Caracas’s existing developments.

The light APM system allows for a streamlined steel guideway,

which is ideal for overbuilt sites. Instead of the Metro concept’s

The installation features a “Pinched Loop” configuration. With

solution to meet the demands of public transportation.

the highest comfort for passengers

New mobility on a new street

BART’s dreams of adding an airport connector to its existing

rail network. Many years in the making, the Oakland Airport

Car showed that cable technology offers the most affordable,

has expanded its potential system range. The Oakland Airport

for integration in an existing construction), demonstrably lower

its latest advancements, such as Pinched Loop arrangements

solution for Oakland’s needs. By providing an affordable option

for the airport connector, Doppelmayr Cable Car plays an

development and prosperity – without one, visitors using the

public transportation network would have to wait at street-level

bus stops with their luggage.

link between Oakland’s airport and a public transportation

hub at the Oakland Coliseum while providing the backbone

for transit-oriented development along Oakland’s Hegenberger

corridor. Traveling at a maximum speed of 50.4 km/h

(31.3 mph), the bidirectional system consists of four trains with

three cars each and carries 1,500 passengers per hour per

trains glide directly through the bustling terminal at Hamad

International Airport (HIA) in Doha, one of the biggest and busiest

hubs in the Middle East.

outstanding architecture, becoming a central feature of the new

airport. Primary criteria in this best-value procurement were reliability,

minimized structural impact due to the light Cable Liner ® system,

special system features and design as well as the lowest operation

and maintenance costs available for an APM.

Doppelmayr Cable Car’s propulsion concept is ideal for the HIA

system requirements, which call for an indoor system with trains

moving alongside pedestrian traffic in the open terminal building.

The ambitious design could only be realized with Doppelmayr

on pods in a concrete trough

The Cable Liner ® is a fully automated rope-propelled transport

in the expertise of the world leader in rope-propelled transport

system which runs entirely underground. It connects the

northern and southern terminal complex over a distance of

Sheremetyevo is Russia’s largest airport and serves around

A new transport link (Cable Liner ® Double Shuttle) between the

rail station Luton Airport Parkway and the airport will improve

passenger journey time and connectivity to and from the airport

The Doppelmayr Cable Liner ® Double Shuttle will provide a passenger

Cable Car will also be responsible for operating the system

the customer thanks to its capacity, reliability, and energy efficiency.

had this to say: “This investment will encourage and transform

the experience of those traveling to the airport by rail, thereby helping

to reduce congestion on the roads, and confirms our confidence

in Luton’s potential for economic and employment growth.”

The Doppelmayr Group has a large number of similar reference

projects to its name. In the UK, Luton is now the second airport that

has placed its trust in the expertise of the global market leader. The

Air-Rail Link in Birmingham has been operating since 2003.

In this latest project, Doppelmayr Cable Car will be focusing a

special emphasis on value creation for the local area. The partnership

with schools and colleges in Luton will be particularly important

during the implementation phase. Local businesses and

young people are to be involved during construction of the Luton

DART. The system will open for public service in 2021.

from train to plane

Doppelmayr Cable Car’s commitment to quality does not end

when the systems are delivered to the customers. It continues for

the entire lifetime of the system. More than 20 years of worldwide

operations services expertise is reflected in every installation and

provided to our clients as a full-service contract.

In a world of complexity, the uniquely straightforward rope-propelled

environments for sophisticated customers such as transit agencies,

Focus on return on investment

Customers who wish to incorporate a transport system into their

to the operational stage and the entire system lifecycle. A full-service

contract includes all of the required parts, services, and operational

overhead in one simple fee.

Doppelmayr Cable Car works closely with all customers to create

the specific technical and business framework that satisfies all

of their needs. A detailed analysis is performed to determine the

unique operational and environmental variables that will shape

the system design and O&M requirements. Careful attention is

paid to the following:

Definition of objectives and key performance indicators to

A detailed scope of work to specify roles and responsibilities.

activities to Doppelmayr Cable Car at the beginning of the contract

Guaranteed availability of 99.50% (which Doppelmayr Cable

Cost certainty for all O&M services

All of Doppelmayr Cable Car’s expertise included in one simple

Set-up and development of the entire O&M organization,

including training, processes, and procedures, specialized

tools and equipment as well as customized software reporting

Striving to exceed all performance benchmarks.

Maximum technical and business certainty during

and subsystems to maintain asset value.

Full customer oversight over the execution of the contracts. 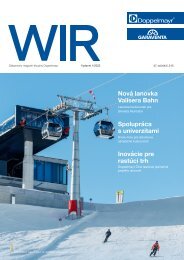 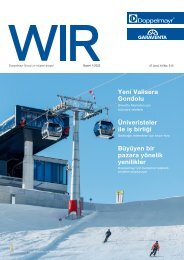 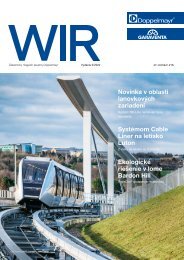 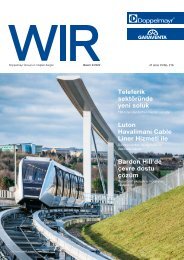 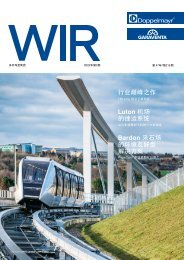 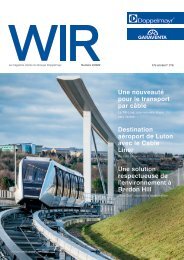 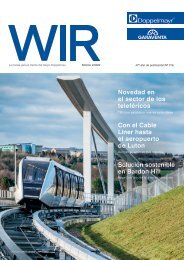 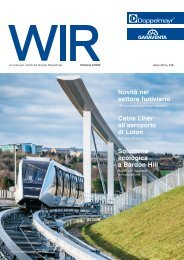 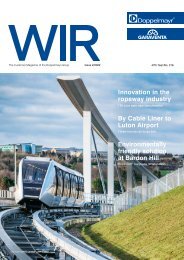 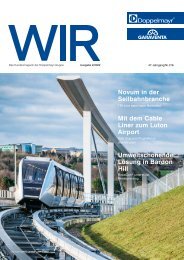 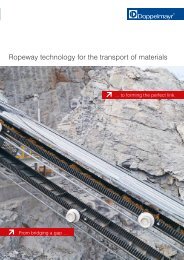 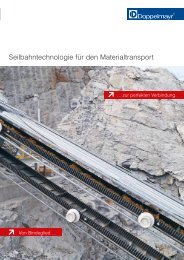 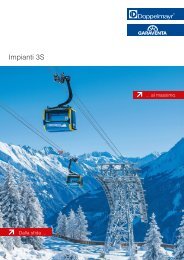 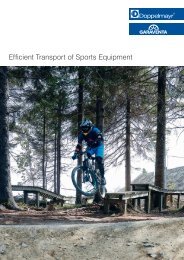