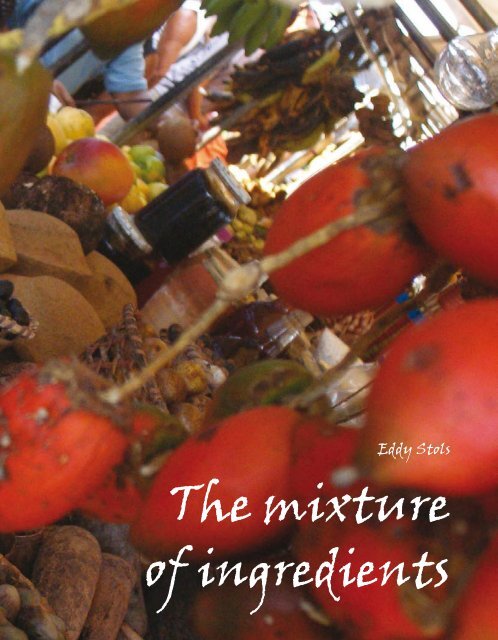 The mixture of ingredients - the Embassy of Brazil

The mixture of ingredients - the Embassy of Brazil

Mashed white carrot has recently been

chefs on Parisian tables, while in Brus-

Brazilian cooks. The re-editions of pioneering

that Brazilian cuisine is claiming its place in the

In fact, in the 19 th Century, European

and brésiliennes (pies or ice creams sprinkled with

Brazil nut). Not to mention the first centuries of

the colonial period, when Brazilian land was the

leader on food globalization – if we consider the

exchange not only between America and Europe,

but with Asia and Africa as well. By Portuguese

of India, sweet potato is introduced in the Japa-

nese island of Kyushu, while cornbread from

als for corn flour, such as the polenta of Veneto.

Above all, the Portuguese benefited Brazilian

palms as well as the raising of cattle and poul-

try, not only European, but also helmeted guine-

Brazilian cuisine is hybrid in its origin and

integrates, in this continuous mixture, ingre-

1 Broth made from tapioca, a grainy starch extracted from man-

Indian flavoring made from a mixture of several spices, main-

dients and preparations that are not only Por-

tuguese and indigenous, but also African and

Asian. As such, it has developed since the begin-

ning as one of the most globalized ones, involv-

ing all regions and social levels, without compro-

mising its originality in comparison to the most

well known cuisines of the Americas, those of

No doubt those enjoy greater fame because

they are more structured cultures and, therefore,

better described by the chroniclers of the con-

Díaz del Castillo praise the riches of the indig-

enous markets and the splendor of the Monte-

the Flemish tapestries enthrone the turkey and

the llama, “the lamb of the Andes”, in their pres-

of their agriculture and cattle raising to the New

World. The grand banquet organized in 1538 by

the conquistador Hernán Cortés, in the capital of

ciency. At that time, the first tavern in Spanish

style was already open for business. Some time

In comparison, the Portuguese-Brazilian

cuisine seems modest and weak. If in Spain the

editorial movement of cooking books was as pre-

cocious and abundant as in Italy or Flanders, in

Portugal it was not until 1680 that Domingos Rod-

during the colonial period. If corn deserves, in

paintings and sculptures, an Eucharistic status of

holy bread given by the Spanish Jesuits, manioc

has never been given any prestige in the iconog-

aphy and is relegated almost as a diabolic root

the edibility of Brazil’s plentiful fauna and flora,

such as the Tratado Descritivo do Brasil (Descrip-

Souza, or the Diálogos das Grandezas do Brasil (Di-

in manuscript. This disregard can be attributed to

the infamous secrecy policy, since it was not con-

venient for the Portuguese Crown to unveil even

more the rich nutritious potential of the Brazil-

were conveyed in publications by travelers and

in Jesuits’ letters. The strategic value of manioc

– which supplied cheap and healthy provisions

for soldiers and slaves – should not be scattered

to the wind. Another possible explanation is

that Portugal paid more attention to the spices

and fruits from the East Indies – permitting the

cia da Orta, to be printed in Goa, India. Nothing

similar is published about the Portuguese-Brazil-

This lesser visibility is a result, in part, of

its own creation process: slow and diffuse, with

less influence from the elite and more popular

participation – notably female, African and even

em 55 (Lisbon’s Splendor and Abundance in

one thousand women that earn a living selling

baked bread and as bakers, on their own or by

commission”, and hundreds of women who

and other game, shrimps and snails, alféloas,

orange marmalades to people who were going

to India and Guinea, or roasted sardines by the

Ribeira docks. Clean, rich and with their “chains

around their necks, jewelry, bracelets around

their arms”, many of them were African, slaves

or freedwomen, announcing the black women of

In so many small ships leaving the docks

in the north of Portugal for the African and Bra-

Venetian Cadamosto (1455) or the Flemish Eus-

they, in this manner, came to taste palm wine, os-

trich egg, turtle meat cut and salted as bacon, or

even elephant meat which was much less tasty.

While the sailors of the East Indies Company ate

in groups of seven from the same tub, with food

loaded with a great variety of delicacies, and each

one cooked their own food to their own taste, al-

they spent their time fishing; on land, hunting

or gathering. This gluttony – and the citric fruits

against scurvy – explains the lower death rate on

Since the beginning of the discoveries, the

acterized by its rare eclecticism, balanced with

products from the Atlantic and Mediterranean

mates, many rivers and the sea at a short range,

ing and fishing with hunting and gathering. In

their kitchen, they alternate between stews, guisa-

the expensive cereals with nuts, legumes and

an diets include so many greens, collard greens,

pumpkins, turnips and onions. Their seasonings

gathered in the fields. Their fruit vary from the

Nordic delicacy of apples, pears and cherries to

granates and almonds. They do not reject any

3 Stew prepared by sautéing the ingredients.

meat. They are noted for the ritual killing of pork

and the sausage making of sarrabulho and chori-

zos. Although they appreciate shoats, lambs and

because they use their cattle more for traction and

dairy products. From the sea, no fish is unwant-

ed, from tuna to sardines – including all mussels.

With this “water gastronomy”, they are the first

to replace the carnivorous excesses of the Middle

Ages with the new fish diet of the Modern Age.

Furthermore, with the influence of the

Middle East through the presence of Arabs and

or fried in the pan, with flaky dough and fruit

preserves in honey and sugar, making use of

culation and the markets, with the Portuguese

being the first merchants to negotiate large loads

of food instead of dedicating themselves to tex-

tiles. In trade with Northern Europe, they sup-

they exchanged for dried herring from the North

Sea, bacon and Flemish cheese, which although

with less flavor, can be better preserved during

Due to this indiscriminate gluttony, the

omnivorous Portuguese were more prepared for

the unknown gastronomic adventures through

the new worlds. For their survival, but also out

of curiosity, they tasted all edible and similar

products, which were susceptible to their cook-

ing techniques. They were not satisfied with the

substitutes for the most appreciated food in Por-

tugal. They also dared to try out novelties, with-

out any guilt over such a paradisiacal abundance,

which was almost sinful.

Not everyone appreciated the local delica-

cies. The Marquis of Lavradio complained, as soon

inventory of the Brazilian cuisine. The beverages

are even worse: “a dirty water made with honey,

the lemonade for the Negroes”.

Fortunately there is no lack of literate ob-

dos Animais e Árvores do Maranhão (History of the

4 Any type of food or snacks.

that registers the mouth-watering baking skills of

extracting the most from manioc for fine flours,

carimã cakes and beijus. Wines and liquors are

extracted from cashews, pineapples and geni-

fish, in a recipe recovered four centuries later by

chefs from Pernambuco. Long-legged birds with

good white meat are found in such quantities as

the capons and as exquisite as the partridges. The

blue land crab could almost be compared to the

dazha, a crab praised by Chinese poets and paint-

ers. Butter is made from manatees’ fat, “each one

making thirty or more pots, and a lot of oil from

the tail”, and from the meat, which is similar to

pork, “sausages and chorizos are made, and sal-

presos 5 taste like the best ham of Lamego” – these

manatee sausages are even sent to Portugal. Friar

tinguishing between the eating preferences of

native Indians and Africans, whom he considers

trustworthy partners in these gustatory experi-

ences. The Negroes, for example, appreciate the

yoroti, a type of pigeon of the woods that, like

the pigeons of the old continent, are faithful to

their companions for their entire lives. Because

of the bird’s behavior, the Africans fed them to

their wives “in order for them not to talk to other

Exiled in his Portuguese prison, the Jesuit

Daniel dreams of tacacá, “a bit of water thick-

ened on the fire with carimã flour, with streaks

of tucupi and the whet of the malagueta”, açaí,

someone eating coddled eggs”. Inside the Bra-

zilian oranges “the largest European would be

loose if inside the Brazilian ones”. Cashew nuts,

which “when roasted, put to shame European

chestnuts”, are mixed with vegetables or “with

almonds and candies, covering the roasted ones

with sugar”. During the hinterland’s harvest,

the inhabitants “feast” on small turtles that have

barely left the egg. “When roasted they are just

like torresmos, almost as good as the pork ones.

A few months old, about 5 centimeters big or

more, cut in the chest for cleaning and filling

with spices, vinegar, onions and roasted, they

are admirable”. From each large turtle, they

and vegetables stew, sixth, the soup, seventh, the

6 Any cooking procedure made with diced meat, fish or chick-

en, simmered with onions, parsley, pepper, nutmeg and other

are valued in these

which seem to praise them

in the same way that

of the French sweet shops.

rice. These are the most usual ones, but in pri-

vate homes they just stew the meat. If it is one of

the big ones, just one is enough to feed a whole

yolks very much, and, especially, turtle eggs are

“almost all yolk, with a small circle of egg white,

The Brazilian ingredients are valued in

these nostalgic recollections, which seem to

praise them in the same way that Marcel Proust’s

words celebrated the Madeleine of the French

sweet shops. In the absence of recipes and

can recover the history of Portuguese-Brazilian

cooking. These texts are essential to boost its self-

esteem, which is far too low, asphyxiated by the

foreign character of the gastronomic temples of

der the weight of hunger and malnutrition. 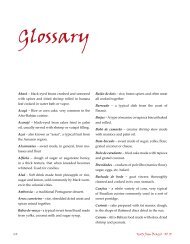 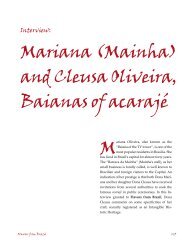 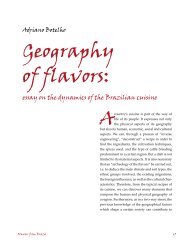 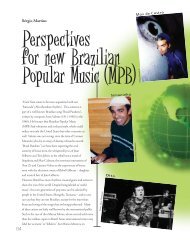 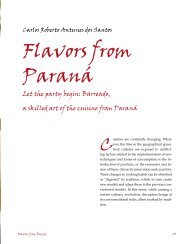 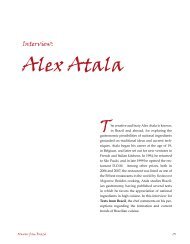 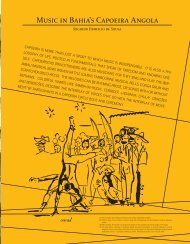 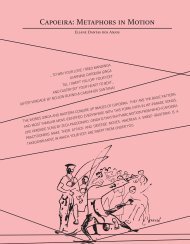 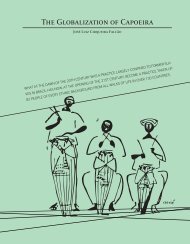 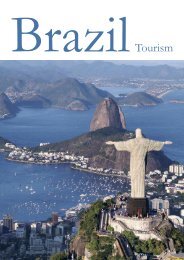 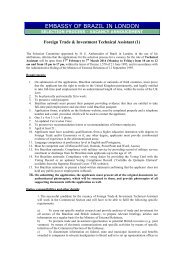 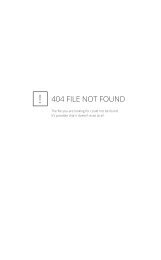 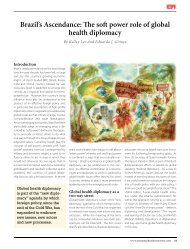 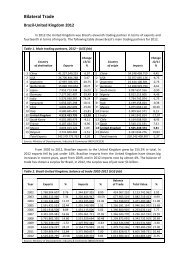 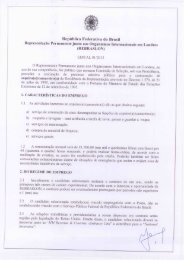 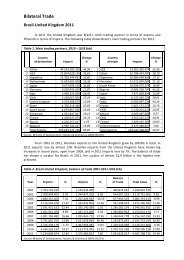 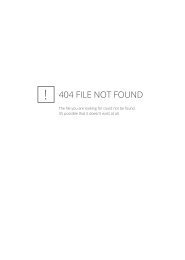 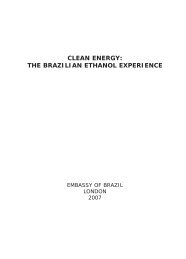 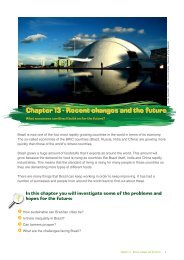 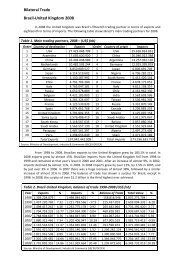 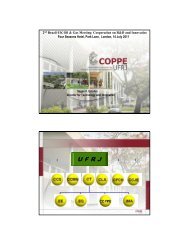 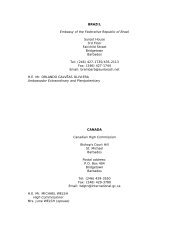 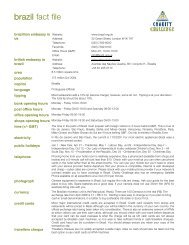 Magazine: The mixture of ingredients - the Embassy of Brazil